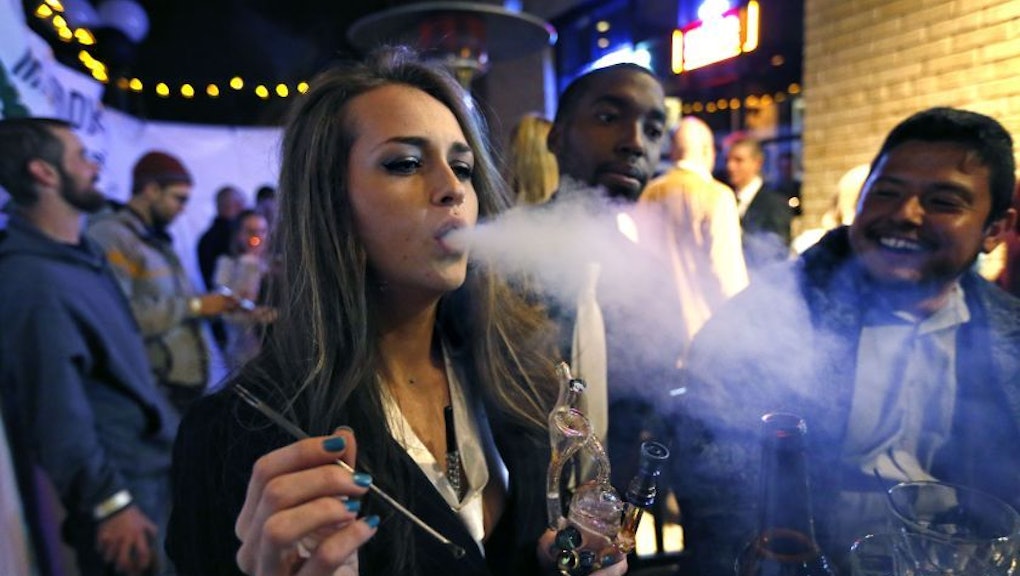 After Four Months of Sales, Here's How Much Colorado Has Made Off of Marijuana

A lot: On June 9, state tax collection numbers were released, and Colorado is making a killing. The state saw a record high of more than $22 million in total retail sales; the tax man will walk away with $3.5 million in sales and excise taxes.

April sales likely surged from 4/20 holiday sales that brought hundreds of tourists to town to celebrate. The numbers are up 15% from the previous month, which saw $19 million in total revenue. January and February brought in roughly $14 million, respectively.

Weed by the numbers: In the first three months of legalization, Colorado collected $7.3 million from just recreational taxes and $12.6 million in licensing and fees.

Medical marijuana continues to outsell recreational pot. In April, medical marijuana dispensaries made $31 million, down from March's revenue  which brought in a total of $34 million. However, the state makes less money on these sales since medical pot is taxed much less than recreational weed. Out of the $18 million collected by the state thus far, $11 million has been from recreational marijuana.

As the numbers pour in, more and more dispensaries are opening across the state. By the first week in June, over 200 dispensaries were licensed to sell. (Over 500 total shops in the state are eligible to get licensed for marijuana sales.)

According to Gov. John Hickenlooper, Colorado's total sales are expected to reach almost $1 billion. By the end of the next fiscal year that starts in July, Hickenlooper anticipates that the state may collect $114 million of that in taxes and fees.

Not everyone is seeing green just yet. Though approval rates in the state has gone up, issues about regulating edibles remain a cause for concern. There have multiple incidents involving edibles, including the death of a young boy who jumped off the balcony after eating a THC-laden cookie. There have also been some reported home explosions because some people have tried to home-brew hash oil.

New York Times columnist Maureen Dowd traveled to Colorado to try out an edible, which caused a stir. However, Dowd's all-night hallucinatory trip from a candy bar was likely induced because she was unaware of the correct dosage.

Obviously, there are still some kinks that need to be ironed out. But the new money rolling into the state could be motivation for the state government to pass harsher regulations and keep the marijuana business in tact. After all, $114 million goes a long way.