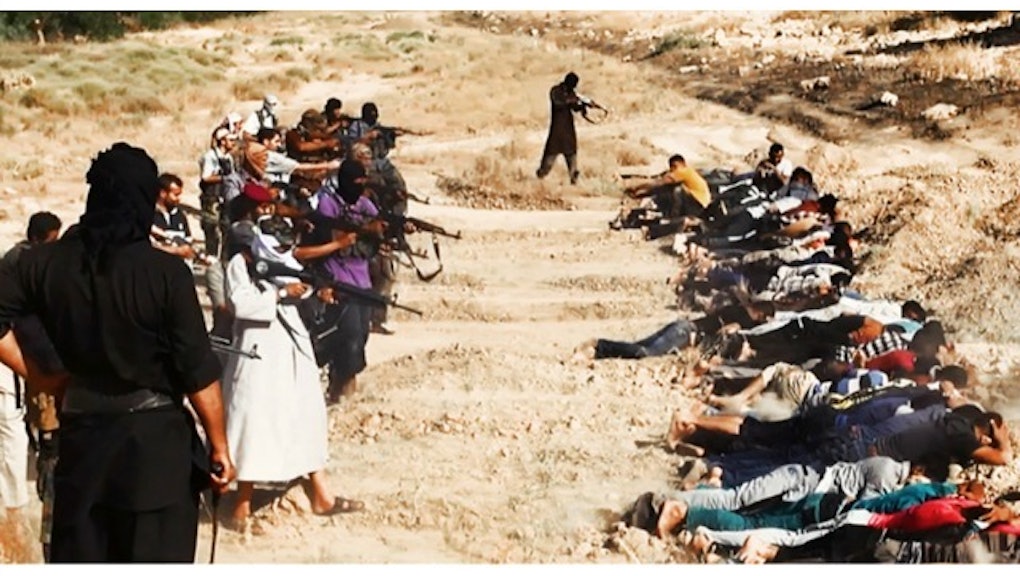 Could the Terrorist Group That Executed 1,700 People Force the U.S. Back Into Iraq?

The news: This all feels like the darkest days of the Iraq War.

On Saturday, members from the Islamic State of Iraq and the Syria (ISIS) Sunni insurgent group posted these pictures to their Twitter account claiming to show the mass execution of 1,700 Iraqi soldiers.

ISIS, an Islamist terror group so extreme that al-Qaida disowned them, has taken control of most of the northern territories in Iraq as part of a strategic operation planned since 2006. According to Iraqi officials, the group’s dominance continued into this week. They seized the city of Tal Afar on Monday, which came after insurgents had already gained power in Mosul, the country’s second largest city after Baghdad, and Fallujah.

Brutal images: Some of the captions on the images blatantly mock Shiites and threaten the U.S.

Shiite leader Grand Ayatollah Ali al-Sistani issued a statement urging all groups to “exert the highest possible level of self-restraint during this tumultuous period.” (This came a day after he called upon every Iraqi to take up arms in support of the Iraqi government.)

ISIS has reportedly captured U.S.-supplied army equipment. They posted a Twitter picture of an American humvee being tested by an ISIS commander, and blackhawk helicopters have been allegedly seized from the airport in Mosul.

Concern in the region is growing, and the geopolitics of the situation have only made things more complicated. The Syrian government has aided the Iraqi government who is attempting to fight ISIS. Even Iran and the U.S., who have an acrimonious relationship, have come together on the same side.

U.S. assistance: While President Obama is adamant that he will not deploy U.S. combat troops to Iraq, the president informed Congress on Monday he would send up to 275 military personnel to provide support and security for U.S. assets and the country's embassy in Baghdad. The U.S. has sent also a warship into the Gulf, and the Wall Street Journal reports the U.S is flying authorized secret drones over Iraq.

Resolving the sectarian rift is pivotal to the end-strategy: While the U.S. may send some level of military assistance to Iraq, the real issue at stake is the fractured relationship between Shiite and Sunni factions. On Sunday, President Obama made it clear the prerequisite for American military aid was that Iraqi Prime Minister Nuri Kamal al-Maliki (a Shiite) must make an effort to end sectarian issues. Obama believes that a multi-sectarian government would help assuage both sides of the political spectrum and potentially serve as a release for the violence that's rocked the country since the withdrawal of U.S troops in 2011.

As the New York Times reports, “Deep sectarian divisions have persisted since Saddam Hussein was ousted in 2003. As recently as 2010, for example, Mr. Obama personally pursued an initiative asking Mr. Maliki to share power with the leader of a bloc representing many Sunnis; the plan failed.”

ISIS’s desire for a caliphate is fueling the conflict in Iraq and the country is teetering on the edge of a full-blown civil war. It is hard to tell if mending a fractious relationship would even quell some of ISIS’s advances at this point. So while the Obama administration may be pushing that as their contingency plan, there is a lot of evidence that U.S. involvement will not stop there, which is a hard pill to swallow for a country that only just left the War in Iraq behind.