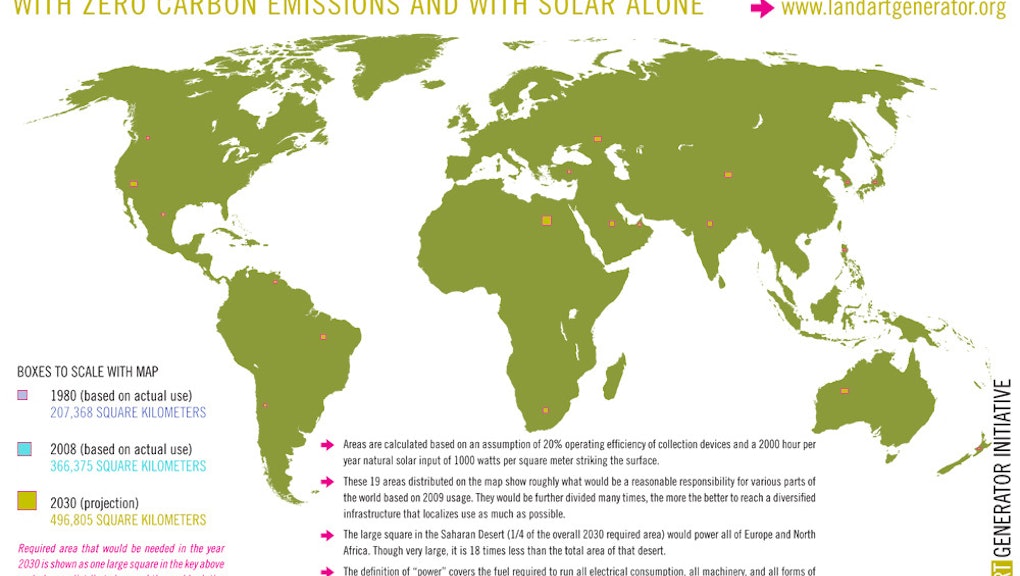 The news: Here's how much solar energy technology it would take to power the entire world, based on data from a research thesis by Nadine May of the Technical University of Braunschweig in Germany.

The background: This map traces the ideal deployment of solar energy plants in the Sahara Desert to generate electrical power for the world's population. The intensity of the sunlight pressing down on the desert makes the area ideal for generating solar power. May's thesis follows a long tradition of engineers exploring the idea of colonizing the Sahara with solar plants: Such plans were originally conceived in 1913 by American engineer Frank Shuman and again explored in 1986 by German particle physicist Gerhard Knies.

Still, this map is a good illustration of how little space would be needed to power the entire planet. According to May, some 3.49 million square kilometers are available for solar thermal power facilities in Morocco, Algeria, Tunisia, Libya and Egypt alone. Worldwide, the potential high-energy solar sites far outstrip any plausible need.

From the Land Art Generator Initiative, here's a more realistic depiction of what a distributed power network that could fill the world's needs would look like:

You can see that the best areas for solar energy collection are the world's deserts. And though the theoretical solar facilities would be very large indeed, it wouldn't take a gargantuan amount of effort to switch over. The United Nations estimates 170,000 square kilometers of forest are destroyed each year; three years of similar effort into solar power conversion would do the job. China has 1.2 million square kilometers of farmland alone, more than two and a half times the amount of area that would be needed to power the whole globe by the 2030 projection.

Why we should do it: There are numerous advantages to solar energy. One is that it doesn't pollute, so the generation process is carbon-neutral. The other is that the sun gives us energy for free which will never run out. Here's the annual energy potential of renewable versus nonrenewable energy sources:

Solar energy clearly outstrips the potential of every other source combined. It's the fuel source for the planet's incredible biodiversity, after all: Plants are essentially tiny solar generators.

Clean energy remains expensive, but the cost of wind and solar has dropped 50% since 2008. For some applications, like homes, it's cheaper than power supplied from other sources. The technology is rapidly approaching cost-competitiveness compared even with coal, which is getting much more expensive in the U.S.

While the process of building and installing solar panels will actually require a lot of energy (including dirty coal), researchers say that the panels pay back the cost of that energy in just one to two and a half years, while the panels themselves have a life expectancy of around 30. And it's 89% cleaner than other sources of energy. This plan is sounding smarter all the time.