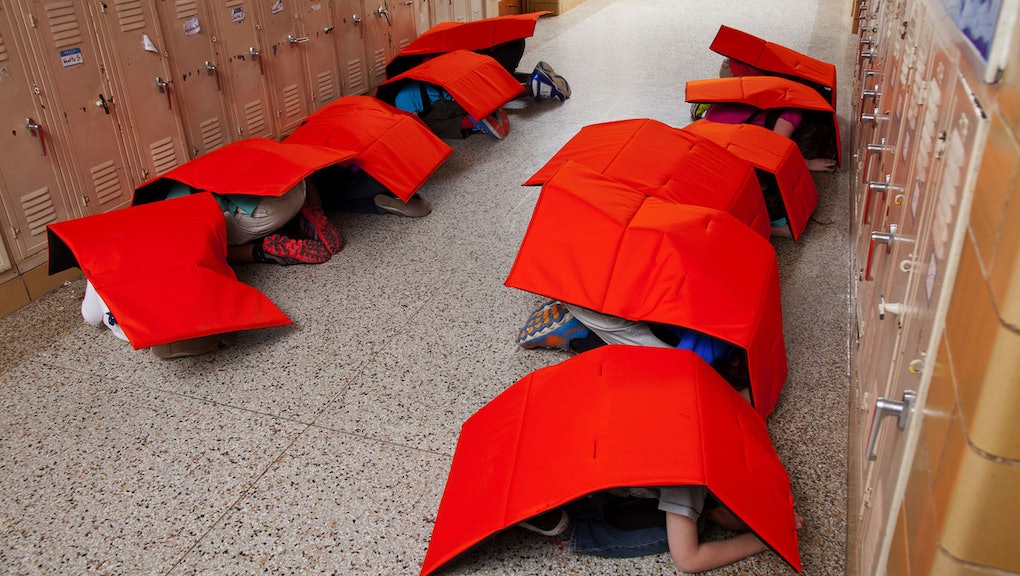 No. But that hasn't stopped people from buying them anyway.

It's been almost 18 months since the Sandy Hook Elementary School massacre in Newtown, Conn., and Congress has done virtually nothing to curb the routine trend of school shootings in the U.S. Rather than making any real attempts to regulate firearms or reduce gun violence, Republicans have been pushing for more guns in more places via looser "open carry" gun laws.

But where government has failed, private industry has stepped in with an impractical and panicky solution: bulletproof school supplies like blankets, backpacks and whiteboards.

Yes, Americans are so worried about the next school shooting (which are happening on average once a week) that they feel the need to cover their children in armor. Last week, security company ProTecht debuted fold-out bulletproof blankets rated to resist pistol and shotgun rounds. Other companies like Maryland's Hardwire, which is making bulletproof whiteboards, and BulletBlocker, with their bulletproof backpacks, have also made waves as Americans' sensitivity and fear of school shootings has climbed in the past few months.

A melodramatic advertising video for Bodyguard seems designed to stoke parental fears, saying that "crazed gunmen have entered our schools prepared to kill our children and teachers."

Do they even work? According to Mashable, not really. The bulletproof blankets cost $1,000 a pop and have to be distributed during an emergency to students. The blankets are more like a shield than armor, leaving the sides of children exposed, and would require substantial training to be effective.

And what about the whiteboards? According to Hardwire, they "blend well with classroom [and have] no negative psychological impact on students," while still being able to "absorb multiple magazines of ammunition from handguns or shotguns without ricochet or injury." Of course, that assumes the teacher is able to maneuver themselves and the board in time to defend from oncoming bullet fire. And the backpacks? They are quite heavy, only provide limited protection and only protect the wearer against bullet fire from behind.

There's also no reason to suspect the presence of such measures would deter anyone. Increased security hasn't slowed down mass shootings after Sandy Hook.

Arguably, something is better than nothing, but by recommending the use of these products, schools would be all but officially giving up on an real efforts to deter gun violence. Besides that, experts are pretty skeptical about such products, saying they are expensive and ineffective. Better drill processes, good student supervision and hiring an additional school resource officer or psychiatrist could cut down the death rate from shootings or prevent them from happening at all.

Despite that, ProTecht says that sales of the bulletproof materials have "far exceeded our wildest expectations" in just 10 days. American schools have spent around $11,000 per student annually as of the 2010-2011 school year: At $1,000, they'd be a substantial burden on school budgets in exchange for what seems to be mediocre protection standards.

What should we actually do, then? The United States could theoretically do what most of the rest of the developed world has done and introduce stricter gun control measures, including mandatory background checks for gun purchases, mental health screenings for potential gun purchasers, gun buybacks and further limits on the availability of certain classes of firearms. Many gun-rights advocates will argue that such measures are pointless and ineffectual, but most of those points are distortions and lies.

And compared to other developed nations, the U.S. has a wildly disproportionate number of gun violence of all kinds.

Finding ways to keep guns out of would-be shooters' hands in the first place should be the first priority for anyone looking for a realistic solution to America's gun violence epidemic. But terrified people grasping at straws to protect their own children because Republicans in Congress think gun rights and the NRA are more important than the country's safety — that's just the price of liberty, apparently.