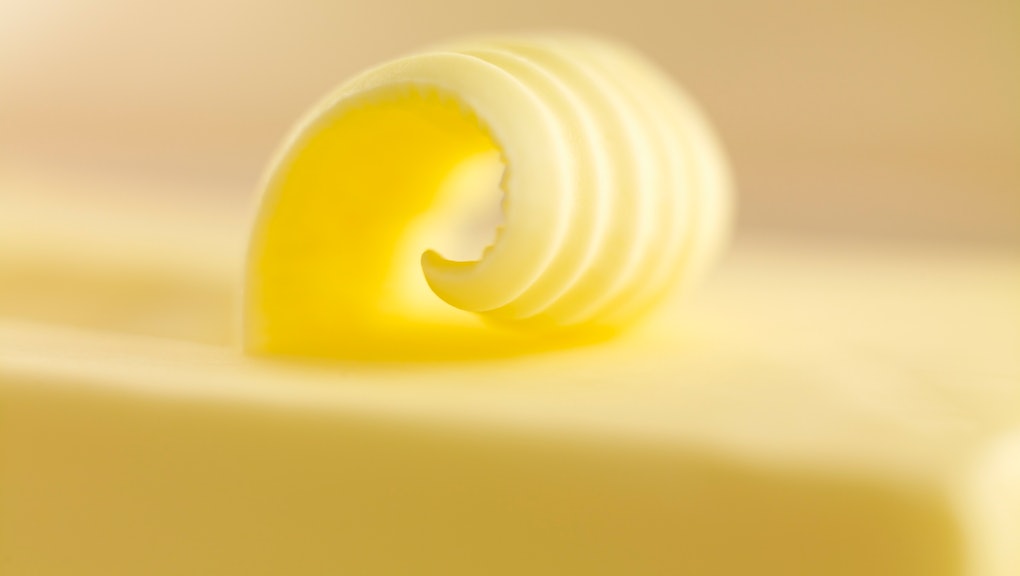 There May Be Great News for People Who Love Butter

If you're looking out for your health, you would probably avoid slathering your food in this much butter:

In the battle against poor health, however, fat has been unfairly vilified.

Gorging on a dozen cupcakes is still overwhelmingly bad for you. But substituting something totally void of fat, like a lean, skinless, boneless chicken breast, in favor of an option with a bit of fat, like an olive oil-brushed salmon fillet, is actually a better choice. That's because fat, despite what your parents may have told you at dinner while passing the "I Can't Believe It's Not Butter," actually has some health benefits. Fat in foods, particularly the kind in olive oil, helps make you feel satiated by protecting your blood sugar levels from the sharp peaks and drops that eating carbohydrates causes.

Here's how it works: Sugary foods raise your blood sugar, making you feel elated and satisfied, but the buzz is short-lived. Once the high begins to fade, you're left feeling hungry for more. If the food you just ate contains enough fats and protein, however, your blood sugar won't rise or plummet as dramatically.

Add peanut butter to celery and you've got yourself a well-balanced snack. Image Credit: Flickr

Processed food companies jumped on the low-fat bandwagon of the 1980s and '90s (remember the SnackWell's craze?) and began removing fat from their products. Unfortunately, they replaced oil and butter with high-fructose corn syrup (sugar) and more carbs. The result? A lot of hungry people.

The details: While fat is no longer seen as the sole culprit of wide waistlines and heart disease, the jury is still out on how much oil and butter are safe to consume. After a study published in the journal Annals of Internal Medicine found that there is no evidence to support a direct link between saturated fat consumption and an increased risk of heart disease, public health experts railed against lead author Rajiv Chowdury of Cambridge University, citing errors in the paper and claiming the findings would wrongly convince people that it was safe to gobble down butter-soaked shrimp and gorge on chicken-fried steak.

Earlier studies support Chowdury's claim that fat isn't the problem. Yet they also suggest that red meat and dairy could still be associated with health problems. For example, a study published in the New England Journal of Medicine found that people who ate a "Mediterranean diet" — one high in olive oil, avocados, nuts and fish (all high-fat, low-saturated fat foods) but low in dairy and completely absent red meat — were significantly less likely to suffer from stroke than people who ate a low-fat "American" diet. That study had a few problems as well, namely that in the beginning of the trials, the low-fat dieters didn't stick to their low-fat regimen. When the researchers noticed they were offering more intense check-ins and guidance to the Mediterranean group, they began providing the same guidance to the low-fat group, correcting the problem.

The skinny on fat: Eat a variety of foods, especially fresh fruits and vegetables, and balance out your intake of carbs (like fruits, bread, cereal and potatoes) with protein and fat (eggs, fish and nuts).