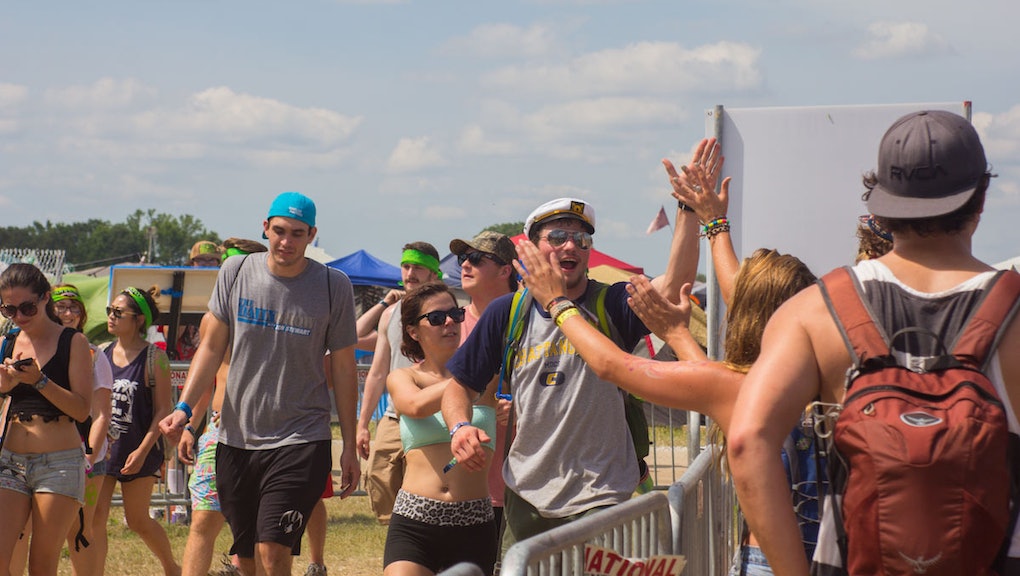 The 37 People You Meet at Bonnaroo

If you describe Bonnaroo to anyone who hasn't been there themselves, it invariably sounds like hell. For four days, 90,000 people from all over gather in a 10,000-person town where, by mid-June, the temperature is regularly hitting 90 degrees. There, they pitch campsites that, by morning light, become sweat lodges. There are no toilets. It costs about $7 to shower. If you want to go to bed before 4 so you're ready to rise with the sun at 6, you should prepare yourself to feel Skrillex pulsing through the campgrounds and down your spinal column like a stampede of buffalo who've just dosed on MDMA.

If you speak to most anyone who's been to Bonnaroo, though, you'll hear those same exact things in a positive light. These are not delusional people (for the most part). They just genuinely love Bonnaroo. That's because in the abstract, Bonnaroo is a nightmare. In reality, it's saved by its audience and the stories they bring to the farm (and it's still kind of a nightmare). These are the people you meet at Bonnaroo:

"I was hulked out last night, chasing Thor. Definitely just waking up."

On Friday the 13th of the 13th ever Bonnaroo, especially, they take a more elaborate approach to costuming.

All photos by Liran Okanon

"We got the beard on Etsy."

But every Bonnaroo has its own lore:

For instance, the Bonnaroo banana:

"I go to tons of festivals. Bonnaroo is my favorite, hands down. I have yet to meet an asshole." (When we left him, he was in search of a man he and his friends referred to as "fuck boy.")

And its own inadvertent heros:

"Well, we wrote 'Funk' and then I got sunburned."

"I forgot my fucking clothes this year so I made these out of bed sheets."

And its PolicyMic photographers:

Alongside those who, on flag day, dressed up in America.

"Did you know it was flag day?"

"Actually, I had heard just now, but I forgot I was wearing these."

"Oh you want the hero pose?"

"We're making an awareness campaign. Because flag day is an underappreciated holiday."

It turns out a lot of the most prominent flags at 'Roo were stolen:

"So. I'm from Jackson, Mississippi and you can't say my name because this is a federal crime ... It comes from the Lamar Life building — the first skyscraper of Jackson, Mississippi. It's got like gargoyles on it. It's about 13 stories up in the building, then you gotta climb onto the roof, go up this sketchy ladder. Then you gotta break the chain thing that gets up to the part where the flag is, and the pole goes up — I was really drunk ... It was raining, too. ... So we go up there, I climb up this pole, and I'm slipping — I'm about to fall, the governor's mansion is right there, I see like three cops pass by down on the road ... So I took the flag, and then I went home."

"I wanted the American flag and they had it, so I took it. Do you see how big this thing is?"

Meanwhile, someone in Kentucky had the same idea.

"I've had several marines — army guys — get mad at me because I stole a bunch of flags from some rich people [to hand out at Bonnaroo] and I learned you can tell a lot about Americans by the quality of their flag. A lot of Americans have really, really nice houses, and you come to take their flag and it's not stitched — like this — it's some cheap $5 plastic thing."

"So you're like Robin Hood? Taking from the rich and giving to the poor?"

"I don't care how much money you make."

There are always people taking extra steps to keep their group together.

"You gotta be aggressive, there are only 18 subchannels here and there are 100,000 people. You gotta be assertive. Walkie talkies are definitely not the move."

And some people take permanent steps to keep their Bonnaroo crew together.

"Can I take your picture?"

"Shouldn't you have just shrugged?"

"Hell yes is what she said when I proposed."

"Well, the shrugs are just because they're free — you know, hugs, sometimes come Sunday on Bonnaroo it's like 'Eh, maybe not a hug?' But I still love people, and it makes people smile, turns their frown upside down. The proposal was killer. We were at the fountain and she was trashing her old wedding dress from 10 years ago or whatever — she was wearing it and putting paint all over it. So I was going to say, "Are you done? Do you want another one?" But I couldn't even do that. She was turned around putting paint on everybody, so I'm down on one knee and everybody's going 'Turn around! He's proposing!' Finally she turned around after about five minutes and she hugged me on her knees."

"I dropped to my knees."

Or the people who founded the Canadian embassy:

"We actually parked next to each other [last year], and she showed me to a camping spot. And she had the paints and everything so it was really a group effort. I guess I'm the ambassador because now I live in Nashville with her ... My friends drove back after Bonnaroo, I flew back like a week later."

"We flew back and forth to see each other all last year, and we're going through the immigration process now ... It's our one-year anniversary."

And then there are the locals who don't leave,

"361 days out of the year [Manchester] is still the same. It's very slow-paced, small-town."

"I worked at City Hall for 32 years and it was just, you know, just a little farm type community."

And the hitchhikers who can't.

And the rest, who wish they never had to.