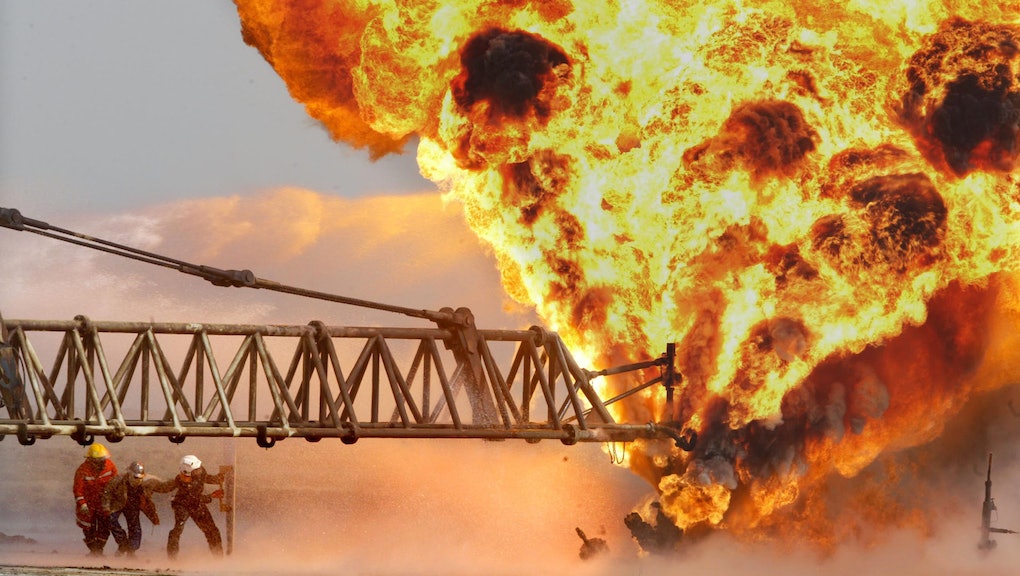 The 'Nightmare Scenario' for the World Is Now Happening in Iraq

The news: For the past month, oil prices have been on a dramatic rise after the recent surge in activity by the Islamic State in Iraq and the Levant (ISIL) insurgent group expanded militant-controlled territory within 100 miles of Baghdad.

The climb stalled as government and Shiite forces (including, according to some reports, segments of Iran's Quds Force) stabilized territorial control, but experts warn that an ISIL advance toward southern Iraqi oil fields could disrupt the energy market, causing oil prices to skyrocket into a so-called "nightmare scenario."

Societe Generale oil strategist Michael Wittner writes that if the Basrah port complex is disrupted, "Saudi Arabia would not be able to replace a total disruption of Basrah exports on its own; a release of IEA strategic reserves would also be required." Ultimately, this would result in prices rising to $120-125 a barrel, up from around $106 now. Combined with the ongoing crisis in Ukraine, Iraq's unfolding insurgency could push world closer to massive oil shock. And that would be really bad for world economies still recovering from a major, multi-year recession that's sent millions out of work or into poverty.

How likely is it? Fortunately, some perspective shows that most of Iraq's oil capacity is located in the still-secure southern region of the country or in the well-defended Kurdish autonomous region in northern Iraq. Cue this map from Morgan Stanley's Adam Longson:

ISIL insurgents are still running high off their victory in Mosul over a tired Iraqi Army regulars and their incompetent government. By some accounts, ISIL was able to rout a force that outnumbered them 40 to 1. But some 250,000 troops and armed police, not to mention countless Shiite militias (many of them recently created by Prime Minister Nouri al-Maliki's government) stand in the way of their claimed march to Baghdad. While ISIL has support from other opposition groups, including former elements of Saddam Hussein's Baathist military, most analysts say the insurgents stand little chance of advancing from their strongholds in Sunni areas of Iraq or deposing the Shiite-run government.

That's not to say Iraq isn't rapidly devolving into a total mess (or, more pessimistically, remains one after the U.S. military withdrawal). Regions controlled by ISIL will likely experience a total economic collapse. If and when the Iraqi government is able to hold the line against the ISIL's advance, it will be doing so in a fragmented country that will likely remaining teetering on the edge of civil war for the foreseeable future. And, as a result, a total disruption of Iraq's oil-producing capability remains a relatively remote possibility.

What a mess, right? And while foreign investors and commodity speculators remain skittish about oil production, ISIL militants are conducting mass executions of their real and imagined enemies among civilians and surrendered security forces. If their propaganda on Twitter is real, they may have murdered as many as 1,700 persons in the past week or so, marking one of the biggest cruelties to occur in the nation in the last few years.