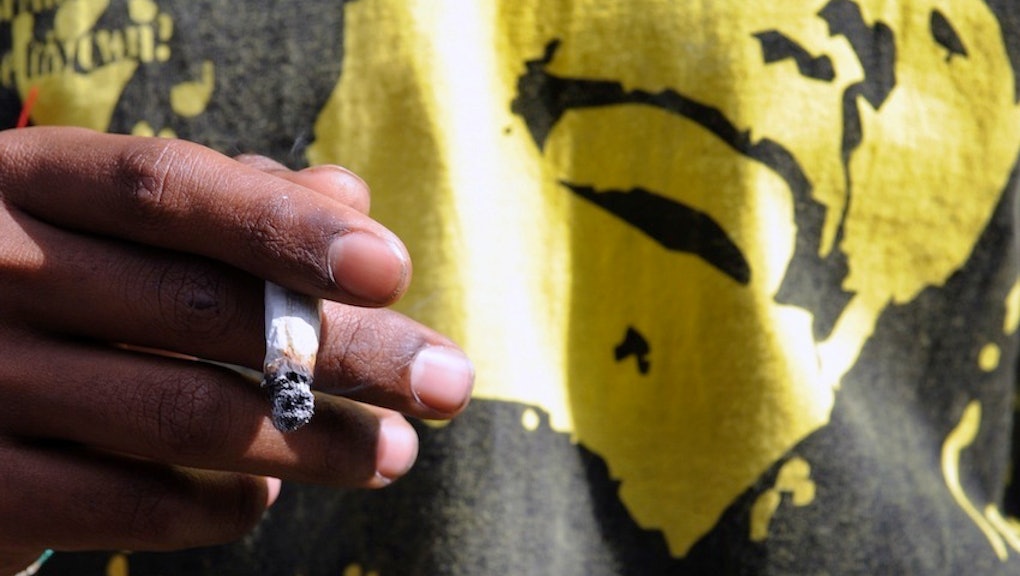 Jamaica Takes the Step on Marijuana That the U.S. Won't

The news: Jamaica is finally moving to decriminalize marijuana.

It has made possession of up to two ounces a ticketable, rather than arrestable, offense, which is the first step in addressing the widespread problems caused by keeping weed illegal in a population that uses it widely both socially and culturally.

Marijuana enforcement over the last several decades has created a swath of problems that the Jamaican government now hopes to address. As the nation's minister of justice explained, "Too many of our young people have ended up with criminal convictions after being caught with a spliff, something that has affected their ability to do things like get jobs and get visas to travel overseas."

Better late than never. Jamaica is a worldwide icon of weed culture. It is home to legendary and globally recognized Rastafarians like Bob Marley and Peter Tosh. The Rastafarian minority smokes weed for spiritual purposes, and many Jamaicans have long relied on it as a medicine for aches and pains. So why did it take them this long to legalize a plant so central to their population?

While America is being mellow about weed, Jamaica has a chance to legalize it. Jamaica is the largest regional supplier of illegal marijuana to the United States. In an attempt to curb trafficking, the U.S. has been heavily involved in Jamaican drug enforcement for decades. Jamaican lawmakers have kicked around the idea of decriminalizing or legalizing it, and even proposed legislation in 2001. However, it was never implemented for fear of sanctions or other reprimand from the U.S. Meanwhile, the U.S. continued influencing Jamaican authorities to fulfill the U.S. agenda, raiding drug operations and ousting longstanding kingpins. Then, in 2012, Colorado and Washington legalized marijuana. The very same Justice Department that kept pressure on Jamaica to maintain prohibition decided to look the other way at home.

The takeaway: This moment of self-contradiction from the U.S. provides an opportunity for Jamaica to make a practical change. The intolerance of cannabis arose from the U.S.-dominated global community, and has never made sense for Jamaica. It's one of many nations, like India or China, where cultural use of cannabis dates back many centuries, but has been condemned by more recent Western influence. At least the tide is finally turning.