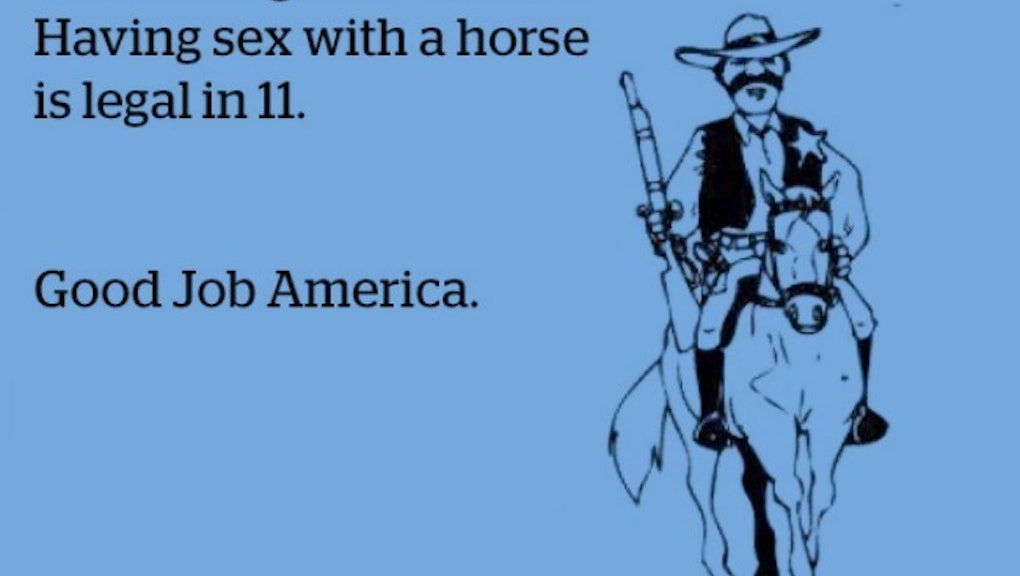 This popular Facebook meme suggests that it's much easier to have sex with an animal than to smoke a little herb — legally, that is. But is that accurate?

Unfortunately, yes. There are 11 states, the District of Columbia and a handful of territories that have stricter laws regarding marijuana than bestiality. What a country.

(Note: This image does not include recent laws passed by the state of Alabama against zoophilia.) Image Credit: Wikipedia

Why do so many states lack prohibitions against bestiality? In many cases, it's because unconstitutional sodomy laws associated bestiality with gay sex, often in the same criminal code. When the sodomy laws got thrown out, so did those regarding bestiality. Other states decriminalized human-animal sex because research by sexologist Alfred Kinsey and others indicated such prohibitions were most likely to affect minors experimenting with their sexuality. And as VICE's Mark Hay notes, the issue doesn't get revisited often because "nobody wants to talk about bestiality until someone f*cks a horse."

This isn't to say there's a significant link between marijuana prohibition and the lack of bestiality laws, but it's just further proof that state laws and sentencing guidelines can be arbitrary and capricious, penalizing some people harshly for minor offenses while letting others conduct what's probably a lot worse go completely unaddressed.

Here's a rundown of the states where you can likely get away with sexually abusing an animal, but get busted for smoking a joint.

Wyoming does not have any case law on sodomy. That's good for humans, but the state incidentally lacks a distinction for sexual predation on animals.

According to NORML, possession of marijuana of less than three ounces carries a misdemeanor penalty of one year in prison and a $1,000 fine, while possession of more than three ounces carries a felony penalty of five years incarceration and a fine of $10,000. Some state legislators, however, are pursuing a bill to decriminalize less than one ounce of marijuana.

Nevada has many laws prohibiting cruelty toward animals and, according to Anthony Podberscek, used to criminalize bestiality with life in prison. However, the state currently does not have any laws regulating bestiality.

Marijuana possession in Nevada comes with hefty fines. The fourth arrest carries a minimum of one year in prison and a $5,000 fine, while intent to distribute bears a one- to four-year mandatory minimum sentence. Other laws punish cultivation, paraphernalia and sale or delivery with mandatory minimums of one to several years.

New Mexico likewise lacks specific bestiality laws. But while its marijuana regime is "less draconian" than other states, the Marijuana Policy Project notes that the first account of possession of one ounce or less for non-medical purposes still brings a $50-100 fine and potentially 15 days in jail. The second offense (or possession of more than an ounce) can lead to a $1,000 fine and a year in prison. Distribution and cultivation are felonies and can carry a sentence ranging from 18 months to 18 years.

The Longhorn State still lacks a formal prohibition on animal-human sexual contact, unless it happens in public. Then it's a class A misdemeanor.

Texas made an astounding 72,000 arrests for marijuana-related offenses in 2012, with 98% of them for simple possession. Possession of two ounces or less carries up to 180 days in jail and a $2,000 fine, with penalties steadily increasing after that. A sale of more than 2,000 pounds can result in a sentence as long as 99 years. African-Americans are more than twice as likely to be arrested as whites for marijuana-related offenses, despite similar rates of use.

Possession of less than eight ounces of marijuana is a misdemeanor, mandating up to 45 days in jail and a maximum fine of $250, while all other offenses are misdemeanors or felonies punishable by at least one year of incarceration. Probably because the state's anti "sodomy" and "buggery" laws conflated bestiality with gay sex and were later deemed unconstitutional, there's nothing on the books prohibiting human-animal sexual contact in Kentucky.

Make all the jokes you want, but West Virginia has a sizeable array of anti-bestiality laws and still there's nothing explicitly outlawing zoophilia.

Possession of any amount of marijuana is a misdemeanor punishable by up to six months in jail, as well as a $1,000 fine. Sale or distribution of any amount carries a mandatory minimum sentence of one year and a fine of — wait for it — $15,000.

A bill to criminalize human-animal sexual contact got laughed at by Ohio legislators, and the state lacks specific bestiality prohibition (though authorities have prosecuted the act under animal cruelty laws).

Meanwhile, Ohio punishes possession of less than 100 grams with a relatively light fine of $150. But jail times for possession steadily increase from 30 days for 100-200 grams to eight years mandatory minimum for anything over 40,000 grams (around 88 pounds). All sales of marijuana are felonies carrying various amounts of jail time. And any marijuana-related offenses might cause someone to lose their driver's license.

New Jersey is only now considering a law against bestiality, and previous animal cruelty charges against a man for molesting cows were dropped in 2009 due to the lack of a specific prohibition.

Possession of more than 50 grams of weed (around 1.75 ounces) is a felony in New Jersey, carrying a sentence of 1.5 years and a $25,000 fine. Possession of less can carry up to six months in jail and a $1,000 fine. Other marijuana-related offenses carry hefty time in prison. Black people in New Jersey are 2.8 times as likely as whites to be arrested for possession.

Only bestiality involving children is specifically prohibited in Vermont.

But while Vermont decriminalized possession of small amounts of marijuana in 2013, carrying an ounce or more is a misdemeanor punishable by six months in jail. Two ounces or more gets an unlucky toker up to two years locked away, while penalties steadily increase for larger amounts or sale and cultivation.

New Hampshire does not have laws specifically prohibiting bestiality.

But it does have laws punishing misdemeanor possession of any amount of marijuana with up to a year in jail and a $2,000 fine. The state Senate recently refused to consider marijuana reform, despite a supermajority of the House voting for decriminalization.

Aloha! Misdemeanor possession of less than an ounce of marijuana may net you 30 days in jail and a $1,000 fine, while greater amounts are punishable by up to a year in prison and a $2,000 fine. Sale or delivery of an ounce or more might land you in jail for five years and cost you $10,000. Paraphernalia laws are also unusually harsh — owning a bong with some marijuana resin in it could cost a Hawaiian five years in jail and $10,000.

Bestiality, on the other hand, is pretty much legal.

Only bestiality involving those aged 16 or under is a crime, meaning you can probably get away with human-sexual contact in the nation's capital. But the District of Columbia punishes possession of any amount of marijuana with up to six months in jail and a fine of $1,000, with other offenses carrying up to five years.

Congress is still debating D.C.'s recent decision to decriminalize possession of small amounts of marijuana, but seems very unlikely to intervene before the law goes into effect in mid-July.