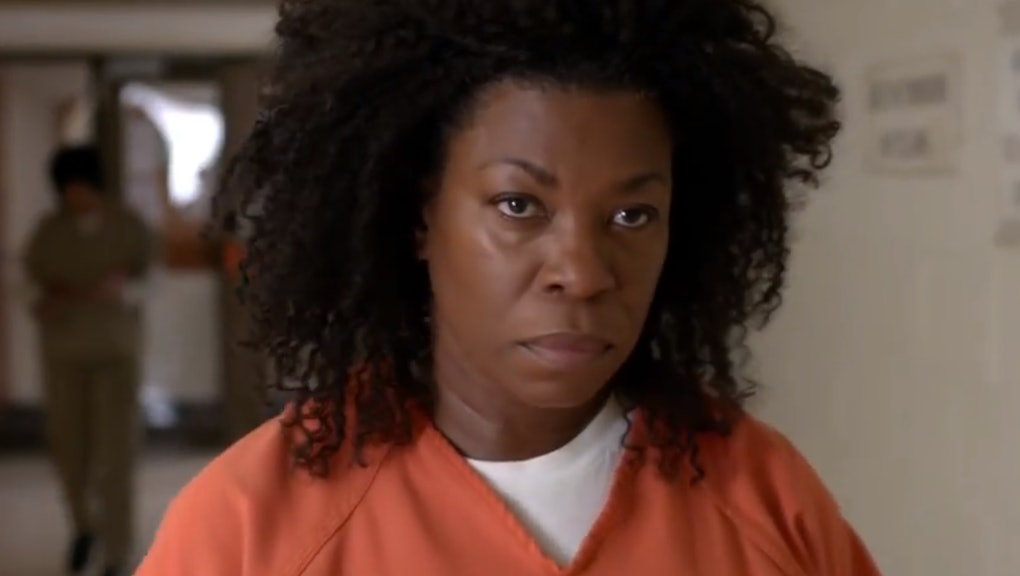 The buzz about season 2 of Orange Is the New Black has already hit a fever pitch. The female-powered cast, many of whom are relatively new faces on American television, creates a rich mosaic of diversity and represents a wide spectrum of gender, racial identity and sexuality.

Some critics panned the first season and the moments when female characters of color in the prison performed or reinforced stereotypes. But as the season developed, we learned that some characters appear to be stereotypes at first because they are introduced through Piper's perspective upon first arriving at Litchfield. Our preconceived notions of who these women are, and why they are in prison, gets shattered as the series progresses.

Over the course of season 2, Orange Is the New Black creator Jenji Kohan and her team of writers continue to peel away the layers and reveal a multicultural cast that is as hilarious as it is complicated. And when it comes to those dreaded stereotypes, the writers are much more explicit in their nudges to the audience that they, too, are in on the joke.

In no particular order, here are some of the ways the groundbreaking show has tackled thorney issues of race and gender in an innovative, counter-cultural way:

1. The tenderness of Maria's baby daddy

While most of the revelations and complexities in the characters surround the inmates and staff within the walls of the prison, one of the things season 2 did even more of than the first is mess with an American audience's tendency to judge a book by its cover.

Maria Ruiz, the inmate who gave birth in season 1, is seen over the course of season 2 meeting with her daughter's father in the visiting room. He doesn't utter a single word. He is stoic. He has neck and face tattoos. While she talks nervously and fawns over her infant daughter, he stares with empty eyes across the room, seemingly not listening or caring.

Then in the last episode of season 2, he's shown again talking baby talk with the little girl, smiling like a proud dad and kissing his daughter like so many doting dads do — yes, even those with neck tattoos. It's a moment likley to incite a double take from many of the show's viewers who had been quick to judge him as both a father and partner.

2. The multi-dimensional black female companionship of Poussey and Taystee

In season 2, the seemingly steadfast friendship and sisterhood between Taystee and Poussey struggle as the master manipulator Vee enters the world of Litchfield and forces a wedge between the two best friends.

One could make the case that Orange explores two black women and their interpersonal friendship in a way that's never been seen on television. Poussey's back story introduces us to her turbulent upbringing as a German-speaking lesbian Army brat who is routinely forced to move and start over in friendship and love. Her relationship with Taystee shows the duo as partners in crime who overprotective of each other, and sometimes things get explosive.

This dynamic shows that the bond between two black women can get just as complicated as any other friendship between two female friends of the same race. Here, finally, is a more realistic, and in many ways more empatheti, Friends coupling for the real world. Poussey's sexual orientation adds a further layer of complexity to the mix, but the relationship's universal characteristics have become a beloved aspects of the show, adding to its cross-cultural appeal.

3. The performative stereotyping of Black Cindy

In season 2, the writers are much more explicit in their attempts to tell the audience, that yes, some of the things these characters are a performance of are stereotypical behaviors. Black Cindy (Adrienne C. Moore) a mostly background character in the first season, represents much of the writers' winks to the audience that we are in on the joke.

One of the funniest scenes in season 2 is in episode 5 when Black Cindy plays instigator when two inmates are about to fight and she menacingly says, "Sock a nut bitch! Bam!" and then chuckles,  "I'm just playin'."

Black Cindy's back story reveals that she's a smart and outgoing average American woman working at the airport for the Transportation Safety Administration struggling with being a mother to her daughter. In this context, the posturing that for so many episodes has been a hallmark of Black Cindy's character falters for a second as viewers realize that the smack-talking caricature who stomps through Litchfield's halls is just that — a caricature.

Black Cindy, and the writers, are in on the joke, and it's a rewarding moment of recognition that while some stereotypes can be true, more often than not people are much more complicated than a few funny quips or our preconceived notions of who they are based on their appearance.

4. The equal-opportunity evil of Vee

Many women of color in Litchfield have a more grounded and cynical worldview based on their lived experiences with structural inequality and injustice. Black Cindy and Poussey, both smart, educated characters who portray the average American woman who took a wrong turn, sneer while watching a mock job fair in an early episode of season 2.

Tobacco giant Philip Morris is the only corporation willing to participate in the prison's mock job fair that was supposed to help the women learn to dress and act appropriately upon their release back into the real world. Poussey notes how pathetic it is that only the "evil" cigarette company would participate in the sham.

Vee, portrayed by Lorraine Toussaint, is the traditional villain archetype —manipulative, sociopathic and smug. This season's central conflict around Vee's illegal cigarette and drug smuggling upsets every dynamic in every clique at Litchfield.

The Daily Beast describes the new character's destructive entrance into the prison and Toussaint's skill as a character actor: "Toussaint is so menacing. She's like a cross between Lady Macbeth, Nurse Ratched, and Stringer Bell from The Wire; a calculating villainess whose perpetually calm demeanor will make the hair stand on the back of your neck."

In line with other epic TV villans, including Breaking Bad's Gustavo Fring, Vee is strictly business and plays the other women like pawns to make money and wield power.

"If you give people what they want, they will respect you," Vee said to her crew of black women as they prepped her contraband cigarettes for distribution.

Vee's manipulation of troubled, orphaned children in New York's inner city to fuel her drug operation isn't typical of any race or gender. What makes Vee so menacing is that she is driven by basic impulses that are universal and not easily dismissed as irrational. Vee can be any race or gender, which makes her both a breakthrough and someone transformational.

5. The steadfast commitment of Blanca.

In season 1, Blanca Flores is introduced as a ranting madwoman. She yells about "El Diablo" and continuously locks herself in the only working bathroom stall. It is an uncomfortable and bizarre scene that on it's surface plays into the notion of the hot-blooded Latina with a mane of unkempt hair and maybe even an obsession with the devil.

Later on, however, the character Blanca is revealed to have been hiding a cell phone in the bathroom stall so she could sneak romantic conversations and sexts to her boyfriend, whose name, not coincidentally, is Diablo. The character of Blanca changes when we realize that she was actually creating that image for herself as a ruse in order to communicate with her beloved. This character evolution, which serves to humanize Blanca, continues over the course of season 2 even while she's remains a background character. This shift challenges the viewer, who up until then had doubtless made several assumptions: Did we make those assumptions because she was a woman of color?

6. The jailhouse organizing of Brook

After one of the more uncomfortable scenes in season 1 when a representative from each racial group attends a meeting to raise their fellow prisoners' grievances to the administration, the black women ask for hot sauce.

In a cringeworthy manner, each bloc asks for ridiculous things, while Piper — the privileged white woman — asks for "substantive" things to improve living conditions. More often than not, Piper gets what she asks for and even some things she didn't request including a rare furlough period for her grandmother's funeral, causing prisoners from all racial backgrounds to steam about the system's favoritism toward white privilege, and affirming something Taystee had been saying all along — in Litchfeild, the game is always rigged.

7. The white privilege critiques of Poussey and Taystee

My favorite scene in Orange's first season is in episode 6, when the black women discuss politics — whether the Women's Advisory Council can actually make a difference. When Sophia, played by Laverne Cox, rants about demanding better health care and human rights, Poussey and Taystee, a much more cynical pair, have an epic exchange making fun of Sophia's naive "white people politics."

But they do so while putting on the devastatingly satirical voices and mannerisms of their invented, white privileged female characters, Mackenzie and Amanda:

This scene is one of the series' best because it demonstrates that marginalized people have to understand the nuances of every group, including the majority, while the white inmates in the scene fail to understand people of color.

8. The complicated marriage of Sophia

Sophia struggles with the consequences of her incarceration, which impacts her ability to access necessary health care and complicates the relationship with her ex-wife and son. This never-before-seen narrative is what makes Orange stand out from other female-centered dramas.

Just when the audience thinks they understand Sophia, they are challenged in their preconceptions when it's revealed that she was in a heterosexual marriage and has a layered, emotional and loving relationship with her wife, who is supportive of her transition, although hurt by the end of their marriage.

That loving relationship and desire to do what's best for each other and their son makes Sophia's struggling marriage a TV first, captivating because it's not only unique, but is also a circumstance so many people can relate to.

9. The humanity of the inmates in general

Arguably the most hilarious scene in season 1 is the Scared Straight re-enactment, when troubled youth visit the prison and the ladies of Litchfield perform "tough" to scare the kids back on the path of obeying the law.

Not only is Suzanne "Crazy Eyes" Warren in the scene "playing a role" and convincingly reciting Shakespeare, Poussey and Black Cindy are performing stereotypes of scary black women — but it's completely unconvincing to even the troubled young woman in a wheelchair.

Poussey says menacingly, "So what's up! You think you tough because you in a wheelchair and shit. Well, ain't no wheel chair ramps in prison right! Ain't nobody going to be holding no doors open for you and shit up in here!"

And when the young woman in the wheelchair is completely unconvinced by Poussey's fake thug routine, it's quickly revealed just how much of an act it was. The scene ends, dismantling a stereotype of felons as rugged, inflexible and brutal, when many of the prisoners are ordinary people and relatively non-threatening.

Whether portraying the way the inmates naively "study" for an anti-climactic "Job Fair," or illustrating their ultimately unsuccessful attempts to model streotypically scary behaviors, Orange's writers challenge Americans to revise their opinions about who ends up in prison by allowing us to get to know a diverse cast of characters, who as Poussey says in season 1 with her classic mixture of bitterness and heartbreaking sarcasm, "We all just made a wrong turn going to church."