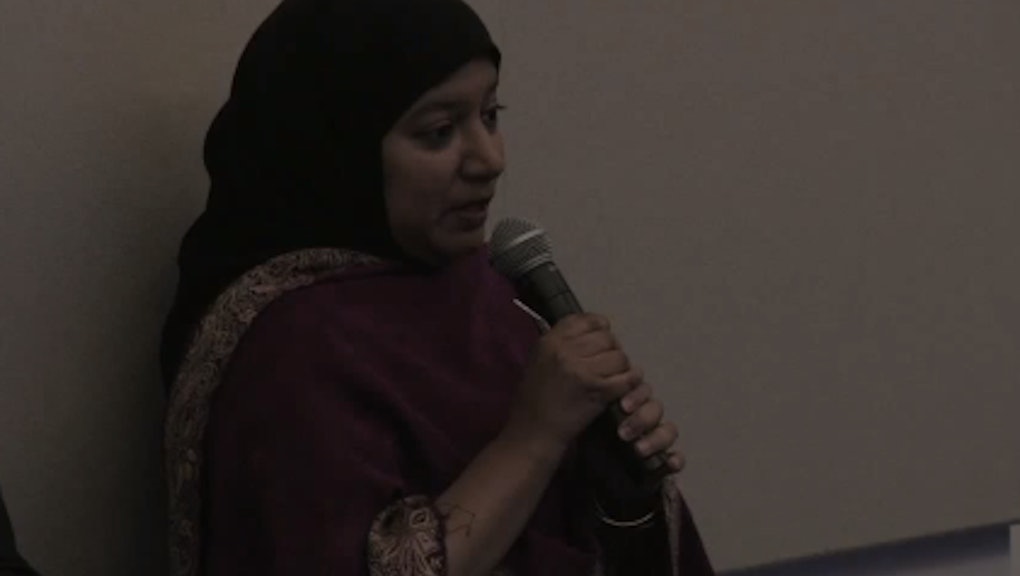 Watch What Happens When This Muslim-American Challenges a Conservative Panel

So is this what American discourse has become?

A Heritage Foundation panel about the September 2012 attacks on U.S. diplomatic facilities in Benghazi, Libya, quickly turned sour after a veil-wearing Muslim law student dared to ask a question.

A conservative think tank based in Washington, D.C., the Heritage Foundation believes the "principles and ideas of the American Founding are worth conserving and renewing." But what exactly those principles are was called into stark relief this week following the despicable way panelists treated the young woman.

"The session, as usual, quickly moved beyond the specifics of the assaults that left four Americans dead to accusations about the Muslim Brotherhood infiltrating the Obama administration, President Obama funding jihadists in their quest to destroy the United States, Obama and Hillary Rodham Clinton attempting to impose Sharia blasphemy laws on Americans and Al Jazeera America being an organ of 'enemy propaganda,'" Dana Milbank summarized for the Washington Post.

The anti-Islamic rhetoric began to really ramp up, however, after a polite woman in the audience named Saba Ahmed raised her hand and quietly asked a simple question. "We portray Islam and all Muslims as bad," Ahmed told the panel. "But there's 1.8 billion followers of Islam." She added that there are 8 million-plus Muslim Americans in the U.S., "and I don't see them represented here."

Panelist Frank Gaffney, president of the conservative think tank The Center for Security Policy and "the anti-Muslim movement's most paranoid propagandist," was the first to respond. Conceding that not all Muslims present a problem, he then attacked Ahmed's question about tackling jihadist ideology with military warfare, dismissing her use of the word "ideology" and calling Sharia law a doctrine, program or agenda. Gaffney also admitted that there are good Muslims — the ones who don't speak Arabic and aren't imbued with the Saudi Arabian branch of Islam — but criticized the Muslims beyond "the fault line" who want to impose God's will on everyone else.

But it was panelist Brigitte Gabriel, an anti-Islam activist known for calling Arabs "barbarians" and whom the New York Times has described as "one of the most visible personalities on a circuit of self-appointed terrorism detectors," who really turned things nasty.

Despite the bigoted makeup of the panel, Gabriel insisted that the event was about the four Americans who died in Benghazi; "We are not here to talk about Muslims, you were the one who brought up 'most Muslims,'" she told Ahmed.

Gabriel went on to say that although the vast majority (75%,"according to all intelligence services around the world") of Muslims are peaceful, there are still 180 million to 300 million Muslims "dedicated to the destruction of Western civilization." The point of no return came when Gabriel compared Muslims to Nazis, saying, "Most Germans were peaceful — yet the Nazis drove the agenda... the peaceful majority were irrelevant."

When Gabriel asked Ahmed where the other Muslims speaking out are, she was drowned out by whoops, cheers and a standing ovation from the audience.

Gabriel continued her rant by questioning Ahmed's status as an American citizen, accusing her of taking "the limelight" as "the only Muslim in here," and criticizing her for making a point about "peaceful Muslims" — Gabriel said those words while making air quotations with her fingers — instead of focusing her concerns on the deaths of four Americans in Benghazi.

Over at Crooks and Liars, John Amato charged the panel members with suggesting that "their religion is the one true religion ... and their beliefs outweigh your constitutional rights." He pointed out the irony of Christian conservatives who "whine about how their religious freedoms are being trampled on by the federal government" and then make comments like those made at the Heritage Foundation panel.

Now, the Heritage Foundation does not exactly have a reputation for cool and collected debate. These are the same people who held a held a panel for Women’s History Month and concluded that feminism has actively hurt women, after all. POLITICO's Dylan Byers has argued that the hostility of the exchange has been "grossly misrepresented," but while most of the panelists did not lose their cool they way Brigitte Gabriel did, their Islamaphobia was nevertheless apparent. The idea that "the peaceful majority" of Muslims is irrelevant is inherently problematic.

"Can you tell me who the head of the Muslim peace movement is?" the panel's moderator, right-wing radio host Chris Plante, asked Ahmed. "I guess it's me right now," she replied. "As a peaceful Muslim American I'd like to think that I'm not that irrelevant."