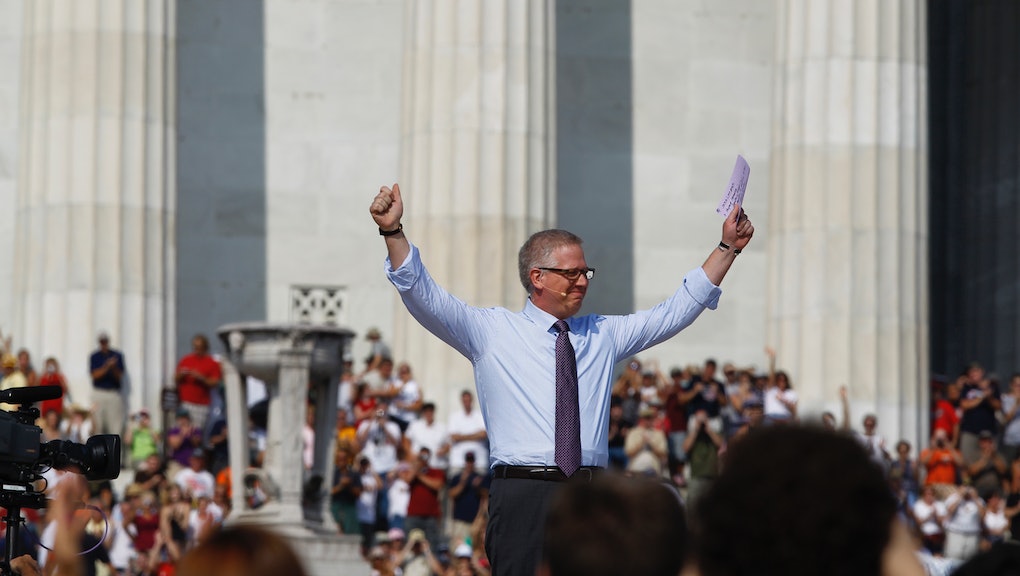 The news: A decade after the U.S. invaded Iraq, toppled its astonishingly vicious Baath dictatorship and unleashed a toxic brew of occupation and insurgency, bombs are still going off and people are dying en masse across huge swathes of the country.

In short, the fallout of the 2003 American invasion is still being felt on a daily basis by virtually every Iraqi.

But over here in comparatively placid America, pundits have the luxury of introspection and reconsideration now that our troops aren't in the way. Case in point: Glenn Beck has supposedly astounded conventional political wisdom by claiming he'd reached the conclusion anti-war liberals were right on the Iraq War after all.

From the beginning, most people on the left were against going into Iraq. I wasn't. At the time I believed that the United States was under threat from Saddam Hussein. I really truly believed that Saddam Hussein was funding terrorists. We knew that. He was funding the terrorists in Hamas. We knew that he was giving money. We could track that. We knew he hated us. We knew that without a shadow of a doubt. It wasn't much or a stretch to believe that he would fund a terror strike against us, especially since he would say that. So I took him at his word.Now, in spite of the things I felt at the time when we went into war, liberals said: We shouldn't get involved. We shouldn't nation-build. And there was no indication the people of Iraq had the will to be free. I thought that was insulting at the time. Everybody wants to be free. They said we couldn't force freedom on people. Let me lead with my mistakes. You are right. Liberals, you were right. We shouldn't have.

Death and Taxes' Robyn Pennacchia sums up how confused some liberals must feel now: "I guess that's nice? I don't know. It's like, Glenn Beck agreeing with me is even scarier than Glenn Beck not agreeing with me. Especially when Glenn Beck clearly has no understanding of why progressives opposed the war in Iraq in the first place."

What are these "mistakes" Beck is admitting to? Oh, I don't know. Maybe sponsoring "patriotic" pro-war rallies in 2003, saying the occupation was going just dandy throughout all of 2004, celebrating the "positive side" of the war, claiming entering Iraq was necessary to prevent a world war with Iran, telling us in 2007 that a troop withdrawal would be "America's most shameful act of immorality since slavery," saying victory was still possible if we just doubled down in 2008, getting really angry when Obama "refused to declare victory" in 2012 and even selling a "Best Of" album commemorating his first year of Iraq War punditry.

In short, Beck is a person who didn't merely help provide the ideological backing for the Iraq War. He actively profiteered from it. He also kept insisting that it was going just fine right as many others were realizing the invasion was a terrible mistake that landed the U.S. in a bloody, internecine conflict it had little right to help trigger.

To be fair to Beck, he's been undergoing an ideological transformation from far-right social conservatism to libertarianism over the past few years. So just like Iraq in the post-Saddam era, there's bound to be a couple bumps along the way, right?

Why you should care: It's great that the people who irresponsibly cheerleaded the U.S. military into Baghdad are now realizing that it maybe wasn't the best idea. But it would be hypocritical and shallow to pat them on the back for it, given that their unforgiveable warmongering helped form the justification for an imperial project that cost almost half a million lives.

This isn't about gloating. It's about the very real danger that comes with letting the architects of the Iraq War continue to play an outsized role in the future of American foreign policy. For some reason people like Dick Cheney are still considered experts worthy of being listened to. So is Thomas Friedman, who famously told Iraqis to "suck on this."

Glenn Beck and other Iraq War hawks (which included many prominent American liberals, and yes, Hillary Clinton) made their decision when it counted. It's just no longer fashionable to be so outrageously wrong. Say what you want about Kissinger, but at least he didn't try to weasel out of it afterwards.