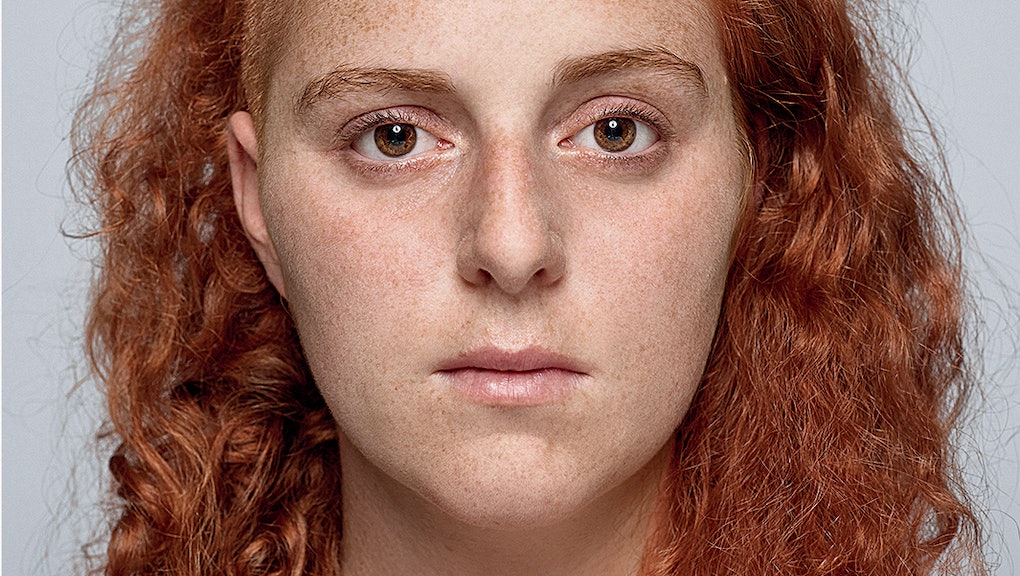 Redheads of the world, unite! You have nothing to lose but your place in the gene pool.

Director Ole Schou says demand wasn't high enough and with an overflowing semen capacity of 70 liters(!), it wasn't worth the investment anymore. But with distribution in 65 countries, Cryos' big decision feeds into some fatalistic questions around this rare phenotype's future.

Case in point is National Geographic's claim that redheads – who make up less than 2% of the global population – will disappear in 100 years. This has since been debunked, yet statements like this still fuel the stereotypes, misconceptions and general disrespect faced by redheads worldwide.

But take heart, friends: There are those who would not sit by while this damning narrative persists.

The Cryos news inspired Italian artist Marina Rosso to create "The Beautiful Gene," a photo series – supported by Fabrica, who published the work – addressing the moral questions around sperm commercialization and its role in human evolution.

In doing so, she effectively drops the gauntlet against such attempts to narrow genetic diversity. Her subjects' message seems equally clear:

In the immortal words of Sisqo, "Can I live?"

Nice: Their expressions are defiant, but also accusatory toward tendencies to dismiss their value and beauty, both by sperm shoppers and on a broader scale.

The irony, as BuzzFeed kindly reminds us, is that being a redhead holds valuable evolutionary benefits (hi, potential parents). For instance, there's a reason the colder, foggier reaches of the northern hemisphere boast a relative surplus:

The pheomelanin that produces their unique hair color and fair skin also produces more Vitamin D, meaning they need significantly less sunlight than most. More than that, their appearance stems from a recessive gene present in enough of the general population to survive for generations.

But: In the end, Rosso's photos mainly remind us that engineering people's looks eliminates countless possibilities. Narrowing standards of desirability play a role, yet as anyone who's seen Gattaca can attest, a world that fails to celebrate every individual's uniqueness can be pretty myopic concerning human potential, not to mention boring.