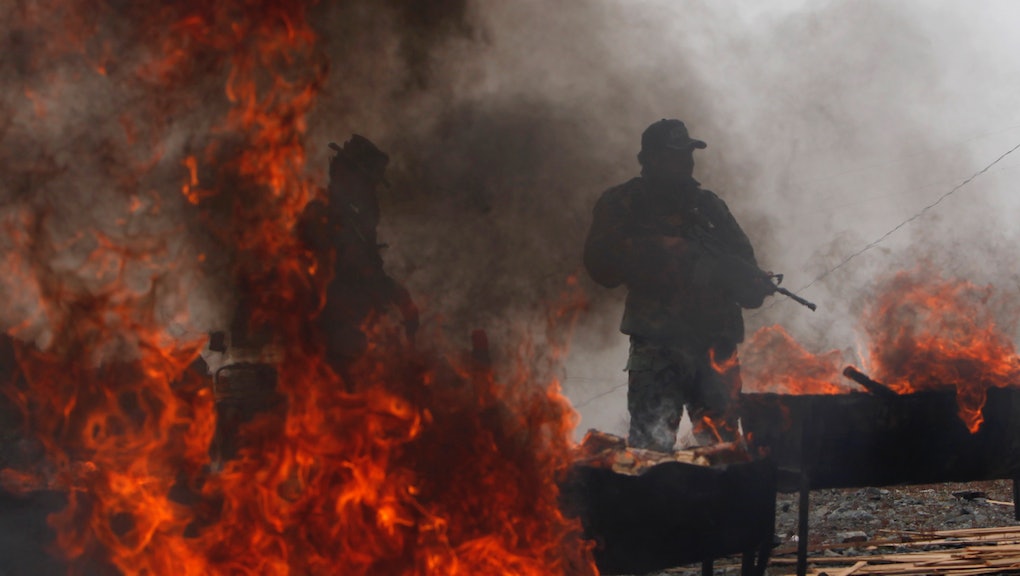 The news: The 21st century might be the most civilized age in human history, but the past seven years have taken a great toll on global peace.

On Wednesday, Australia's Institute for Economics and Peace (IEP) released its annual Global Peace Index and its findings do not reflect well on international security and stability. According to the IEP, 111 countries have deteriorated in peace levels since 2008, while only 51 countries have improved — representing the lowest levels in the past 60 years. The IEP attributed the decline over the past year to "a rise in terrorist activity, the number of conflicts fought and the number of refugees and displaced people."

"Given the deteriorating global situation we cannot be complacent about the institutional bedrocks for peace: our research shows that peace is unlikely to flourish without deep foundations," said IEP founder Steve Killelea in a statement. "This is a wakeup call to governments, development agencies, investors and the wider international community that building peace is the prerequisite for economic and social development."

Here is a map overview with the complete country rankings (click the link below to see a bigger version):

The findings: While Europe remained the most peaceful region of the world — 14 of the top 20 countries were from the continent — of the 25 countries that ranked low on the Global Peace Index, 17 were from Africa and the Middle East.

South Sudan fell the most in the rankings, while instability in Egypt and Ukraine contributed to their lower rankings as well.

The concentration of violence means that around 560 million people live in just 11 of the least peaceful countries in the world. Around 200 million people from these countries are estimated to live below the poverty line.

The study looked at 22 indicators across 162 countries, including military spending, homicide rates and deaths from conflict, civil disobedience and terrorism. Heavy military expenditure contributed the most to the global cost of violence, which the IEP estimated to be at $9.8 trillion last year — that's about 11.3% of the GDP of the entire world and twice the GDP of the entire African continent.

Europe was the only region of the world that had a decline in weapons imports, while conflict in Russia and Ukraine led to a 136% increase in Eurasia.

If you're wondering about the U.S., the country came at a measly 101st place, below countries such as Cuba (75) and Liberia (84). The IEP attributed the fall to rise in mass shootings and terrorist activity, such as the Boston marathon bombing.

What does this mean? As any subjective ranking goes, the Global Peace Index is not a definitive measure of international security. Still, it's a helpful snapshot of conflicts brewing around the world, from the civil war in South Sudan to religious violence in the Central African Republic and the disturbing rise of the Islamic State in Iraq and the Levant (ISIL).

And while the international community may not be embroiled in a so-called "world war," that doesn't change the fact that there are deep conflicts brewing in pockets of the world. As the IEP report shows, global peace remains fragile and tenuous.