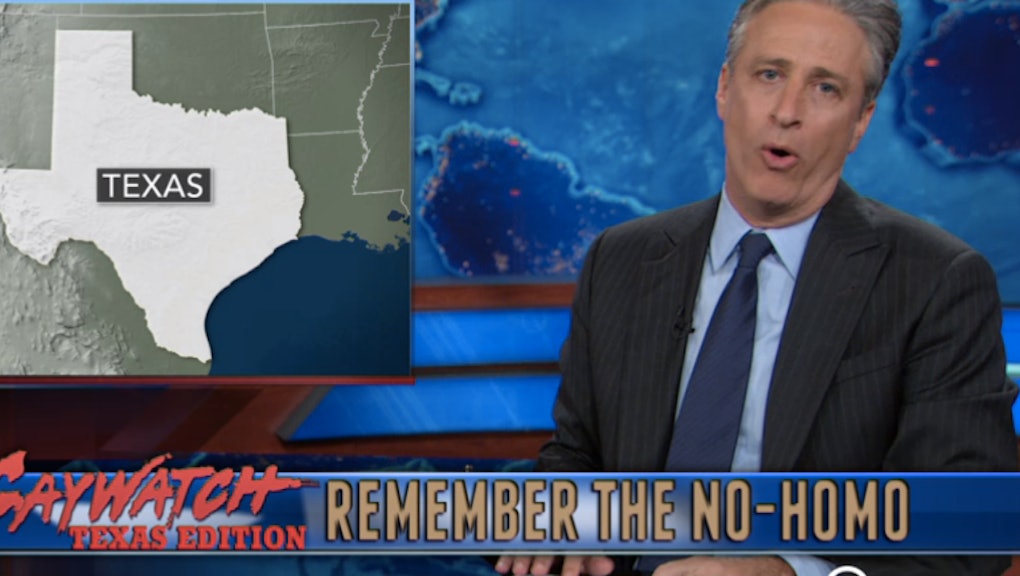 The "gay agenda" is about equality for all LGBT Americans — not a scary, sinister plot. But that's what Texas Gov. Rick Perry and his fellow cohorts in the state GOP would rather have you think, given how they just crafted their new party platform.

Stewart's efforts are aimed predominantly at Texas politicians' efforts to undermine gay rights, efforts thrown into sharp relief by a particularly controversial measure recently added to their slate of party positions: reparative therapy (otherwise known as conversion therapy) for gays and lesbians who seek to escape the "homosexual lifestyle."

“Whether or not you feel compelled to follow a particular lifestyle or not, you have the ability to decide not to do that.... I may have the genetic coding that I’m inclined to be an alcoholic, but I have the desire not to do that, and I look at the homosexual issue the same way.”

Although New Jersey Gov. Chris Christie took exception to the comparison, perhaps one of the most spot-on critiques of the proposed platform came from Stewart earlier this week in a Daily Show segment:

Perhaps Stewart's most insightful critique of the GOP platform is the hypocritical use of "choice." It seems that, for Perry and the Texas GOP, "choice" exists only when they are doing the choosing.

A growing number of medical institutions and even state legislatures have disavowed reparative therapy, which is often marketed as some kind of Dr. Oz "miracle" for changing one's homosexuality.

But, more often than not, anti-gay media figures throw around the phrase "homosexual lifestyle" as a way to undermine queer identities. The reality is that a lifestyle is nothing other than the deliberate ways and ethics by which each person lives their life. In many cases, gays and lesbians have reacted to the avowed homophobic rhetoric of those like Perry and his colleagues by disavowing the word altogether, in an effort to end debate over whether it's a "choice" or something you're born with.

Indeed, the legal arguments for gay rights have now become mainly centered in biology, rather than ethics. That's problematic, especially for people who do not believe that our individual choices are determined by our genetic makeup, a concept known as biological determinism. In the face of unified opposition, LGBT advocates need to be equally unified — attempting to force a diverse community to identify using the same language isn't the answer. Of course, Stewart's razor-tipped barbs certainly don't hurt the cause, either.

Not surprisingly, Perry's long been in the business of making headlines with overtly homophobic behavior. During his failed 2012 presidential campaign, his "Stronger" ad attracted widespread criticism and parodies for suggesting increased gay rights comes at the expense of religious freedoms for Evangelical Christians. Perry was also one of the most vocal critics of the Boy Scouts of America lifting its ban on gay members.

As the Southern saying goes, this man could start an argument in an empty house. But maybe he should try thinking before he talks instead.