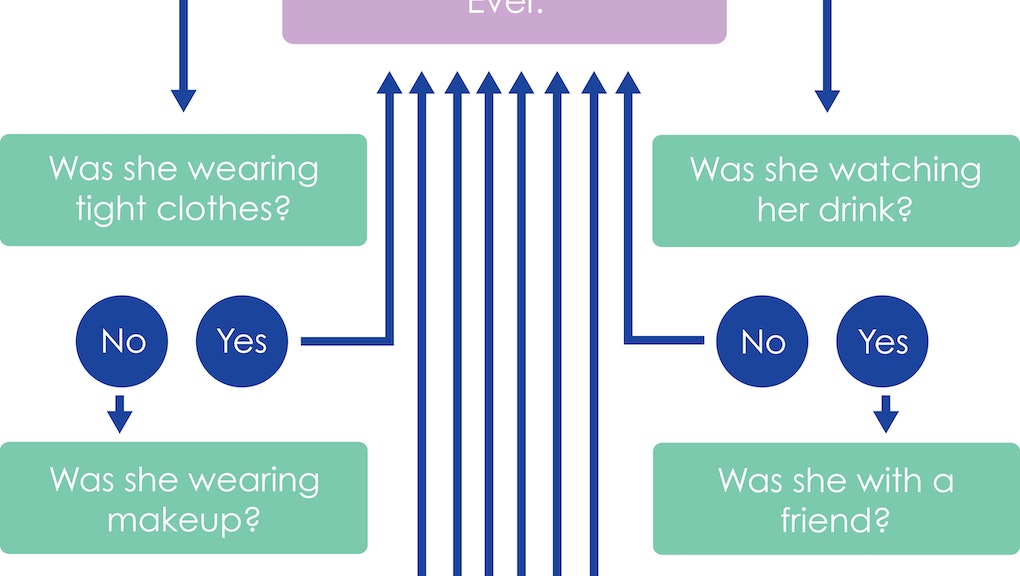 When Is a Woman to Blame for Rape? Check This Chart

Why is that whenever a woman is raped, we lead with the follow-up questions? What were you wearing? What were you doing? Where were you going? Why were you at his house?

This instinct — to hold women responsible for the crimes perpetuated against them — remains prevalent in American society, despite the tireless efforts of advocates. Like many other crimes against women, we can't seem to rid ourselves of the stereotype that women, as lesser and second-class citizens, can't be entirely innocent.

Every two minutes a woman is sexually assaulted in the United States. Rape is one of the most heinous crimes in the world, and yet, unlike any other victims, victims of sexual assault are often asked about their involvement in the crime, as if they were complicit in it.

Victim-blaming isn't just what a vocal minority does, it's woven into our political and judicial system. Pundits, public officials, police officers and judges have often blamed female survivors of rape. Just last year, a girl in Maryville, Mo., was left to freeze on her door step and was allegedly sexually assaulted by football players only to be subjected to a "legal expert" on Fox News who suggested she was lying. "What did she expect to happen at 1 a.m?" the so-called expert asked. Similarly, a judge gave a measly 45-day sentence to a teacher because the student he raped supoosedly wasn't the victim she claimed to be, because she had three sexual partners and had a baby. Even cops, whose job it is to serve and protect, have long been prejudiced against rape victims. Whether it's the NYPD alerting women to the importance of not wearing shorts to avoid rape, or a Toronto officer who told a room full of law school students to avoid rape by not "dressing like sluts," it's hard to feel like we can solve the epidemic of sexual abuse if law enforcement isn't on our side.

So what do we do about it? This chart may help. Whenever you hear someone asking these questions, assist them with this helpful infograph. It has all the answers that they need.