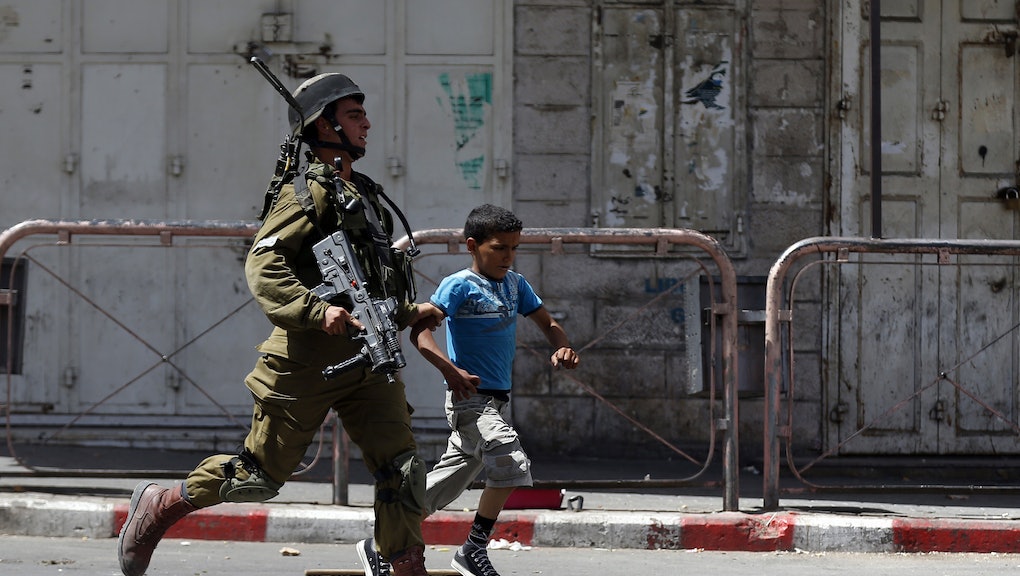 It was Thursday night when Gilad Shaer, Naftali Frenkel and Eyal Ifrach disappeared. The three Israeli teenagers were hitchhiking home from their schools in the West Bank, and were last seen near Gush Etzion, a settlement bloc. They never made it home.

Seven days have now passed since the disappearance, and in that time Palestinian life has been plunged into fear and disarray. In what is now clearly much more than a bid to return missing teenagers, Israeli forces have unleashed a military crackdown on the West Bank — a crackdown that, for all its punitive brutality, is yet to attract real scrutiny from the global media.

In Israeli media it was presumed that the young settlers had been abducted, and officials pinned the blame on Hamas. The militant organization denied any involvement, but the incident was soon being reported globally as a Hamas terror attack, with international condemnation and coverage of the kidnapping featuring on U.S. news. By the end of the weekend, the flurry of attention on the abduction was reaching its peak.

For Palestinians, however, the crackdown had just begun. On Sunday night, the West Bank city of Hebron was shut down as troops began to search from house to house. Couples were woken at gunpoint in the dark, groceries scattered across kitchens, men blindfolded and cuffed in their living rooms. Doors were blasted open, and an 8-year-old was seriously injured by shrapnel. In the Jalazon refugee camp, 20-year-old Ahmad Sabarin took a bullet to the chest; he died in hospital.

That first night, 140 people were arrested, supposedly "terror suspects" associated with the kidnapping. But neither this, nor the disproportional military siege unfolding in the West Bank, made the global headlines: For editors in the U.S., it seemed a sidenote compared to the disappearance of the three settlers.

In just the past few hours, a 14-year-old boy, Mahmoud Dudeen, and 22-year-old Mustafa Aslan were both shot dead by Israeli forces. Now, nights from Bethlehem to Jenin are disturbed by blasts as soldiers patrol the streets and storm houses, dispersing stone-throwing youth with live fire and sound grenades. Airstrikes are in full force over Gaza, and on June 18, Palestine's top university was raided. Both Palestinians and Israelis say this is the biggest West Bank mobilization since the second Intifada.

"We are seeing a total shutdown of what was an already desperate situation," Mahmoud Subuh, from the Balata refugee camp in Nablus, told Mic. "Wednesday night, 20 to 30 houses were raided here. The whole third floor of one house was destroyed. The crackdown is really serious, and everyone is confused and hopeless. No one wants this violence again."

Image Credit: AP. A woman cleans her house in Balata refugee camp after it was raided by Israeli soldiers.

Is this desperation a news story? It doesn't seem so. In the U.S. media, coverage has been sparse — eyebrow-raising, given the level of violence. And while the strongest international condemnation has zeroed in on the kidnapping, no esteemed voices have criticized the deaths of Ahmad Sabareen, Mustafa Aslan, Mahmoud Dudeen or Ali al-Awoor, a 7-year-old boy also killed by Israeli fire this week.

This pattern is familiar. When Eyad, Gilad and Naftali disappeared, some 130 prisoners in Israeli jails were on the brink of death after more than fifty days on hunger strike against administrative detention, a practice that means they are imprisoned without charge, sometimes for years. The youngest striker, at 19, is the same age as one of the kidnapped boys. Yet his plight — and that of the 196 Palestinian minors imprisoned, often for stone-throwing, in Israeli jails — has gone largely unnoticed by the wider world.

The enormous wave of arrests that followed the kidnapping, too, has itself escaped serious censure. Since the boys' disappearance on Thursday, at least 300 Palestinians have been arrested. None have been charged (many will be put in administrative detention) and the majority are members of Hamas.

Image Credit: AP. A member of Hamas is arrested by Palestinian police officers in Hebron.

Superficially, Hamas is targeted because it is deemed responsible for the kidnapping. But as the days pass and incursions intensify, the crackdown is eclipsing the search for the boys — teenagers whose safe return should surely be paramount. The fact that the operation now reaches far beyond the kidnapping is hardly a secret strategy: Israel's intention to "perform a root canal to uproot everything green [Hamas-related] in the West Bank" was announced on Army Radio, while Economy Minister Naftali Bennett promised promised to "turn membership of Hamas into an entry ticket to Hell." In one Israeli news source, an IDF officer even admitted that the operation had been planned ahead of time, and that its goal was not to find the boys, but provoke unrest.

Image Credit: AP. Israeli soldiers in Hebron during a search for the missing teenagers.

This calculated decimation — and the brutal specter it's casting over the lives of Palestinians across the West Bank — hasn't been truly grasped by U.S. media. That's especially unfortunate, because the consequences of it could mean a great deal. Only two weeks ago, a unity government was being announced between Hamas and the more moderate Fatah party. Elections were scheduled, and although many were skeptical, the move was a glimmer of hope after years of gridlock on the road to statehood. Now, the kidnapping and its fallout mean that any slim hopes for a democratic unity government look futile.

When reconciliation took place, Israel was uncompromisingly damning of what it said was a deal with terrorists committed to its destruction. But if it's made it a mission to destroy Hamas in the West Bank, normal Palestinians will be paying the price with restrictions, violence and fear.

Image Credit: AP. Relatives of Sabarin crying before his funeral in Jalazoun.

Sadly, none of that is very media-friendly. We all hope that Gilad, Naftali and Eyal are returned safely to their families. But we must not forget about the stories we don't talk about, of the hundreds of boys held in Israeli jails, the thousands killed and the hundreds of thousands trapped by the intolerable conditions of occupation.

As families in the West Bank anticipate another night of unrest, it's not just soldiers that will be keeping them awake.

"We are terrified and tense, but also hopeless and disappointed," Issa Amro, a human rights activist from Hebron told Mic.

"Around the world, the media report only the three missing Israelis, but not 800,000 Palestinians living under occupation in Hebron. The Israeli strategy is not to find the boys, but to punish Palestinians. They are destroying our dream of creating our own state, and our dream of living in freedom."