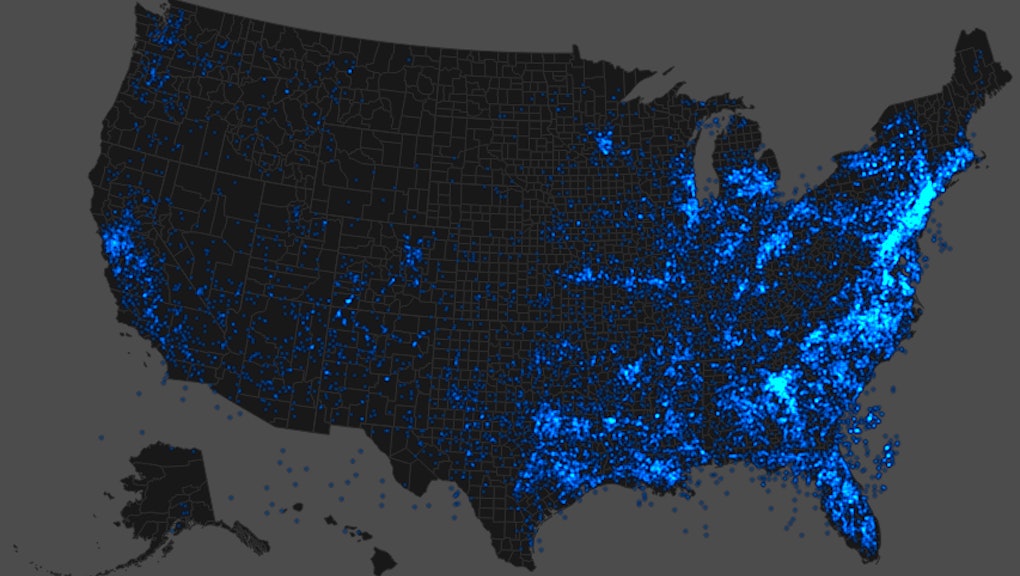 The Financial Crisis Hurt America, But One Group Has Had It Worse For a Long Time

The map above animates black migration patterns around the U.S. and the constellation of bright spots is almost miraculous. Moving dots converge toward cities like Atlanta, Dallas and LA, economic hubs attracting African-American migrants in search of opportunity. The map provides a strong visual sense for the entrepreneurial spirit and optimism in the African-American community.

But the broader story of African-American economic conditions is not about opportunity. It's about the many more unseen dots on the map, the African-Americans with zero bright prospects due to high unemployment, high poverty and low economic mobility.

The economic crisis took a toll on African-Americans that few recognize. For simple comparison, the national unemployment rate during the Great Recession peaked at 10%. For black America? 16.9%.

Still more staggering, the worst of what most Americans experienced during the past recession doesn't even compare to the economic hardship that African-Americans have endured for decades.

Take a look at the chart below.

Black unemployment is also shockingly high by international standards, as shown in this next chart.

This isn't to say that all African-Americans should move to the Kyrgyz Republic or Mali.

Rather, the chart underscores the stark failure of the American job market. Well-functioning job markets match job-seekers to jobs. The international comparison combined with the previous chart suggest African-Americans are broadly excluded from the U.S. job market.

Job-market exclusion takes a human toll in the form of depressingly high poverty rates. The poverty rate for blacks is 3x higher than it is for whites, a difference that jumps out on the next graph.

Along with unemployment and poverty, the other dimension of black economic hardship that's important to understand is low economic mobility.

In a landmark study, economists at Harvard and UC Berkeley examined the incomes of 40 million people and their parents over 30 years to analyze how economic mobility relates to demography and geography. One of their most striking results appears in the map below, via the New York Times.

Income Mobility in the United States, by County

Here is a map of the black population distribution. You should notice a pattern.

Map by US Census Bureau.

Areas with large black populations are the least mobile. You can see concentrations of African-Americans and low economic mobility in the South and mid-Atlantic.

This is where many of the unseen dots on the migration map are located.

The tragic combination of high unemployment, high poverty and low economic mobility means millions of African-Americans have almost no chance to improve their circumstances and rise into the middle-class.

The United States is a country founded on principles of equality and for that reason alone black economic hardship, and more generally racial inequality, should be of grave concern to every American. But racial inequality also takes a material toll on the country that is crucial to recognize.

It turns out that racial inequality lowers U.S. GDP by $1.9 trillion per year, according to a 2013 report by the Altarum Institute and the W.K. Kellogg Foundation. By comparison, the Great Recession cost U.S. GDP $300 billion. The report's author adds that the $1.9 trillion "would translate into $180 billion in additional corporate profits, $290 billion in additional federal tax revenues, and a potential reduction in the federal deficit of $350 billion, or 2.3% of GDP."