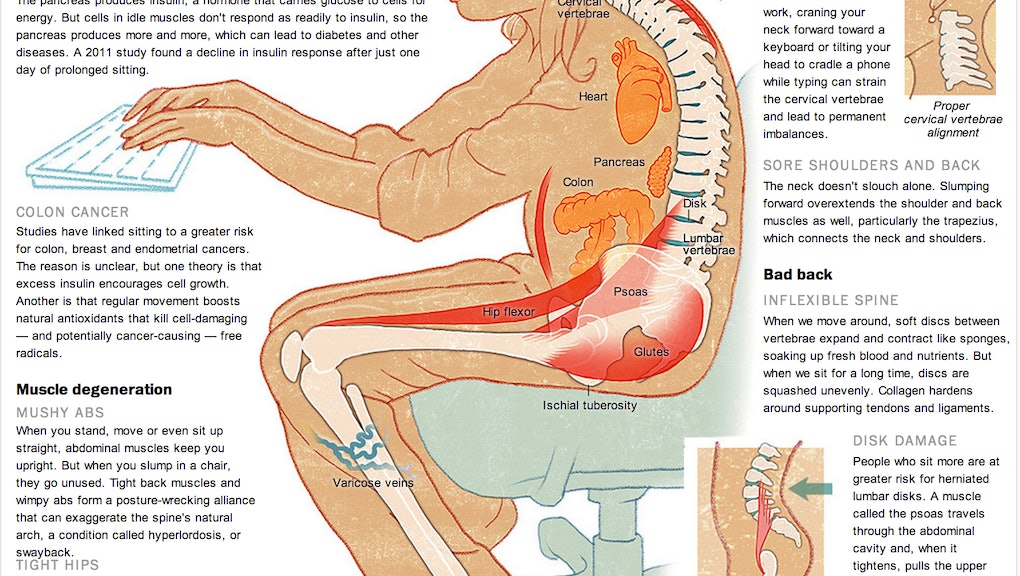 TIME reported last week that too much sitting increases the risk of cancer by up to 66%.

USA Today ran with a story that said sitting was linked to breast cancer, claiming this headline:

The news is going viral.

But there's a problem: What many of the outlets did not report was that sitting for long periods did not explicitly cause cancer: It led to an increased risk of two specific types of the disease. These two types also happen to be linked to being overweight and obese, behaviors that are associated with sedentary behavior.

Here's what the researchers actually found: After reviewing 43 studies, the researchers, who published their study in the Journal of the National Cancer Institute, discovered that people who sat for long periods of time had a higher chance of developing colon and endometrial cancer. The more time they spent on their butts, the more their risk increased.

In fact, for every additional two hours someone spent sitting, the researchers reported an 8% increase in their risk for developing colon cancer and a 10% increased risk for endometrial cancer.

So what is risk, anyway, and why does it matter? The 66% increase that TIME boasted in its headline sounds huge.

What that figure doesn't include is the overall risk of developing the two types of cancer that the study found to be associated with more sitting time. For example, this table shows the percentage of American men who developed colon cancer over 10-, 20- and 30-year periods according to their age between 2008 and 2010.

If you're a 30-year-old man, your risk of developing colon cancer by the time you turn 60 is just under 1%.

According to the study, every two-hour increase in sitting time led to an 8% increase in the risk for developing colon cancer.

So, theoretically, if you're a man that spends eight hours sitting at the office each day and you were to start sitting for only six of them, you could decrease your colon cancer risk by about .08%.

As for the allegation that sitting causes breast cancer? That's a conclusion the researchers who did the study explicitly did not find.

We know sitting is bad for us. Too much sedentary time can have dozens of unintended long-term consequences, from higher rates of chronic diseases, including heart disease and diabetes, to immediate effects such as strained and sore muscles.

Bonnie Berkowitz and Patterson Clark made an awesome infographic of all the health problems someone can develop just by spending too much time in a chair.

Luckily, there are tons of ways to cut back on your chair time. At work, you can take breaks every couple of hours — walk down the block or around the office. And instead of hunching over your desk for lunch, step outside and get some air.