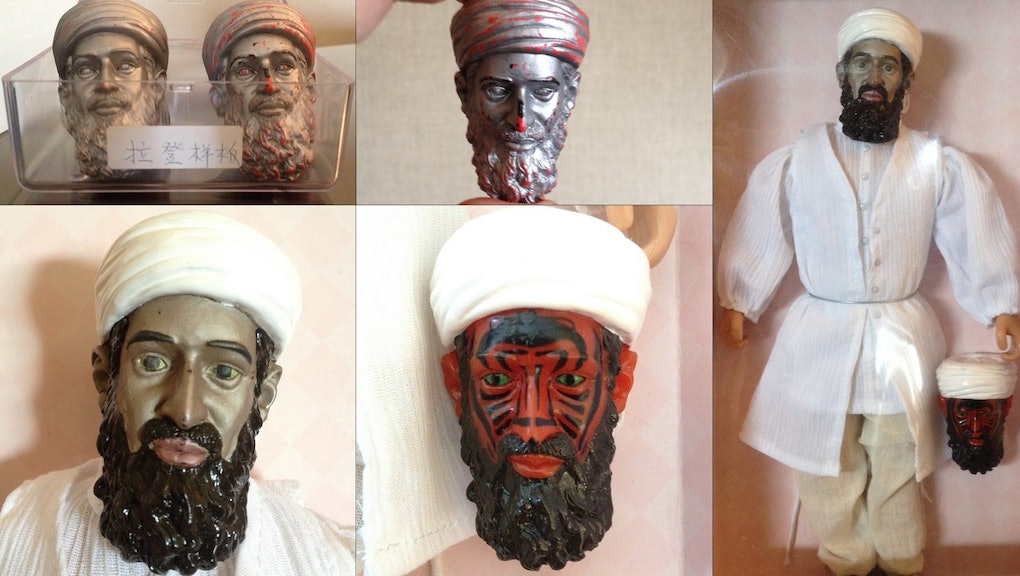 The news: Under U.S. policy, "winning hearts and minds" has become a big part of foreign interventions — and for the CIA, that apparently means scaring children from joining al-Qaida.

According to a new report by the Washington Post, during the early years of the United States' involvement in Iraq and Afghanistan, the CIA developed a scary, 12-inch Osama bin Laden doll to turn Pakistani children and their parents from supporting al-Qaida. The project, code named "Devil Eyes," included the involvement of former Hasbro executive and G.I. Joe creator Donald Levine. The toys never made it out of development stage, but some prototypes have survived to this day.

The dolls' faces were painted with a heat-dissolving material that eventually peeled off to reveal a demon version of bin Laden.

And it bore a striking resemblance to a certain Star Wars villain:

What happened to the dolls? Initially, they were part of the CIA's efforts to win over children by displaying America's generosity. These "influence operations" involved giving out backpacks filled with toys and school supplies in Afghanistan and the surrounding areas.

Eventually, the CIA decided that if it was going to give out toys, it might as well use the opportunity to hurt bin Laden's image. The toys were developed and manufactured under Levine's supervision in China, although the project was scrapped for an unknown reason.

In a statement to the Post, the agency admitted that the dolls were developed, but said that they were abandoned pretty quickly. "After being presented with these examples, the CIA declined to pursue this idea and did not produce or distribute any of these action figures. Furthermore, [the] CIA has no knowledge of these action figures being produced or distributed by others," said CIA spokesman Ryan Trapani.

There's no knowing whether Pakistani children would have ended up more scared of bin Laden or of Americans' ability to create demon dolls, but it's safe to say that this is one doll that won't end up on most kids' wish lists.