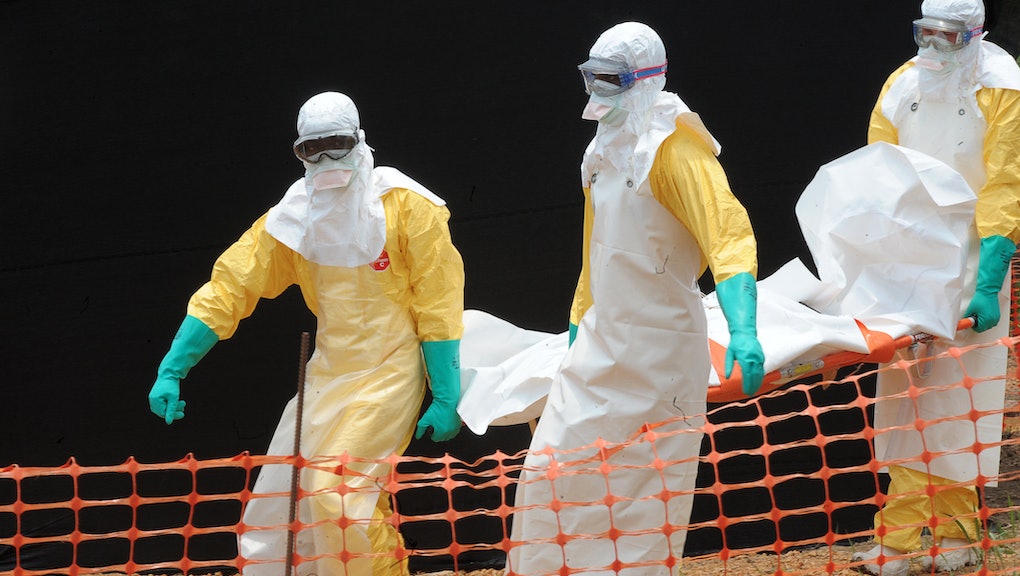 The news: It's Ebola.

The largest outbreak ever of the hemorrhagic fever is spreading "totally out of control" in West Africa, according to a senior official with Doctors Without Borders. The World Health Organization reports that some 330 deaths are now considered linked to the deadly virus in Guinea, Sierra Leone and Liberia.

"The reality is clear that the epidemic is now in a second wave," Doctors Without Borders operations director Bart Janssens told the AP. "And, for me, it is totally out of control."

German specialists previously said that the epidemic killing people across West Africa was caused by a new strain of the Zaire ebola virus, which killed 88% of its victims in the first known outbreak in 1976. Doctors have managed to keep the fatality rate lower than previous epidemics, but the current outbreak is killing approximately 64% of its victims.

What's Ebola? Ebola virus disease is a stunningly lethal infection caused by one of five different species of African viruses. It looks something like this little guy here.

Humans are originally infected by coming into contact with the blood or bodily fluids of an infected animal ranging from chimps and monkeys to forest antelopes and porcupines. They can then spread the virus to other humans. Once in the body, Ebola viruses rapidly replicate themselves and in three weeks, go from initial infection to a full-blown fever. Within as little as eight days, initial symptoms such as fever, sore throat, headaches, weakness and aches and cough start presenting themselves.

All patients display some degree of coagulopathy, or the inability of the blood to clot, leading to hematomas and other subdermal bleeding. The virus causes capillaries to burst as it takes over the body and bloody patches may appear on the cornea by day five.

Some patients begin to bleed from the nose and gums or expel bloody stool or vomit. Overall, 40-50% of patients experience mucous membrane bleeding, while 50% develop maculopapular rashes filled with blood. However, these symptoms are often exaggerated in the media and many patients experience no visible external bleeding.

The virus replicates so rapidly that it commonly destroys whole tissue groups around the body. Late-stage symptoms also include swollen eyes and genitals, painful skin, oral inflammation and severe bleeding from all orifices. Eventually death results from unstoppable internal bleeding, organ failure and/or shock. Ebola fatality rates range from 40-50% on the low end to over 90%, depending on the strain.

It's an unpleasant way to die.

Should the world be worried? Yes and no. This is becoming a major outbreak of a deadly virus that's spreading out of control. An Ebola epidemic poses the risk of public panic, overtaxing regional health agencies and possibly spreading outside the continent.

However, the odds of a real pandemic remain relatively low. Virologists stress that Ebola is hard to contract, requiring someone to come into contact with infected bodily fluids or contaminated objects. The virus often spreads though unsanitary medical equipment, meaning the outbreak has as much to do with poor health systems in Africa as it does with the virus itself. Unprepared hospitals can spread the disease before staff know what they're dealing with.

But Ebola is not an airborne disease and its high fatality rate and low transmissibility, coupled with quarantine techniques and border control measures, usually mean that outbreaks burn themselves out. Where Ebola has hit other continents, it's often by surprise (such as handling infected laboratory animals) and authorities respond immediately.

How bad is the current epidemic? About as bad as it gets, for Africa at least.

"There are many villages in the eastern part of Sierra Leone that are basically devastated," virologist Robert Garry of Tulane University told NPR. "We walked into one village ... and we found 25 corpses. One house with seven people, all in one family, were dead."

Doctors Without Borders has reached its maximum capacity to help and the disease is still spreading.

"There needs to be a real political commitment that this is a very big emergency," says Janssens. "Otherwise, it will continue to spread, and for sure it will spread to more countries."