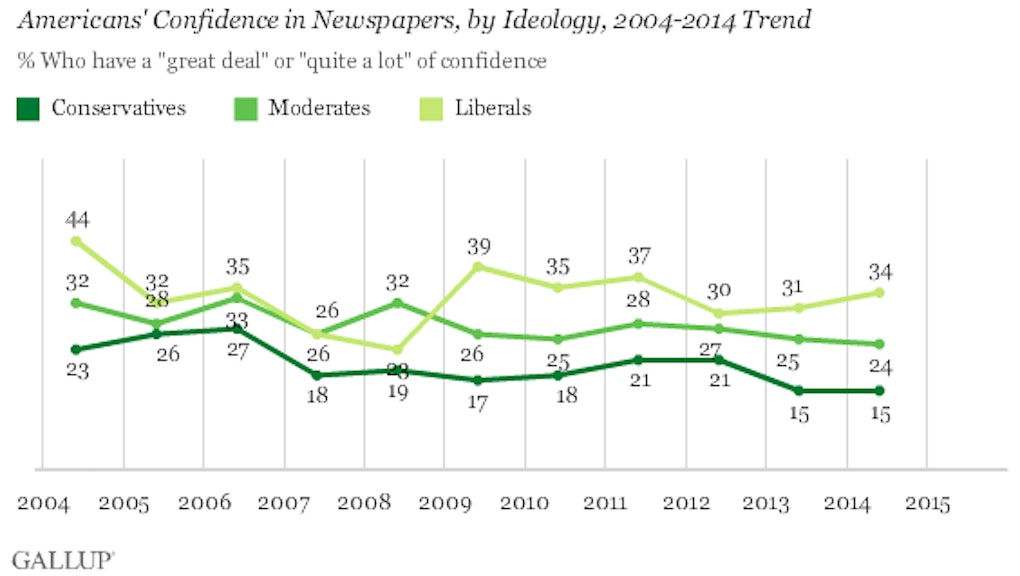 Trust in the media is at an all-time low, according to a new Gallup poll. It's the product of a decade-long decline in confidence that puts news outlets in the same league as "big business" and "the healthcare system" when it comes to public faith.

Political distinctions: The results of the survey differ significantly depending on the political affiliations of the respondents. Liberals, for instance, give newspapers a 34% confidence rating, compared to just 15% of conservatives. TV news goes the opposite way — only 15% of liberals trust what anchors tell them, compared to 18% of conservatives (and 19% of moderates).

Better than Congress: While newspapers beat out big business (21%) when it comes to confidence, Internet and TV news are next-to-last on the list. The biggest loser here is Congress, which earned the faith of just 7% of Americans.

At the top of Gallup's list of institutions is the military, sitting pretty at 74%. Small business is next at 62%, and the police came in a distant third at 53%. (Gallup does not specify, so we can only assume more than half of Americans put their faith in this.)

How can media try and turn this crisis of confidence around? Well, if you turn on CNN and see the news is being hosted by a four-star general and your local pizzeria owner, you'll know who to blame.