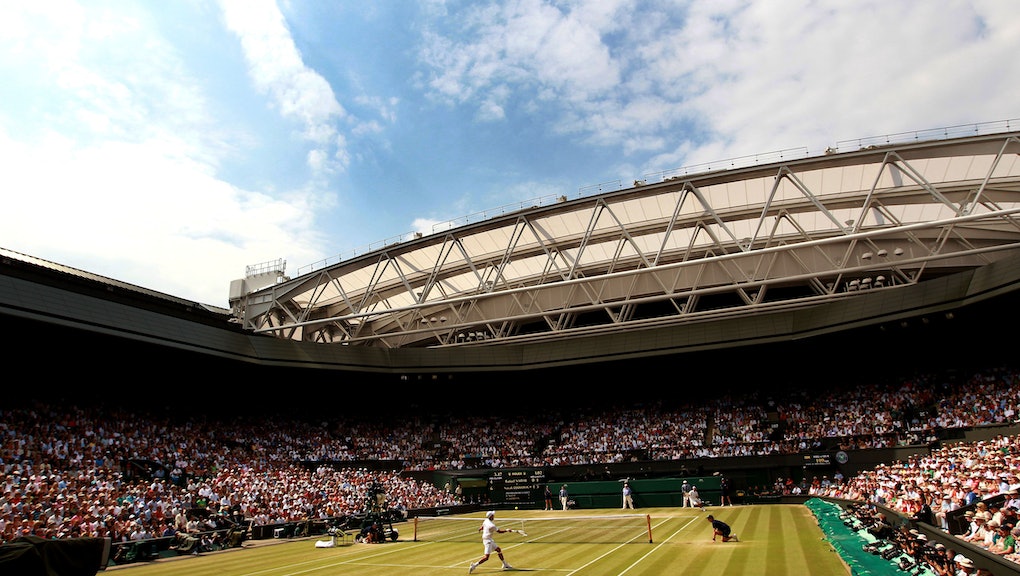 10 Players to Watch at Wimbledon You Probably Haven't Heard Of

With 128 players apiece in the gentlemen's and ladies' draws at Wimbledon, there will be no shortage of storylines as the world's oldest and most prestigious tennis tournament gets underway Monday. And while you'll hear enough about about Novak Djokovic's wrist, Andy Murray's national burden and Serena Williams' serve to keep you satisfied over the next fortnight, here's a look at 10 unheralded players who could make noise at SW19. If they spring a surprising result, you can say you saw it coming. (We won't tell.)

The tennis world has long been awaiting the the 23-year-old's breakthrough, and it seems like 2014 is destined to be the Bulgarian's year. While many might know him as Maria Sharapova's other half, he's claimed three titles so far this season, including a win at the historic Queen's Club this month to give his grass-court credentials a major boost. Knocking on the door of the world's top 10, Dimitrov is seeded No. 11 at this year's event. He's never been past the second round at Wimbledon, but as he's riding high on both form and confidence, expect that benchmark to improve.

Exactly one year ago, Bencic was crowned a Wimbledon champion... in the girls' singles. The 17-year-old, now ranked No. 77 and the youngest player in the top 100, will be making her debut in the ladies' draw at the All-England Club, and benefits from drawing unseeded Magdalena Rybarikova in the first round. A potential third-round match against No. 3 seed and Roland Garros finalist Simona Halep would offer a barometer of just how far both players have improved in 12 months' time.

The 6-foot-10-inch Croatian is a player no one on the ATP Tour wants to see across the net. Famous for his massive serve, Karlovic's game has become much more since he returned to tennis after a foot injury in 2012 and bout of meningitis last year. The 33-year-old's game is difficult to handle on any surface, but it's nightmarish on the slick grass of Wimbledon, where his lone Grand Slam quarterfinal appearance came in 2009. He's the No. 29 seed in London and faces a prospective third-round meeting with Rafael Nadal, who slumped to earlier-than-expected exits at Wimbledon each of the past two years. If doubt creeps into Nadal's game, Karlovic certainly has the experience to take advantage.

The diminutive Italian packs a punch that belies her 5-foot-6-inch frame. Cracking first serves north of 110 mph with regularity, Giorgi's brash game comes with an ice-cold demeanor. She'll rarely give a clue whether she's winning or losing, and hits every ball as hard as she can for as long as she can. Her track record is solid at Wimbledon, where she made her professional breakthrough by reaching the fourth round as a qualifier in 2012. Last year, she reached the third round before falling to eventual champion Marion Bartoli. With wins against Maria Sharapova, Victoria Azarenka and Caroline Wozniacki, no occasion has overwhelmed this soft-spoken 22-year-old. The downside? Inconsistency. Giorgi can put on a world-beating performance one round only to flame out spectacularly in the next.

The 19-year-old Australian with a bold personality and the game to match is a wild-card entrant at this year's championships. He earned the free entry courtesy of a Challenger title in Nottingham, essentially tennis's equivalent of the minor leagues. He was the Australian Open boys' champion in 2013, and will be making his main-draw debut against unseeded French journeyman Stephane Robert. Should Kyrios get through his veteran opponent, a second-round match against former Wimbledon quarterfinalist Richard Gasquet could be a blockbuster.

While Keys has been making waves on the WTA Tour for the better part of a year, most casual fans have yet to see what this 19-year-old Illinois native can really do. She's coming off of her first career title at the Premier-level event in Eastbourne, which featured a draw with five top-10 players. The win lifted Keys to a career-high No. 30 in the world in Monday's rankings, but she enters unseeded at Wimbledon since the draw was made last week. She faces feisty Puerto Rican Monica Puig in the first round, a 20-year-old who's been a recent nemesis for the American: The two have played twice in the professional ranks, with Puig winning both matches.

An atypical Spanish player if ever there was one, Lopez wants no part of the slow red clay that many of his countrymen adore. Instead, the 32-year-old thrives on quick courts. Like Karlovic, he's a veteran but enters Wimbledon in the top form of his career. He was the runner-up to Dimitrov at the Queen's Club, then claimed his second title on the lawns of Eastbourne a week later. The No. 19 seed is projected to meet ninth-seeded, big-serving American John Isner in the third round. With Isner's penchant for long matches at Wimbledon, we'd suggest stockpiling strawberries and cream and finding a comfortable viewing spot.

The Spaniard may have gone mainstream at Roland Garros, upsetting Serena Williams in the second round and riding her momentum all the way to the quarterfinals, but she's still a dangerous floater at just No. 27 in the rankings. Muguruza's season ended a year ago after Wimbledon due to ankle surgery, and she's made a stunning return to competition since then. The 20-year-old can match anyone on the women's circuit for power off the ground, which should come handy in a first-round grudge match against American Coco Vandeweghe, who upset the higher-ranked Muguruza in a Wimbledon tune-up event in the Netherlands this week en route to the title. Expect Muguruza to learn from that defeat and flip the result around at the All-England Club. She certainly has what it takes to upset Azarenka, who's played just twice since January due to a foot injury, in a projected third-round meeting.

The 20-year-old scored the biggest victory of his young career earlier this year on the red clay in Madrid, when he upset Australian Open champion Stan Wawrinka in the second round. However, Thiem's Achilles' heel could very well be his inexperience on the grass courts. He played his first career match on the surface at any level last week at the Queen's Club, losing easily to unheralded David Goffin of Belgium. While it remains to be seen just what Thiem can do in his Wimbledon debut, expect to hear his name at many Grand Slam tournaments for years to come.

The Bulgarian shocked the tennis world by reaching the semifinals of Wimbledon in 2010 ranked No. 82 in the world, and she's found her best form on the grass courts of Great Britain since. She followed up her remarkable run with a quarterfinal showing a year later and is best known for her three wins over Venus Williams in Grand Slam tournaments. The 26-year-old put together her best performance outside the walls of the All-England Club earlier this year in Sydney, beating three top-10 opponents to win her first WTA title. Former French Open finalist Sara Errani looms as the highest seed in Pironkova's path to another second-week showing, but the Italian has never shown much affinity for grass. Don't be surprised if Pironkova makes another deep run at the All-England Club.