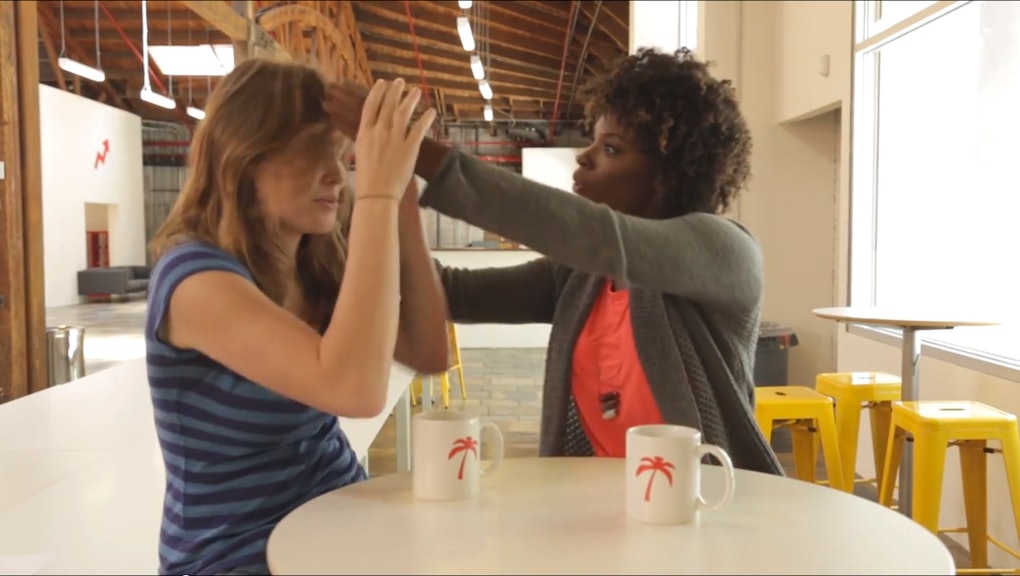 If Black People Said the Stuff White People Say, Here's How Offensive It Would Sound

Each time an ignorant blowhard like Donald Sterling says something ridiculously racist about black people, it becomes such a media circus the whole thing quickly begins to feel more like a caricature than real life. But in fact, for many black people, these types of tone-deaf, outrageous and just plain offensive comments happen every single day.

With this in mind, a new video flips the script on everyday racism, showing what would happen if white people had to deal with similar racism on a day-to-day basis.

Produced by BuzzFeed, the short video experiments with this role reversal, proving just how irritating and upsetting stereotypes become when you are part of the privileged majority not used to being subjected to them daily. The video is funny, but it makes an important point in highlighting the at-times uncomfortable invasiveness endured by many African Americans.

Importantly, the examples portrayed in this role-reversal would almost never happen in real life. But that doesn't mean it's not an essential teachable moment when it comes to race relations in America today.

According to the latest U.S. Census data, 13 percent of Americans identify as solely black or African American. That's a lot of people who still have to deal with outdated and stereotypical notions of race.

In case it wasn't clear already, many black folks don't appreciate remarks about how "well" they speak compared to what's commonly portrayed in the media. If you listen to more rap and R&B music, that doesn't make you black-er than an actual black person. And it should go without saying that "you're cute for a black guy/girl" is a backhanded compliment that reinforces the idea that an entire race of people are aesthetically inferior to whites and Eurocentric beauty standards. (For an even more comprehensive list of some of the questions black people are sick of hearing, check this list.)

One viral hit from recent years, "Shit White Girls Say to Black Girls," took on the "Shit People Say" meme to make a humorous albeit critical point about how annoying it is to be targeted by racist stereotypes.

The video's creator — vlogger and comedian Franchesca "Chescaleigh" Ramsey — wrote after the fact that her goal was to make people laugh while "encouraging some of my white friends and acquaintances to think twice before they treat their black friends and associates like petting zoo animals or expect us to be spokespeople for the entire race." Ramsey's video included many gems, including the ridiculous question: "Why is it okay for [black people] to say the n-word, but we can't?"

To the people uttering them, these types of remarks may not seem like they're that big a deal. But as the video suggests, the fall-out from such casual bigotry is more devastating than one might think, on both an individual and cultural level.

And it's not just African Americans who are targets of this type of racism. Indeed, "If Black People Said The Stuff White People Say" is simply one in a series of videos that explore the racial microaggressions perpetuated against minorities. Another video released earlier in June by BuzzFeed took a similar approach, examining what would happen if Asian people behaved in ways that white people often do in their presence.

In light of these videos, perhaps everyone should take a moment to think about the way they interact with their own friends and coworkers, let alone strangers. Mindfulness only take a few seconds, but the nasty legacy of racial stereotyping has lasted generations.