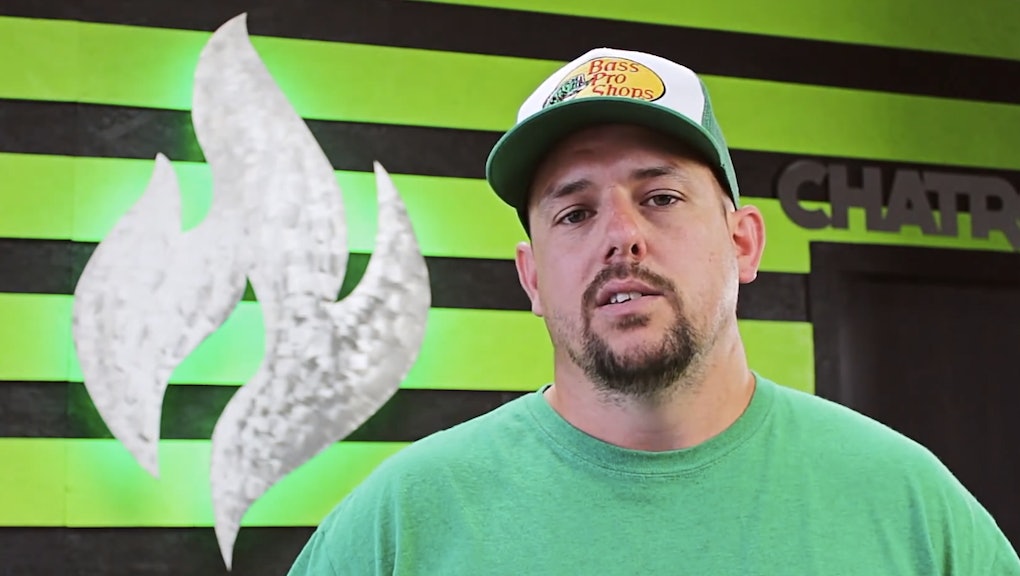 Jesus wants you to have a gun.

No, really, he does, according to Pastor Heath Mooneyham, whose Ignite Church in Joplin, Mo., gave away two assault rifles in an effort to increase attendance at his Father's Day service. In a message posted on his church's Facebook page, Mooneyham addresses all fathers interested in owning a new rifle and, fittingly, young children who may bring Dad to church: "Dads, you earn an entry for yourself, each child you have and if you bring your dad to church. Those that registered last week get to register again!!! Don't miss this."

In a supplementary YouTube video, Mooneyham is his own walking advertisement, promising raffle entrants that the weapons in question — the immensely popular semiautomatic rifle known as the AR-15 — are so powerful, "you can kill a weak zombie with that thing," or "double-tap a zombie."

But Mooneyham's advertisement took a less than welcoming turn when he suggested that anyone who skipped church or refused to buy into the raffle was a "pansy" without "big balls": "So get your butts to church," he said. "If you're late, don't cry to me that you're a pansy and you cannot set your alarm, all right? You're a big boy. You got big balls between your legs. You're a dad, right?"

Apparently the best way to "find God, find life [and] find others" (the Church's motto) is through the high-powered sight of a military-grade rifle.

But not everyone was pleased with Mooneyham's raffle.

"I think giving away weapons, with all the violence in this country, gives way to new violence," Steve Urie, pastor at nearby Joplin Diversity Fellowship, told the Joplin Globe. "I don’t think it’s just nontraditional. I think it’s careless and reckless."

Still, Mooneyham's stunt was successful in that it certainly grabbed headlines. And this particular church also has a history of using sensational means to spark attendance and attract media attention. Back in 2011, for example, the church began a campaign to persuade straight, married couples to have sex with each other to avoid "being tempted into sin."

"We're doing a series about sex, and God's intended purpose for it," Mooneyham told ABC News at the time. "We're hitting things like adultery and pornography."

Individuals are free to understand their God in their own way, but leaders of a religious congregation are presumed to have certain responsibilities to that community. Mooneyham's desperation for an audience, in more ways than one, is irresponsible and unethical, given the simple fact that research has linked gun violence to access and availability of weapons.

That is to say, more guns equal more gun violence.

As my colleague Matt Connolly wrote earlier this month, Harvard researchers have found "'a strong and statistically significant association between gun availability and homicide rates.' More specifically, each percentage point increase in proportion of household gun ownership is related to a 0.9% increase in homicides. The study controls for general crime rates and other social and economic variables."

Perhaps there are other ways to promote one's religion other than through raffling off guns; somehow, the message of spreading "God's love" appears weakened if that love is undergirded by a symbol of death.