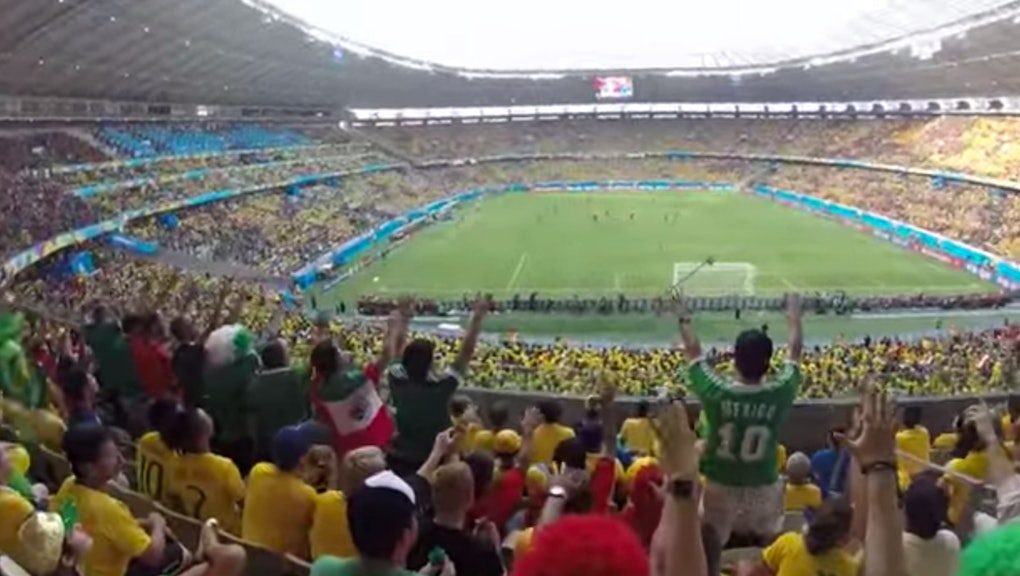 Could soccer be the most homophobic major sport in the world?

Dwarfed in the United States by professional football, basketball and baseball, soccer — or football everywhere else — is not known as a bastion of prejudice. Indeed, while gay and lesbian athletes have made headlines for coming out in the pro football and basketball spheres over the past decade, Los Angeles Galaxy player Robbie Rogers made fewer waves when he became the first openly gay soccer player in Major League Soccer.

Maybe this is why recent homophobic and racist comments made during the World Cup have been so surprising for some fans.

But the sport, which borders on a religion in many countries, is also a breeding ground for rabid fans who don't take kindly to having their traditions policed. Last week FIFA did just that however, launching an investigation into allegations that Mexican and Brazilian fans were chanting homophobic slurs during games, much to the irritation of the fans themselves.

In particular, some people complained that Mexican fans yelled "puto" each time the opposing goalie from Brazil got ready to kick the ball. Mexico fans did the same in the World Cup match against Cameroon, when the chants were clearly audible on live broadcasts.

The term, which has multiple translations, is used as a slang insult meaning anything from "coward" to "fag." The inconsistency in meaning has lead many fans to argue that it's not homophobic at all. This argument doesn't fly with SB Nation's Jim Buzinski, however. "It's been amazing to see how many people have commented on various websites defending the use of 'puto' and claiming it's not homophobic," Buzinski writes. "Some point to it as a Mexican tradition, ignoring the fact that its use at games only started in 2003 (I have shirts older than that)."

Here is a video of fans loudly chanting the slur during the Mexico versus Brazil match on June 17:

One of the biggest defenders of the chants has been Mexico's coach, Miguel Herrera.

"This is something that's used to pressure the opposing team’s goalie," Herrera told a Mexican radio station, denying that homosexuality was the punchline. "It's something that we're not really worried about."

Herrera's logic for defending the fans is that when they scream the phrase at the other team's goalie, they just want him to fail. Many have argued that in the "soccer context," the offensive word is used to call out cowardice, not imply someone is gay. But using a homophobic word, even if it's not meant to indicate that the fans think the player is gay, doesn't make it acceptable.

"The connotation is cowardice, more than thinking of a homosexual. But the [gay person] is the one that is acting cowardly, doesn't have courage," Alejandro Brito Lemus, director of Mexican magazine Letra S, which covers LGBT issues, told the Christian Science Monitor.

Unfortunately FIFA seemed to agree with Herrera, and cleared Mexico fans of any misconduct. This move sends a troubling message about tolerance in international soccer today. (The World Cup features hundreds of players from 32 countries this year, but none of them are openly gay.)

Mexico City has made progress in protecting LGBT rights by legalizing same-sex marriage, and there is more openness in major cities, but curbing homophobic chants in sports, where shows of masculinity are treasured, has always been problematic. Case in point: A Brazilian clothing company sold out a line of T-shirts which used gay slurs in reference to soccer stars Cristiano Ronaldo and Diego Maradona.

A poll taken before the World Cup showed that fans in most countries are ready to accept a gay player on their national team. The prevalence of anti-gay chants at even the most prestigious levels of the sport, however, does not exactly foster an accepting atmosphere.

Germany's Thomas Hitzlsperger is perhaps the most prominent international soccer player to come out as gay in the past year. "I was never ashamed of being who I am, but it was not always easy to sit on a table with 20 young men and listen to jokes about gays," Hitzlsperger told the Guardian. "You let them get on with it as long as the jokes are somewhat funny and not too insulting."

Soccer's reigning body, FIFA, hasn't done too well when it comes to handling the issue. While FIFA and its president, Sepp Blatter, promised to have a discrimination-free World Cup in Brazil, their refusal to stop the "puto" chants doesn't inspire much confidence, particularly in light of the organization's strong efforts to eradicate a longstanding history of racism in the sport.

Meanwhile in Qatar, slated to host the 2022 World Cup, homosexuality is actually technically illegal. When asked about Qatar's anti-LGBT laws, FIFA's Blatter urged fans to "refrain from sexual activity" if they planned to attend the games. He later apologized. Similarly, the 2018 World Cup will be held in Russia, which has introduced laws that ban gay "propaganda."

Clearly gay rights are not a top priority for FIFA, and that message is resonating at a national level. As Brito suggested in the Monitor, the chants aren't going to be stopped by sanctions, even if FIFA was willing to step up to the plate. Instead, FIFA should start with education, awareness and diversity campaigns in the same way it has targeted racism. Everyone deserves to feel free to be themselves, especially at the greatest sporting spectacle on Earth.