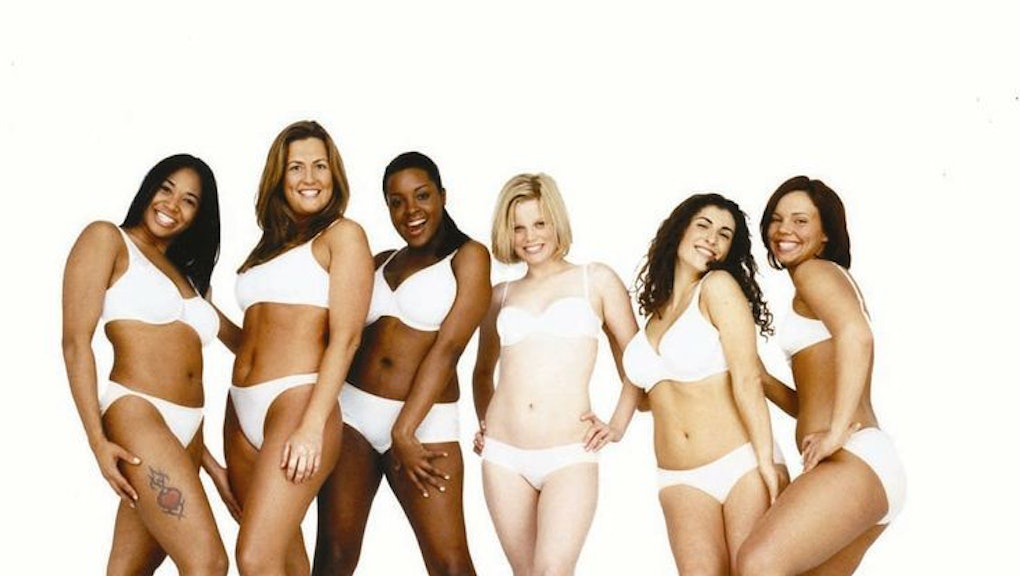 Whether you like it or not, Pantene Pro-V's latest stereotype-shattering commercial got us all talking. The ad, whichfeatures fictional female characters acting over-apologetic, was meant to highlight the (apparently strictly feminine) urge to incessantly say sorry. Although the ad is accurate — women do say the word "sorry" more often than men — what's the connection between this social phenomenon and hair products? And more importantly, why are so many companies these days demanding, as a marketing plot, that women change?

Whether it's Lean In or the Confidence Code, blaming women for their oh-so-feminine ways, instead of questioning the way men do things, is a popular trend in feminism. Where's the Head and Shoulders campaign telling men to apologize when they hog the armrest at the movies? Or the Levi's campaign demanding that dudes close their legs on the subway?

Of course, feminism and women's empowerment, being the hot topic that is, has long been used by corporations to sell goods, because it (unfortunately) works. Pantene didn't reinvent the wheel — they are merely applying what companies have already been practicing for decades.

As Nancy Fraser writes in "Feminism, Capitalism and the Cunning of History," at its roots, the feminist movement's raison d'être was to dismantle patriarchy, and with it capitalism, but the second wave of the movement in the 1960s brought with it an ideology of women's emancipation tied to capitalistic notions of power. Fraser concludes that "feminists should end our dangerous liaison with marketization" and be wary of actors who push for it. But that hasn't happened, as evidenced by current feminist icons like Beyoncé and Sheryl Sandberg.

Clearly, capitalism and feminism are no longer mutually exclusive. To many activists and advocates, this relationship is treacherous. Gender theorist bell hooks recently (and infamously) said that Beyoncé was "a terrorist, especially in terms of the impact on young girls." Despite that being a fairly radical position, it's worth exploring the way companies have benefitted from co-opting feminist notions.

To truly understand the potential harm that ads like those crafted by Pantene present, we need to observe them within a larger historical context. Corporate interest has often mixed with feminism, but some permutations of it are worse than others. Let's take a look.

1. Virginia Slims fought for your equal right to die from lung cancer.

If you've ever been to a women's studies class, you've heard of the overt attempt by Virginia Slims in the 1960s to co-opt feminism to sell women more cigarettes. In an attempt to profit off women's liberation, the company relied on empowering messages and the tagline "You've come a long way baby," appealing to recent victories like the Equal Rights Amendment and Roe v. Wade. Many of the ads showed women being shamed for smoking in public, a negative association that Virginia Slims was very adamant (and, let's be honest, personally invested) about eradicating. The corporation wanted to fight for women's right to smoke in public because it meant women would buy more cigarettes.

As historian and gender scholar Ruth Rosen points out in the Huffington Post, "As it happened, the only equality this campaign ended up supporting involved lung cancer. Today, women and men die at similar rates from that disease."

According to medical research, women are more vulnerable to health problems when they smoke, and lung cancer is set to replace breast cancer as the most common cause of death for women because of the "surge in the number of women who started smoking in the 1960s and 1970s."

When Dove started its "Real Beauty" campaign a decade ago, many female consumers were excited — until they realized that the ads did little more than perpetuate restrictive standards of beauty. Despite a concerted effort to launch self-esteem camps for young girls and a stated intention to drive a conversation about beauty standards, many women saw through the ads.

Not only did the women in the commercials still have nice bodies, normative hip-to-waist ratios and flawless skin, they also were Photoshopped.

Jennifer Pozner, the founder and executive director of Women in Media & News and the author of Reality Bites Back: The Troubling Truth About Guilty Pleasure TV, believes this kind of campaign is thinly veiled corporate marketing.

"While I definitely appreciate Dove's investment in some media literacy projects for girls and some awareness-raising about unrealistic beauty standards in the media, fashion and cosmetics industries, we can't forget that the company isn't doing this for magnanimous purposes," Pozner told Mic. "They're doing it to co-opt feminist anger at unhealthy beauty standards and media manipulations. Make no mistake: It is extremely profitable to redirect feminist energy away from media activism and toward the drugstore beauty aisle."

Dove's campaign didn't only drive attention, it also drove sales. According to the Huffington Post, Unilever executives have made it clear that the campaign significantly boosted revenue. Women's self-esteem, on the other hand? Not so much.

3. Kellogg's wants you to shut up about the insecurities they've helped you develop.

Given that Kellogg's is responsible for a campaign entitled "What will you gain when you lose?" (which provoked a Change.org petition from eating disorder activists) and a plethora of ads presenting weight loss as the only path to self-worth, this commercial shaming females for feeling bad about their bodies is despicable. By holding women responsible for their bodily insecurities, Kellogg's ignores or denies that it has itself perpetuated those insecurities in the first place. Kellogg's has also capitalized on them. To put it plainly, if women were no longer insecure about their bodies, the diet food industry, which the company dominates, would go out of business.

4. Cover Girl thinks girls can do anything they want, as long as they keep putting stuff on their face.

This ad did not sit well with many women. Sure, it had Ellen DeGeneres, who has called out companies for trying to profit off ladies before, but the "just be you" message the company pushed in this commercial seemed contrived. Cover Girl, a company that'sspent the last 50 years telling young girls "Your personality needs layers, your face doesn't" and whose core message is, after all, to encourage women and girls to alter themselves to fit an unattainable standard, shouldn't be co-opting feminist messages of empowerment to drive profits.

To be clear, feminism and makeup are not diametrically opposed. Feminists can wear makeup, but makeup companies can't "wear" feminism. The movement isn't something you switch on momentarily for a campaign to make money; it's something you incorporate into everything you do. Something tells me Cover Girl's sudden interest in female empowerment is fuelled by the former.

This 1990's ad from Johnny Walker speaks for itself.

6. Entrepreneurial Barbie wants to give you an eating disorder and an iPad too.

10 Worst Ways Companies Have Used Feminism To Sell Women ProductsPutting aside the #unapologetic hashtag used to promote Barbie's cringe-worthy Sports Illustrated cover, the campaign to brand Barbie as empowering for girls because she's "entrepreneurial" is not only weird, it's off-putting. The fact that she has an iPad and a fancy knee-high dress doesn't change the fact that the doll essentially embodies female oppression in all its forms. Her proportions are so distorted that doctors concluded they would lead to health problems, like not having enough body fat for menstruation. It's no surprise that girls who play with thinner dolls eat less afterward. Research also shows that being exposed to Barbie narrows girls' ability to envision a broad spectrum of career opportunities.

Knowing all this makes it difficult to believe that Mattel has a genuine desire to empower girls. If they did, they would change more than just Barbie's attire; they would fundamentally transform the product. Then again, Mattel trying to give Barbie a feminist makeover is like Playboy trying to integrate feminist theory into its articles. No one is buying it.

7. Dove wants you to be insecure about your insecurities.

To borrow the beautiful words of Jessica Valenti, "beauty companies now want women to feel insecure about our insecurities."

Unlike "Evolution," the campaign that focused on the beauty industry's mass use of Photoshop, the largely derided sketches campaign didn't blame the big players for creating insecurities — they blamed women. By getting "regular" women to describe their faces to a forensic artist, they uncovered the shocking insecurities that their parent company, Unilever, has built its empire on. The video, intended to shock us all to see women being so hard on themselves, was instead criticized for its omission of the origin of those insecurities. Women are not born thinking they are fat/ugly/unlovable/unworthy, they are taught to feel that way by the beauty industry, an empire on which Unilever comfortably sits.

The only positive thing that came out of this campaign is this glorious parody video flipping Dove's assertion about women and self-esteem on its head, scrutinizing men's overconfidence instead.

8. Bond with other women about the fact that you both like to buy crap.

Female friendships: great when marching all over the patriarchy, but also useful for selling soup!

9. Swiffer wants you to channel your inner Rosie the Riveter and clean the damn floor.

Although Swiffer quickly apologized for the offensive ad from a 2013 marketing campaign, the appropriation of Rosie the Riveter, one of the most iconic feminist icons, to sell cleaning products to women launched a slew of online outrage. The Representation Project launched an impressive #NotBuyingIt campaign and called for a boycott. It was enough to scare the company into discontinuing the advertisement.

10. Snickers believes men are "themselves" when they sexually harass women.

In an attempt to be "funny" and "feminist," Snickers ruined chocolate for everyone by assuming that men are naturally Neanderthals who cannot behave themselves in the presence of boobs. The commercial takes place on a construction site, and depicts workers shouting feminist statements at female passersby. The problem is that Snickers frames this kind of behavior as men "not being themselves" because they are hungry. In the world that Snickers inhabits, men are incapable of respecting women, and being a kind, compassionate human being can be corrected by buying their product.