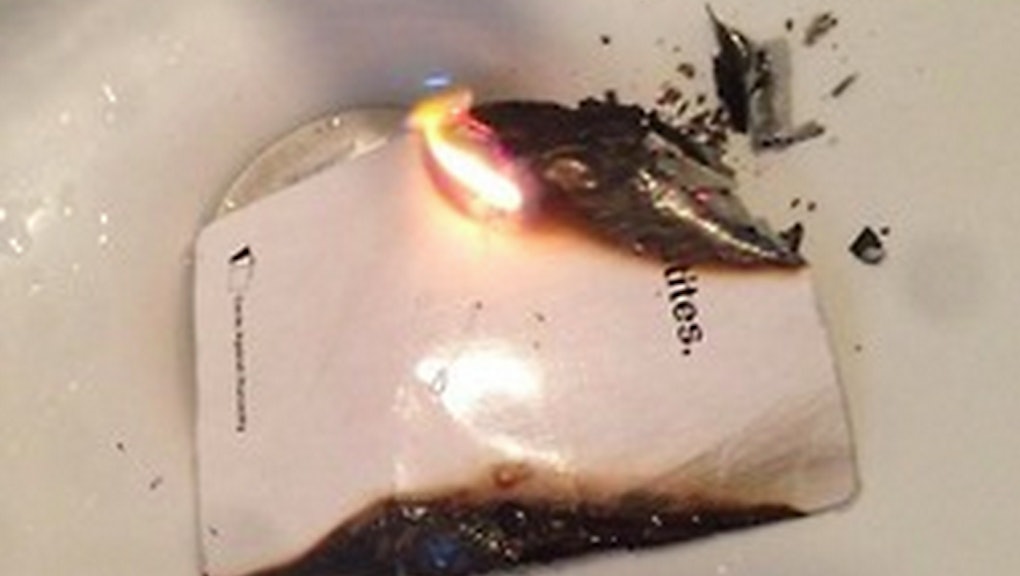 The Absolute Worst "Cards Against Humanity" Card Has Been Discovered

The news: "Cards Against Humanity," the purposely outrageous card game that plays like Apples to Apples for grownups, is not for the faint of heart. But one player recently found a card that crossed the line from bitingly funny to downright hurtful.

Tumblr user horriblewarning, real name Jonah, was playing the game when he found a card that read "Passable transvestites." Jonah, who identifies as a transgender male, didn't find it the least bit amusing. Instead of simply discarding it, however, he decided to make a stronger statement: He lit the card on fire and posted the pictures to his Tumblr with the caption "DEATH TO TRANSPHOBIA."

The response: In a word, overwhelming, with more than 52,000 notes on Tumblr as of Monday. "It got bigger than I ever thought it would," Jonah told Fusion. Much of it has been positive, including a response from a very important source: one of the game's cocreators.

"I regret writing this card, it was a mean, cheap joke. We took it out of the game a while ago," wrote Max Temkin on his own Tumblr after being alerted to Jonah's photos. "When you have something that starts to be part of pop culture, you can't help but see how it makes people feel and feel some sense of responsibility for that," he added.

However, the card is also seeing criticism from the other side — those who think a game billing itself as "a party game for horrible people" shouldn't censor itself because of public pressure. In the National Review, Charles C.W. Cook argued that the trans community is overreacting, writing, "Perhaps I just read too much of the Left's output, but I'm starting to wonder whether 'trans' people are engaged in some sort of concerted effort to be the most vocally boring and self-indulgent members of the perpetually aggrieved."

Mary Katharine Hammer, a conservative-leaning journalist, let out her feelings in a series of angry tweets:

The takeaway: For a game that prides itself on pushing as many buttons as possible, "Cards Against Humanity" has been remarkably skilled at walking the line between humor and disrespect. It's one thing to lambaste popular figures like Miley Cyrus, Glenn Beck or Lance Armstrong. But when the target becomes a marginalized group that has faced enormous difficulties gaining acceptance in the public sphere, things very quickly go sour.

Perpetuating blanket negative views of already-marginalized groups adds nothing of value to the game. Jokes like these are a lazy way to pile on top of people who already face societal pressures in their everyday life.

Temkin said it best himself: "It's something that we stand behind: making fun of those power structures, because they're already powerful. Making jokes about rapes, making jokes about trans people, they don't have the same cultural power."