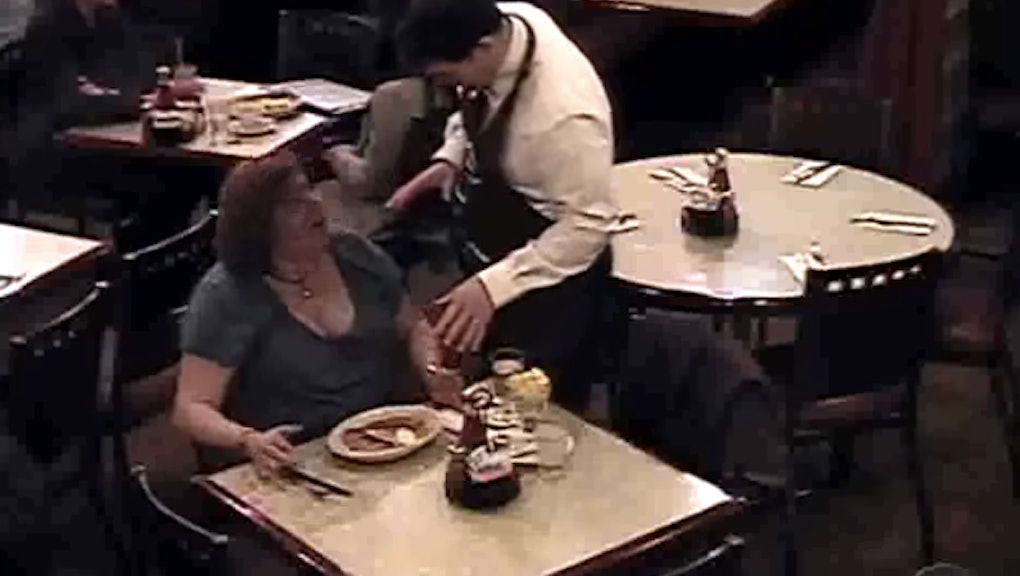 What people choose to eat in public should be no one else's business, regardless of their weight.

Unfortunately, overweight men and women sometimes have to deal with others' thoughts about their food choices. This is fat phobia, plain and simple, and the hidden camera show What Would You Do? set up shop in a New Jersey restaurant to watch how people reacted to witnessing this kind of patronizing critique, often called concern trolling, in the real world.

In the video, filmed several years ago but recently unearthed, a waiter, Jeremy, reprimands a fat customer, Kathryn, for ordering calorie-dense menu items like chocolate chip pancakes and bacon with seeming abandon. (Both Jeremy and Kathryn are actors.)

"I just feel really bad about bringing you all this food," Jeremy says. "There's an epidemic in our country ... I'm just trying to help you, that's all."

The segment is uncomfortable at first, but ultimately uplifting as diners passionately defend Kathryn, asserting that everyone, of every size, deserves respect.

Fat people are often subject to rude, misguided commentary regarding what they eat. But it's really no one else's concern, as an elderly diner informs Jeremy: "It's not your job to tell people how to be healthy. It's insulting," he says. "If I ran this place, you'd be fired in 30 seconds."

Not everyone agrees ("I thought the waiter had good intentions," another older gentleman says), but many other customers stick up for Kathryn by calling out Jeremy or complaining to the restaurant manager. One woman is even moved to tears.

Unfortunately, the dynamic sees a dramatic shift when a conventionally attractive, thin actress named Ashley takes on the role of the waitress. Coincidentally (or so the video's narrator, ABC host John Quinones, claims), Kathryn is surrounded by male diners after this swap. Not only do these men not say anything to defend Kathryn, but they actually take pity on the waitress — as if she is the one being put out by a troublesome customer.

"Definitely don't let it get you upset at this point," one man tells her.

Female diners did not have the same reaction to Ashley. "People don't treat other people that way," one says.

The video certainly isn't perfect — it equates fatness with being unhealthy and mentions items overweight people "shouldn't be eating," for example — but its point is a valid one. This type of fat-shaming, done in public or in private, really is just fat phobia dressed up in (very condescending) good intentions, and there is never any excuse for it.

For one thing, making people feel bad about their bodies will not make them lose weight, meaning that fat-shaming as a supposed health ploy is illogical.

More important, it's essential to remember that there's actually nothing wrong with being fat in the first place. Fat is not inherently unhealthy (really, it's not), and it's not possible to gauge someone's typical eating and exercise habits based on his or her size. In fact, it's often downright harmful to make assumptions about people's health based on their weight.

It's pretty heartwarming to see strangers rally behind Kathryn, and this video should serve as a reminder that there's absolutely no reason to judge people by their size or what they eat. In fact, let's stop judging people altogether.