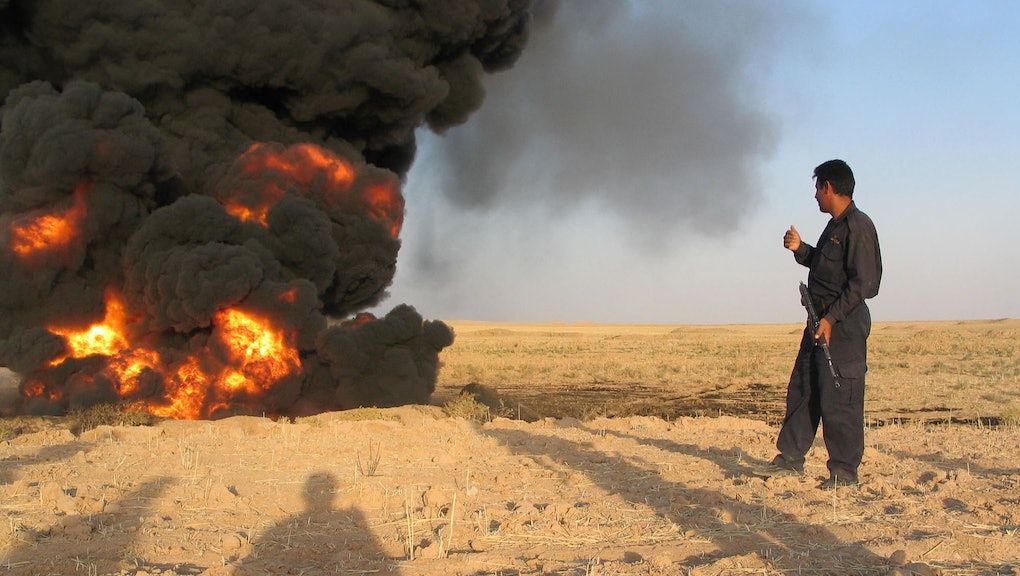 The news: After 10 days of military offensive, the Islamic State in Iraq and the Levant (ISIL) insurgent group has besieged the important oil refinery Baiji, according to several reports.

By seizing the Baiji refinery, which is near Baghad, ISIL demonstrates their sophisticated ability to achieve the ultimate goal of forming a caliphate. In supplying energy to their territories, they can continue on a domineering path, which has been apparent as the insurgents have proven to be resilient through the use of aggressive tactics.

If the reports are true, the Sunni rebel group would control the largest oil refinery in the country. Baiji, which is responsible for one-third of Iraq's oil output, doesn't export oil, but is "mostly responsible for domestic supply, largely within the areas contested by [ISIL]," reports Vox.

The country's largest oilfields are in the northeast and southeast regions, which have yet to be disrupted from conflict. However, fighting has affected one of the vital pipelines that delivers around 600,000 barrels of oil per day. (That pipeline has been in repairs since 2013, but repairs are currently at a standstill).

And if the conflict spreads, it could threaten oilfield operations in Kurdish territories, including a refinery near Mosul that produces roughly 260,000 barrels a day, and is responsible for one-sixth of the country's reserves.

This has caused a surge in Iraq's oil prices. As a country that does not export a lot of petroleum, Iraq is only responsible for 4% of the world's oil supply. Given its distraught landscape, the occupation has only minutely affected world market prices of oil. Prices have risen 77 cents, according to the Brent Crude Oil Index.

This map, from June 12, shows the overlapping areas of ISIL control and oilfields or pipelines. Iraq has the fifth largest oil reserves in the world, and has been working to ramp up production from 3.3 million barrels a day to 5 million. And the increase in production would affect the global market, which is constantly demanding more supply outlets.

What does this all mean? There are conflicting reports about who is controlling Baiji. The ISIL victory was refuted by Iraq's Minister of Foreign Affairs Hoshyar Zebari, who said, "Iraqi special forces soldiers were in control," according to Al Jazeera.

If verified, Baiji's capture may force Iraq and its current allies to change their course of action. ISIL is quickly gaining momentum, and will not be deterred in the near future. With circumstances mounting towards a full-blown civil war, taking over Iraq's oil fields marks just one step in ISIL's plan for total control. And without a quick-fix, this conflict will have reverberating repercussions likely to be felt worldwide.

Also, ISIL's advances follow failed negotiations between tribal leaders in the region and amidst U.S. Secretary of State John Kerry's two-day trip to Iraq for a round of talks with leaders.

During Kerry's visit to Baghdad, he had promised "intense and sustained" aid to the Iraq crisis, but maintained a desire for a more inclusive government. Kerry said that the country has to "find a leadership that was prepared to be inclusive and share power." This common sentiment in Washington is putting pressure on Prime Minister Nuri al-Maliki, who leads a Shi'ite Muslim government, to bridge the sectarian rift in the region.