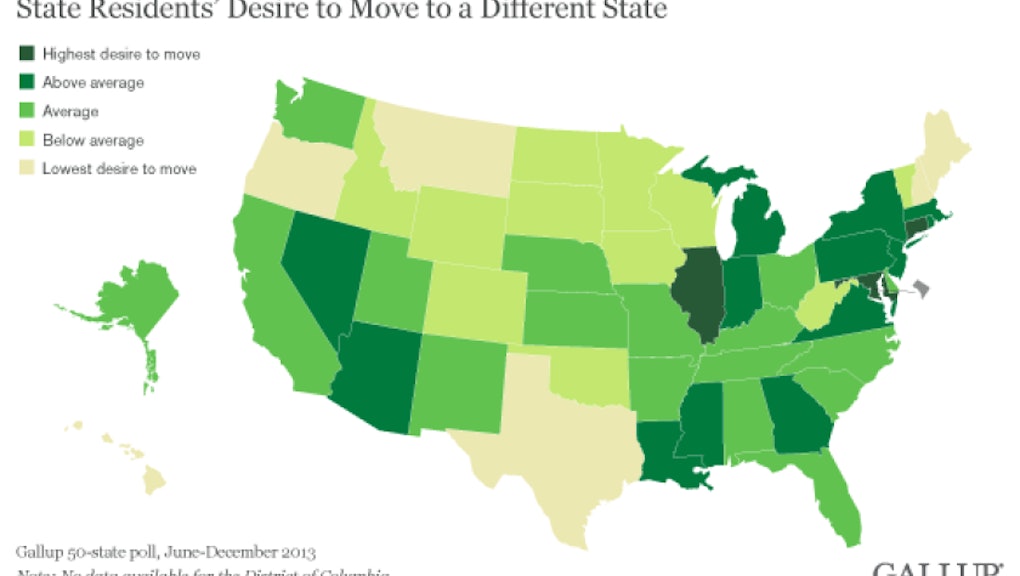 The U.S. States People Want to Flee the Most

For some states, the results weren't pretty. A full 50% of Illinoisians said they'd like to skedaddle, while similar percentages claimed the same in Connecticut and Maryland. Forty-three percent of Nevadans said the same. Rhode Islanders, New Jerseyans, New Yorkers and folks from Massachusetts and Louisiana also polled at least 40%. Mississippians clocked in at 39%.

But... Don't overstate the results. The states that scored best still had a 23% dissatisfaction rate. To some extent, the results reflect the natural mobility of a fluid, growing population. Furthermore, very few people actually said they were likely to move. (In Nevada, Illinois and Arizona, almost 1 in 5 people were planning to get out in the next year.) Nationally, just 6% of respondents said that they were extremely or very likely to move.

More data: Because this is Gallup, they did us the courtesy of sorting out why people want to move. For the most part, it's for work or business-related concerns, perhaps indicating a weak local economy, but family and friends come in at a close second. One major outlier is New York, where 1 in 5 people who said they were planning to move cited cost of living as their primary complaint. (Numbeo.com reports the average price of a mid-range restaurant meal for two is $80, while utilities for a 915-square foot apartment average $153.36.)

Illinois, apparently, has depressing weather and location. And nearly a full 50% of South Carolinians and Mississippians had to move for work reasons, maybe indicating a lack of steady work. Meanwhile, a small number of people find taxes hard to stomach in New York, Illinois and Maryland.

Image Credit (all above): Gallup

Do the results match up to what other polls about states say? To some extent, yes, actually. Here's how the 2013 Gallup/Healthways Well-Being Index ranks states according to their overall quality of life:

Of the top five states of people who want to move (Illinois, Connecticut, Maryland, Nevada and Rhode Island), only one, Maryland, ranked above the third quintile. And of the states which reported the fewest residents looking to get out (Montana, Hawaii, Maine, Oregon and New Hampshire), three were in the top quintile, one was in the second, and one, Oregon, was in the third.

Wide stretches of the South rank in the bottom quintile, but just two (Mississippi and Louisiana) were in the top 10 states with outbound populations. Who knows why — perhaps Southern populations don't have the resources or desire to move.

And for what it's worth, Montana is sounding like a great place to live on both metrics.