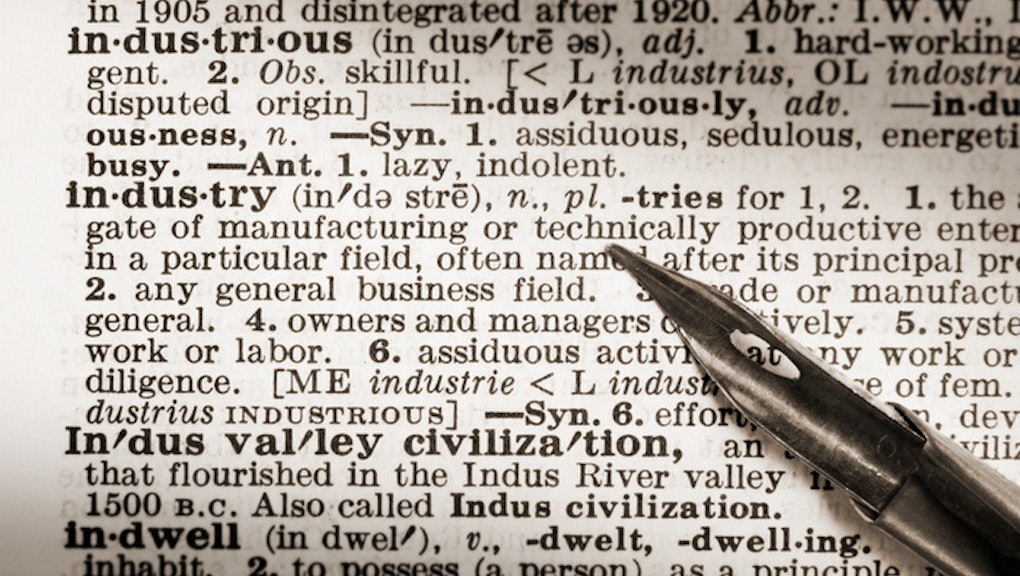 16 Facts You Probably Didn't Know About the English Language

The English language is enourmous. An unabridged dictionary can easily top 600,000 entries. But it didn't get that way overnight. For hundreds of years, English has begged, borrowed and stolen from other languages to become the tongue we know today. Here are 16 facts you may not know about the English language and how it came to be.

1. English is an official language in 79 countries and territories.

As of 2014, English is an official language of the government in 58 sovereign states and 21 non-sovereign entities, including everywhere from Caribbean islands like Barbados and Grenada, to African countries like Kenya and Cameroon, to Singapore and the Philippines in Southeast Asia, all the way to the tiny island nation of Niue in the South Pacific. (Tracing the map of who speaks English and where is also a pretty quick way to track colonialism around the world.)

2. But English is not the official language of the U.S., the U.K. or Australia.

Now when you're arguing with that infuriating guy who says, "This is America, we speak English here," you can tell him what's what.

Celtic tribes were some of the earliest inhabitants of the British Isles, though they weren't the first people to live there. The Romans brought Latin to Britain when they made it part of the Roman Empire, which officially lasted until the early 5th century CE. With the Romans gone, Germanic tribes like the Saxons, Angles and Jutes began invading and settling in different parts of the island.

Old English (like in Beowulf) sprang from an epic mashup. The Anglo-Saxons called their new home Englaland, the Land of the Angles. Its emerging language was called Englisc (now called Old English or Anglo-Saxon), which eventually produced four major dialects: Northumbrian in northern England and southeastern Scotland, Kentish in southeastern England, West Saxon in southern and southwestern England and Mercian in the midlands.

4. The Mercian dialect is considered the basis of modern English.

Not much has survived of the dialect that arose in the Anglo-Saxon kingdom of Mercia, a major power from the mid-7th to the early 9th century CE, but Mercian was crucial to the development of Middle English. One of the most important pieces of this puzzle comes from a manuscript written by a monk named Orm who lived in the English Midlands in the 12th century. The Ormulum is a 19,000-line poem recounting biblical homilies, but what makes it actually interesting is the scribe's insistence that everyone else is speaking English wrong, so he's going to write out how it should be done. Not only did he start to standardize spelling conventions, he did it so clearly that we have a pretty good idea now of what Middle English sounded like at the time.

5. The history of English is divided into three periods: Old, Middle and Modern.

Old English looks like this (from a passage from English abbot Ælfric of Eynsham's Homily on St. Gregory the Great):

Middle English looks like this (from a passage taken from the fictional Mandeville's Travels):

In þat lond ben trees þat beren wolle, as þogh it were of scheep; whereof men maken clothes, and all þing þat may ben made of wolle. In þat contree ben many ipotaynes, þat dwellen som tyme in the water, and somtyme on the lond: and þei ben half man and half hors, as I haue seyd before; and þei eten men, whan þei may take hem.

These bring us to Modern English, which was born around the middle of the 16th century. The phonological changes that began in the late Middle English period completely revolutionized the language. The development of the printing press, a heavier influence of Latin and Greek and expanded contact with other cultures also helped bring us to the language we speak today.

6. William Shakespeare was probably one of the biggest influences on the English language.

NBD, but in late the 16th and early 17th century, ol' Billy took advantage of the nonstandardization of English to great effect, and contributed to the standardization of grammar, spelling and vocabulary. His own vocabulary was extensive (some 34,000 words), and he gave us around 1,700 original words of his own (lonely, frugal, dwindle, hot-blooded, fragrant), many of which are still used. He also invented or popularized common phrases like "neither here nor there" (Othello), "mum's the word" ("Seal up your lips, and give no words but mum," Henry VI, Part II), "a wild goose chase" (Romeo and Juliet), "there's the rub" (Hamlet) and "all of a sudden" (The Taming of the Shrew). You can also credit him for bedazzled (The Taming of the Shrew), zany (Love's Labour's Lost) and puking (As You Like It).

7. Many of our words come from the Vikings.

During the 800s, Scandinavian Vikings expanded into many parts of Europe. Large numbers settled in Britain, bringing Old Norse with them, including many words like ransack, knife and take.

8. They also come from the French.

In 1066, William the Conquerer, the Duke of Normandy in northeastern France (where they actually called him "William the Bastard"), established a kingdom and a culture that made French language and culture supreme in Britain. Anglo-Saxon words and language patterns persisted in the lower classes, but the nobility was all about what the king spoke. That French influence is still all over our vocabulary: An example is our word duty, which does not come from the Old French devoir, but rather from duetee, an Anglo-French word familiar in medieval London. You can say merci, français for lots of other words borrowed from the French, including food terms like fry, boil, butcher and beef, as well as legal terms like court (as in, law court), judge, attorney and plaintiff.

In the Middle Ages, London became a center of trade, and as trade routes grew, English adopted shipping words from the Dutch, like buoy, skipper and dock, as well as art words like easel, etching, landscape and sketch, and food words like brandy (wine), coleslaw, crullers and waffle.

England was never cut off from everyone else (see also: the Crusades), but after the 15th century and the discovery of the New World, trade routes expanded greatly. During this age of exploration, English absorbed whole new worlds of words, from the Spanish (armada, bravado); from the Chinese (tea); from Germany (quartz, dachshund); from Arabic (hashish, mosque, bazaar); from Hindi (chintz, cummerbund, pajamas); from the Italian Renaissance (cameo, fresco, balcony, umbrella, violin); and from Australia (kangaroo).

To describe new inventions, we borrowed from Latin and Greek for words like omnibus, cinema, photograph, thermometer and telegraphy.

11. We add new words to the lexicon each year.

To much of the world's dismay, Oxford Dictionaries Online officially legitimized selfie and twerk last year. As of May 2014, other words added include cryptocurrency, perf, bikeable, audax, gran fondo, snacky, omakase, white pizza and time suck, as well as new senses of ship, thing, crazy and slash. This year, Merriam-Webster added words like hashtag, tweep, turducken and a new kind of catfish to its dictionary.

12. The longest word in English is pneumono­ultramicroscopicsilicovolcanoconiosis.

This 45-letter word, the longest recognized by the Oxford English Dictionary, is a lung disease caused by inhaling volcanic silicon dust. The two second-longest English words are antidisestablishmentarianism (opposition to the disestablishment of the Church of England) and floccinaucinihilipilification (the estimation of something as worthless). Kind of like, say, the need for a 45-letter word for a disease caused by volcanic dust.

13. Until about the mid 1500s, there was no word in English for the color orange.

Orange you glad that Moorish Arabs brought the first orange trees to Spain in the Middle Ages? Since so few things that occur in nature actually are orange, people usually said those objects were "gold" or "amber" instead. The fruit which came with the Sanskrit name naranga eventually became orange in English.

There are thousands of British and American slang words and idioms, many of which have deep historical roots. It (sort of) began with regional differences in pronunciations and dialects, but slang began to be considered a "thing" in the 16th century, when the English Criminal Cant developed. This was used by foreigners or criminals as a new form of speech, and it was considered taboo by outsiders. Nonetheless, it made its way into the mainstream and into works like Robert Copland's mid-1500s play The Hye Way to the Spyttel-Hous. Since then, slang has become more acceptable, and has been employed to ensure secrecy, as a way for groups to form identities, to play with language and of course to insult others.

Take redneck, which many people think is a variation of a "hillbilly" (which is another story). The word actually dates back to the 1600s, to a religious war in Scotland. Protestant rebels wore red cloths around their necks, and "redneck" came to mean any Scottish Presbyterian. When these Scots came to America, they were not welcomed by the English, who turned the word into a slur.

Y'all, a familiar word to Southern folks, originated from the Scots-Irish. For the word you, English had thou, which was singular, and ye, which in some Scottish dialects was used in the plural as ye all. When the Scottish emigrated to the American colonies in the 1700s and made their way into North Carolina and Georgia, the word spread across the South and melted into the word y'all know today.

No mere chicken of the sea, the porpoise derives its name from many iterations of the original. The Romans named it porcus marinus, meaning "pig of the sea"; in the Middle Ages, this became porcopiscus, from Latin porcus (pig) and piscis (fish). In early French, the word became porpeis, and eventually the English word became porpoise.

Ur mom might have srsly no idea how to decode the acronym-prolific texts you sent her 2day, but FWIW, our SMH-inducing shortened messages are predated by centuries by legit shorthand. According to literary critic Leah Price, before the 1870s, shorthand was used for recording one's own thoughts or for copying others'. It gradually made its way into the more utilitarian uses of stenography for things like secretarial work.

And now ATM it's used to tell your BF that ZOMG you just want to be FWB.

For a vintage look at the history of the English language, check out this WWII-era propaganda video from the British Council. Scholarship, like language, has changed a lot since then, but that just goes to show that there's clearly always a whole lot more to learn.