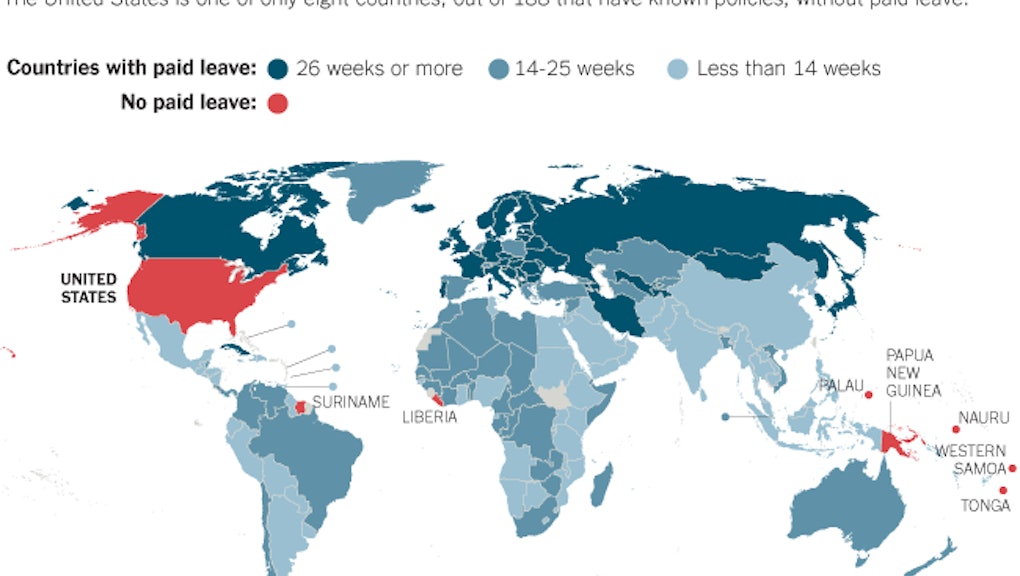 Image Source: The New York Times Source: Children's Chances: How Countries Can Move From Surviving to Thriving" by Jody Heymann With Kristen McNeill

At the Summit on Working Families on Monday, President Obama remarked on America's need to join the industrialized world by offering paid maternity leave to new mothers.

Obama said that "only three countries in the world report that they don’t offer paid maternity leave. And the United States is one of them. It’s time to change that. A few states have acted on their own to give workers paid family leave, but this should be available to everyone."

It's an issue that begs to be revisited by lawmakers in Washington. In the U.S., only 12% of all employees have access to paid family leave. And most of the time that means that only well-off families benefit from paid maternity leave, according to the Labor Department.

Partially to blame for those poor numbers are ill-equipped laws like the 1993 Family Medical Leave Act. During a year-long period, the act gives U.S. employees 12 weeks of unpaid leave for medical or family reasons but over half of workers don't take it because they don't qualify and many more don't because they can not afford to leave a position without wages. (There is currently a proposal on the Hill to expand the law but Obama hasn't endorsed it yet.)

Obama did not specify legislation on the issue of paid maternity leave. Though it is more important the he converts his rhetoric into at least some sort of proposed legislation. Until that happens, Obama is just publicly supporting a very worthy cause at a high-profile event.

During the summit, to his credit, Obama made several jokes about fatherhood and being a parent himself to daughters Sasha and Malia. Let's hope he's just as good at putting his words into action as he is at making jokes.