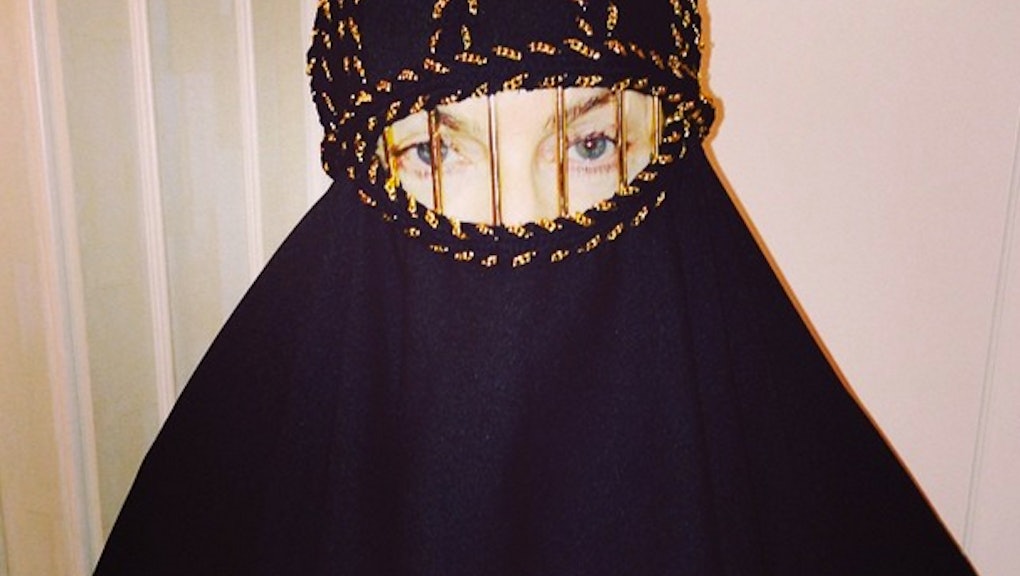 What Was Madonna Thinking Before She Posted This Offensive Instagram Photo?

On Tuesday, Madonna made headlines the only way she knows how anymore — by disingenuously appropriating a religious garment for some good old shock value. She posted this photo to her Instagram with the caption "It's that kind of day #unapologeticbitch."

In fact, she's basically done this same exact thing before. Last year, she posted a picture from a Harper's Bazaar shoot of herself wearing a chain mail niqab with the caption "The Revolution of Love is on ... Inshallah" [Arabic for "God willing"]. Kind of like her caption today, that made no sense. Is she trying to protest the oppression of women in Islamic nations? Is it an expression of female empowerment? Is it a commentary on our oversensitivity to cultural appropriation? Or is it maybe just ignorant and offensive.

But for the most part, the good people of Instagram have been less concerned with cultural appropriation and more concerned with whether or not Madonna was ripping off Lady Gaga with the look. Late last year, Gaga released a video for the ARTPOP song "Aura (Burqa)." She entices listeners with the lines "Do you wanna see me naked, lover? / Do you wanna peek underneath the cover?" turning an object meant to represent religious purity into an elaborate lingerie item.

Gaga, at least, got blasted for that. But the fact that the conversation has settled around "Which pop artist wore it first?" rather than "Why have these pop stars not learned how incredibly offensive cultural appropriation is?" is a sign of how normalized these controversies have become.

Just a few days before the start of the holy month of Ramadan, it's worth looking a bit more closely. Madonna's actions continue to marginalize Muslim women, reducing their serious spiritual choices to a playful game of dress-up — something they might do because it's "that kind of day." The way Madonna has treated this culture is fragmentary and unproductive. She deserves the backlash she's receiving, even if most of it is only because Gaga did it first.