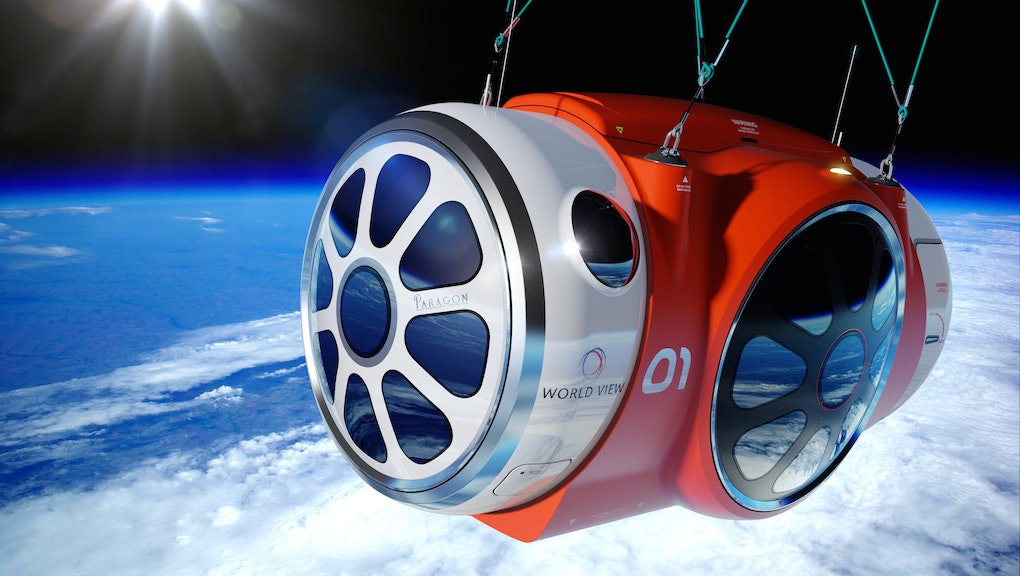 If You've Ever Dreamed About Going Into Space, You May Now Finally Have the Chance

Two years from now, for $75,000, you'll be able to head 120,000 feet into the air for a higher glimpse of Earth than any other living person (besides astronauts) has seen.

The news: World View Enterprises, the company that is running the air balloon flights, just completed its first test flight from Roswell, N.M. to the edge of the stratosphere — 20 miles above Earth.

The test balloon, which measures in at about a third of the size of the real thing, broke the world record for highest flight of a structure of its type.

The details: Beginning in 2016, the World View balloon is scheduled to lift a pill-shaped capsule carrying six passengers and two crew members 20 miles into the atmosphere. Once the structure arrives, it'll hover for two hours, allowing passengers to walk around and take in the view before floating them back down to Earth.

World View isn't alone in its quest to test the limits of commercial flight. And it's certainly not the most adventurous. Private companies Virgin Galactic, SpaceX and Blue Origin (to name a few) all have plans to send paying passengers to the edge of the atmosphere in the next decade.

Watch a video of what it'll look like to take a 20-mile flight in the World View balloon:

And then there's the competition:

Virgin Galactic: For $250,000, you can sign up to orbit the Earth in the 60-foot SpaceShipTwo with Stephen Hawking, Tom Hanks, Ashton Kutcher, Katy Perry, Brad Pitt and Angelina Jolie. Actually, Brad can't come. The craft only holds six. Since the waitlist went public in 2011, more than 640 people have signed up.

SpaceX: Although he hasn't yet managed to colonize Mars, Elon Musk is well on his way to sending paying passengers at least partially on their way. Musk, of Tesla and PayPal fame, founded his spaceflight company in 2002. So far, it's been the first privately-funded company to: 1) successfully launch into orbit and recover a spacecraft, 2) send a spacecraft to the International Space Station and 3) send a satellite into an orbiting cycle that matches Earth's rotation.

Blue Origin: Created by Amazon.com founder Jeff Bezos in 2000, the company is building two spaceflight systems: One for suborbital flights that touch the edge of space, and another for orbital flights that ride high enough to complete cycles around the Earth. So far, its test flights have had mixed results; the company doesn't currently have a set public timeline.