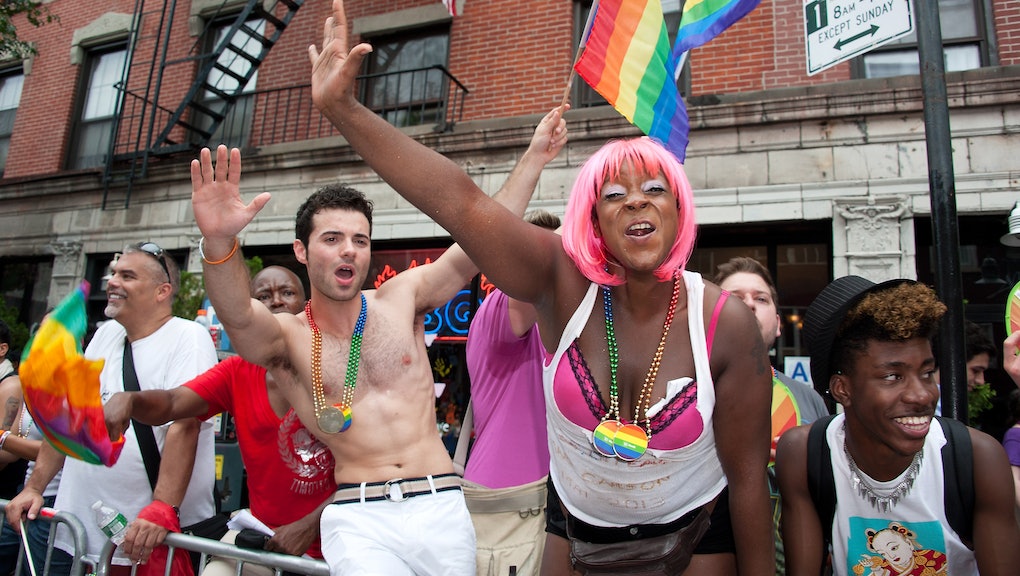 7 Facts You May Not Know About LGBT Pride

June is Pride month, a time of celebration for the LGBT community worldwide. And every year, cities all around the world organize month-long festivities to commemorate and support sexual and gender minorities' liberation.

But how much do we really know about the history of this now-global phenomenon? Test your knowledge below:

In 1969, it was still illegal for LGBT people to meet in public places, and bars that catered to the LGBT community were regularly targeted by law enforcement. Homosexuality was still classified as a mental disorder by the American Psychological Association, and LGBT people were undergoing electroconvulsive therapy and being institutionalized for expressing themselves.

The night of the riot, patrons at the Stonewall Inn, a bar located in Manhattan's West Village neighborhood, was full of its typical LGBT-friendly clientele. The police were aware that LGBT people frequented the bar and would conduct raids often. Many times those raids led to the arrests of LGBT people trying to congregate, and police brutality was not uncommon.

Sylvia Rivera, a bisexual transgender woman of Puerto Rican and Venezuelan decent, and Marsha P. Johnson, a black transgender woman, are both credited with being at the forefront of the Stonewall conflict. Unfortunately, Rivera was eventually pushed out of the gay movement due to her outspoken attempts to rally LGBT support for concerns such as the rights of transgender people, sex workers and queer people who were incarcerated. Despite their importance early on, many people have since forgotten the role gender non-conforming people of color and sex workers took on in the early LGBT movement. This has taken on increased importance amid recent accusations that the movement has become white washed.

3. The first Pride parade was co-organized by a bisexual woman.

A month after the riots, bisexual activist Brenda Howard organized a liberation day march on Christopher Street to commemorate the event. A year later, Howard was credited with co-organizing the first Pride march, and with coming up with the idea of creating a week-long Pride festival. This was the framework that shaped the Pride month we have today. Howard was a life-long activist who has been cited for her work on behalf of feminist, anti-war and most notably the bisexual causes.

4. There is a transgender Pride.

Cities including Los Angeles, Portland and Seattle all have special transgender Pride events for those in the trans and gender non-conforming community. The goal of these groups is to increase the visibility of the transgender community which, until recently, has been largely absent in mainstream LGBT events and media narratives.

Transgender individuals go through unique aggressions and suffer from some of the highest rates of psychical assaults and murders in the entire LGBT community. The elevation of their struggle for equal rights has been called the civil rights struggle of this generation by up-and-coming transgender activists and writers, including Thomas McBee.

Just a few weeks ago, President Obama again issued a special proclamation declaring June a month to celebrate LGBT Pride. The statement, which highlights the fight for marriage equality while reminding Americans that there is still further work to be done, is a positive step an acknowledgment of the Obama administration's continued commitment towards marriage equality and LGBT rights. "As progress spreads from state to state, as justice is delivered in the courtroom, and as more of our fellow Americans are treated with dignity and respect — our nation becomes not only more accepting, but more equal as well," the proclamation reads, in part. "During Lesbian, Gay, Bisexual, and Transgender (LGBT) Pride Month, we celebrate victories that have affirmed freedom and fairness, and we recommit ourselves to completing the work that remains."

June has been recognized as a de facto Pride month internationally and by the LGBT community for over 40 years. But these types of official statements from the Oval Office help to solidy the month's significance as one of celebration for the LGBT community. President Bill Clinton was the first president to issue a Pride month proclamation, and President Obama has issued one every year since 2009. President George W. Bush never issued any proclamation.

For reasons similar to those behind the concept of transgender Pride, there is a black queer Pride in many cities, which specifically serves queer people of color. The racial structures that exists outside of the LGBT community are found inside the community as well. Queer people of color have felt alienated by the movement that has, at times, appeared to cater more to the innocuous, white majority than the entire community. Black Pride events are an attempt to showcase the diversity of the LGBT community while specifically highlighting queer activists of color.

The pride flag was originally created in the 1970s. The flag, which was designed in San Francisco by artist Gilbert Baker, has multi-colored stripes that were often seen at anti-war demonstrations. Demand for the flag rose after openly gay San Francisco City Supervisor Harvey Milk was assassinated.