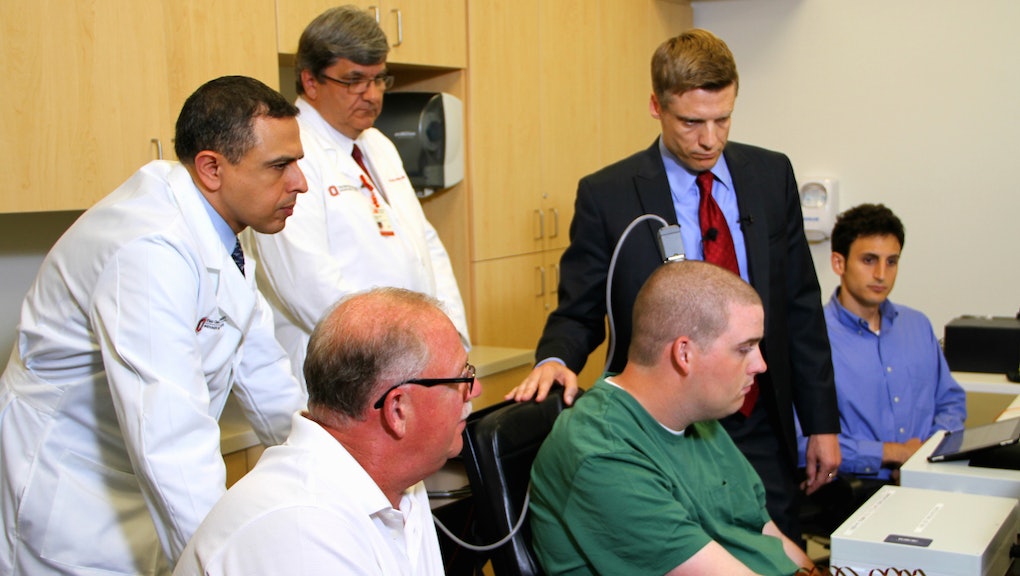 The news: A man with quadriplegia just moved his arm — with his mind.

Ian Burkhart, 23, had been unable to move his arms or legs since a diving accident four years ago damaged his spinal cord and left him paralyzed. But thanks to a new device that reroutes his brain signals, Burkhart was recently able to lift his hand using his thoughts.

The technology, called Neurobridge, takes electric signals from the brain and sends them directly to the muscles, bypassing the damaged spinal cord.

Here's how it works: Surgeons placed a corn kernel-sized computer chip inside the part of Burkhart's brain responsible for arm and hand movement. Just like the rest of us, every time Burkhart thinks about moving a specific part of the body, his brain emits a unique electric signal. The chip picks up that signal and sends it to a computer — sidestepping the spinal cord — and delivers the signal to his hand and wrist.

For extra control, an electrode-covered sleeve on Burkhart's forearm activates tiny muscle segments that give him the ability to handle precise movements, such as wiggling individual fingers.

The successful trial of Neurobridge is a historic development for people with partial or whole-body paralysis. "People with spinal cord injury have incredibly difficult lives," Ohio State University rehabilitation specialist Jerry Mysiw, who helped design the clinical trials for the technology and make sure it was safe, told Mic. "Everything from how you care for yourself to who you socialize with to where you work is more difficult. The ability to be a part of a technology that could increase their quality of life, I did not dream of it."

Previous technologies have allowed patients to control robotic arms with their thoughts. In 2012, for example, Cathy Hutchinson, — who had been unable to move her arms or legs for over a decade after suffering a stroke, — used a system known as brain-wave communication to power a robotic arm, giving her back the ability to drink her morning coffee.

Neurobridge, however, is the first that's given someone the ability to move his or her own limbs. Eventually, the researchers say, the technology could be adapted to treat other kinds of paralysis, like those caused from stroke or traumatic brain injury.

"There's a lot that remains to be done," Mysiw told Mic. "This is an important first step."