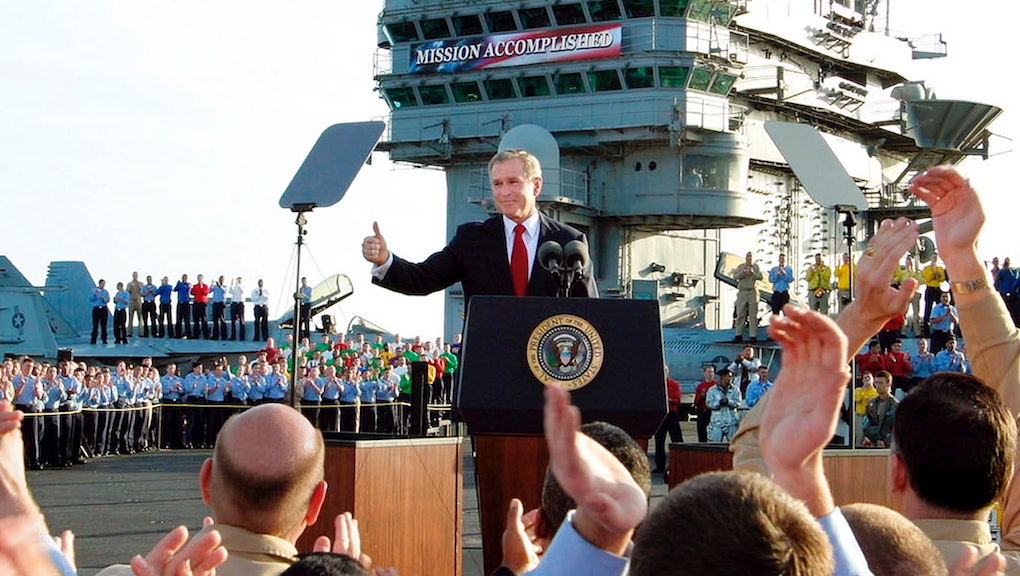 935 Reasons the Government Failed Us Abysmally on Iraq

935. That's the number of lies the Bush administration told between 2001 and 2003 about America's invasion of Iraq.

The falsehoods, which include accusations of weapons of mass destruction and unsubstantiated links between al-Qaida and Iraq, were unveiled on Tuesday in a database put together by the Center for Public Integrity (CPI), a nonprofit investigative journalism organization. It features every false statement officials made about the path to war, culled from speeches, testimonies and interviews.

According to the report, the most deceptions — 13 — were concentrated in June 2003. Former President George W. Bush was the leading culprit, making 260 false claims. Colin Powell came in a close second with 254 of his own.

The numbers are based on a 2008 study, but thanks to the new database, Americans can easily see how bad their government misled them in the leadup to the invasion of Iraq.

Below, you can see the primary instigators and the months in which the lies were the most frequent:

The background: The report comes amidst comments from the war's architects that the Obama administration is handling Iraq the wrong way —- despite their own history in the region.

The chief rationale peddled by the Bush administration included the ideas that Iraq harbored terrorists from al- Qaida, among other groups, and that the country had weapons of mass destruction that would be used against Americans.

These allegations later proved false. Numerous investigations, including those by the 9/11 Commission, found there was "no credible evidence" of ties between al-Qaida and Iraq, and Bush himself admitted that "we didn't find the stockpiles [of weapons] we all thought were there." In one particularly egregious incident, during a presentation to the UN Security Council, Powell cited what he referred to as a "fine paper" — later proven to have been sourced from old material and also copied from an American graduate student.

The media also spewed lies: According to a study by the group Fairness and Accuracy in Reporting, 64% of newscast sources were pro-war, versus a mere 10% who were anti-war. (Sources were considered pro- or anti- if they stated a policy opinion on the show in question.)

Longtime MSNBC host Phil Donahue was fired from his primetime show for his anti-war views; an internal company memo said he was a "difficult public face for NBC in a time of war." Judith Miller, the New York Times columnist who became famous for her "scoops" — later proved false — about WMDs, even saw her career fall apart as a result of her questionable reporting.

Howard Kurtz, Newsweek's Washington bureau chief, wrote for CNN that the invasion of Iraq was "the media's greatest failure in modern times."

Coupled together, the media and the administration were more than enough to sway public opinion on Iraq. Without the faulty evidence peddled by many media outlets, it's unclear whether support for the invasion would have been as strong. As the graph below illustrates, once the narrative began to fall apart, in 2006 and 2007, public support also began to falter:

The takeaway: CPI's database should be a great reminder of our past mistakes, and despite the glaring reality, officials involved still haven't taken responsibility. Worse still, they're claiming they did nothing wrong.

But if our leaders don't learn from history, we may find ourselves in the middle of another conflict. There has been a great deal of debate over the use of military force in Iraq, and even though President Barack Obama has said that American troops will not be going back to Iraq, some are calling for exactly that.

On Tuesday, former Vice President Dick Cheney told PBS that the invasion "was the right decision then, and I still believe that today." He also added that he's still not convinced Iraq didn't possess weapons of mass destruction. A leading Republican congressional candidate even went so far as to say that we actually found Saddam Hussein's arsenal.

Senate Majority Leader Harry Reid (D-Nev.) had it right: "If there's one thing that this country does not need, it's that we should be taking advice from Dick Cheney on wars," he said on June 18. "Being on the wrong side of Dick Cheney is being on the right side of history."