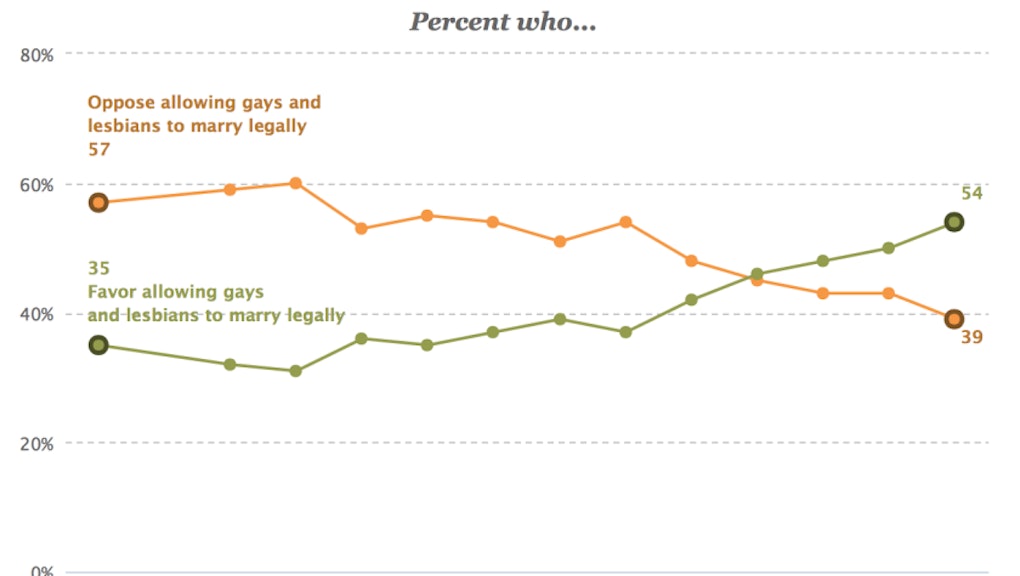 The Unprecedented Progress America Has Made on Marriage Equality, in Three Charts

Before bringing her landmark lawsuit, Windsor was just a feisty lady in love with her longtime partner, Thea Spyer. After Spyer's death, Windsor filed suit to prevent the government from seizing massive estate taxes on the money left to her, taxes that are not collected when estates are left to heterosexual partners. The lawsuit eventually reached the Supreme Court, forcing the federal government to recognize same-sex marriage and setting a precedent that has been the basis for multiple decisions striking down same-sex marriage bans at a state level.

Although several years may pass before we fully comprehend Windsor's legacy, the immediate impact isn't lost upon the 85-year-old activist, who has publicly committed to being a loud voice on many other "less mainstream" issues directly affecting LGBT people.

"There are plenty of people on the sidelines who are poverty-stricken, homeless, lacking health care, who are transgender and they are all so clearly deserving of our support," Windsor told Mic at Logo TV's "Trailblazers" event. "And it is our responsibility."

Since the Supreme Court's June 2013 ruling, marriage equality proponents have gone undefeated in the courts, 22-0, with lower courts adopting almost identical language and logic to affirm gay couples' right to due process and equal protection under the law. With oral arguments and hearings forthcoming this fall in Florida, Nevada, Idaho and in the Sixth Circuit, the undefeated streak could very well continue moving forward.

The following three charts best capture the just how quickly America has evolved on same-sex marriage, one year after Windsor.

1. For the first time ever, the majority of Americans favor same-sex marriages.

According to a Pew Research Center poll conducted in February, 54% of Americans are now in favor of gay couples having the right to marry.

Since Pew began tracking public opinion on the issue, support hasn't risen above 50%. In fact, favorable views on the issue have steadily increased since 2004, when Massachusetts became the first state to make same-sex marriages legal. Levels of public support increased, but then lingered for five years after the unprecedented move, until Iowa, Vermont, New Hampshire and the District of Columbia moved in favor of gay couples.  (Note: In the above chart, the percentages calculated for years prior to 2014 aggregate polling from the entire year. This year's figure could increase after subsequent polls are conducted.)

"Much of this change has occurred with the support of the Millennial generation and among people who said they have changed their mind on the issue, including those who have done so because of personal experience in knowing someone who is gay or lesbian," Pew said.

Another poll conducted by Pew in April 2013, just before the pair of historic court decisions, showed that nearly three-fourths of Americans believe, regardless of their position on the issue, that nationwide recognition of same-sex marriages is "inevitable."

2. Nearly half of all Americans — gay or not — live in states where marriage equality is the law.

In the year since the Windsor decision, seven states have enacted court decisions or legislation in favor of gay marriages: Hawaii, Illinois, Indiana, New Mexico, New Jersey, Pennsylvania and Washington. Now, 20 states, plus the District of Columbia, recognize same-sex marriages.

That means more than 45% of Americans reside in an area where same-sex marriage is legal, based on Mic's review of the U.S. Census Bureau's 2013 population estimates.

It's a vast departure from how the situation played out in 2004 — the year that Massachusetts, a state making up just 2% of the total U.S. population, became the first state to legalize same-sex unions. Immediately after they took the lead, at least one dozen other states approved legislation or constitutional amendments restricting marriages to "one man and one woman."

But since 2004, the story has only gotten better for people who have long desired to have their love and families recognized as equal in the eyes of the law.

According to the Washington Post, almost half of gay Americans now live in states where they can marry. Their figures, in the above chart, were based on the most recent census estimates and a 2013 report published by the Williams Institute at UCLA, which gave estimates of the gay population of each state.

3. All 30 states without same-sex marriage have pending legislation or a court case that could turn the tide.

At no point whatsoever, prior to the Windsor decision, did every U.S. state have either a law affirming same-sex unions or an active measure challenging a marriage ban. But now, that's a reality.

Before June 2013, many states' bans on gay marriages remained unchallenged in the courts or in state legislatures. But the victory at the Supreme Court emboldened many activists and their supporters nationwide, catalyzing dozens of lawsuits and new bills proposed to spread marriage equality. (Note: The above chart indicates that Indiana is "pending appeal," but there was no stay immediately issued on the ruling. Couples are marrying.)

Many of those efforts proved successful, some of them beginning not long before Windsor had her day in court during March 2013. Most of the favorable court rulings, including the June 25 ruling against Utah's same-sex marriage ban, aren't yet being enforced because of a pending court appeal.

A number of reports suggest that the Utah decision, which came down from the 10th U.S. Circuit Court of Appeals, could apply the most pressure to date on the Supreme Court to make a sweeping ruling that legalizes same-sex marriages throughout the country. It was the first time a federal appeals court ruled in favor of same-sex couples' constitutional right to marry.

Time will tell whether or not the Supreme Court follows states' and lower courts' lead, but one thing is clear: Same-sex marriages are here to stay, thanks to Edie Windsor and many other advocates rallying for the cause.