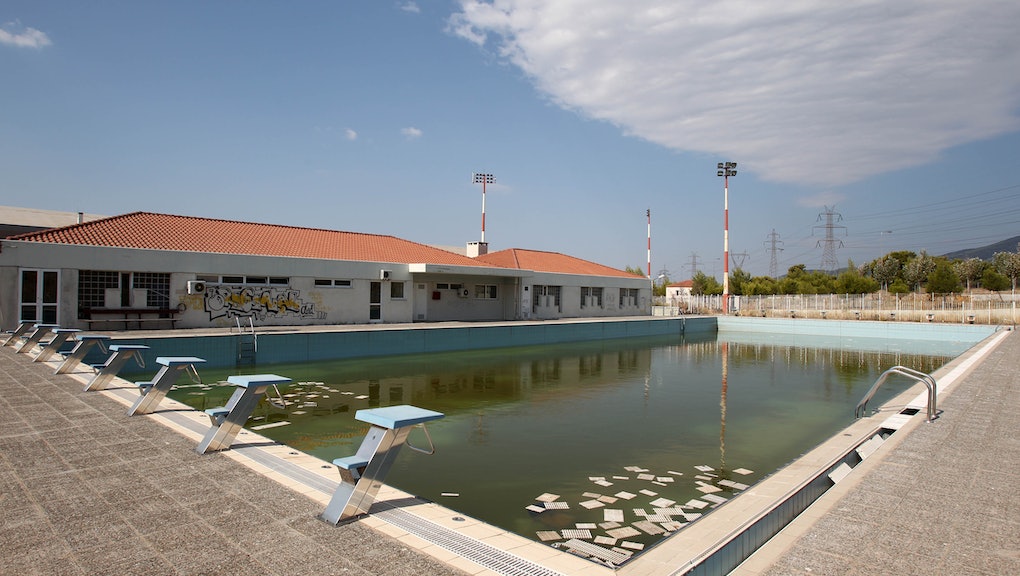 With what is being hailed as the most exciting World Cup in years in full swing, Brazil is in the midst of hosting arguably the biggest party on the planet. In preparation for the tournament, a number of new stadiums were built, in addition to others that were revamped. These are currently being filled by many of the projected 3.7 million visitors – including 600,000 foreign tourists who are flocking to the 12 host cities to take part in the soccer festivities.

Image Credit: AP. Supporters of Algeria's team during a match in Curitiba, Brazil.

What will happen to these venues when the crowds leave and the lights go out, however, is difficult to say. While some organisers of international sports events have planned for the future – the London 2012 Olympic Stadium, for instance, will be the home of West Ham soccer club from 2016 – this is certainly not always the case.

There is a track record of stadiums and other venues, often built specifically for World Cups or Olympics games, standing largely unused in the aftermath of these events. Then there are the venues – both recent and not-so-recent – that for various reasons have been all but completely abandoned.

Concerns have already been raised about the viability of four of Brazil's new World Cup stadiums, located in cities without top division soccer teams. It is too early to say for certain what will become of the country's sporting facilities after the World Cup and the 2016 Rio Olympics, but these lessons from long-gone sporting events offer a view of what could happen when a global party ends:

The 1976 Olympics almost bankrupted the city of Montreal, with its debt of almost $1.5 billion not paid off until 2006. This was partly due to the Olympic Stadium, which is widely viewed as a white elephant and has earned itself the nickname "the Big Owe".

The venues of the 1984 Winter Olympics in Sarajevo have decayed due to "neglect as much as the 1992-95 conflict that tore apart the former Yugoslavia," according to Reuters.

The preparations for the 2004 Summer Olympics in Athens were criticized for running behind schedule, with construction work reportedly going on on the eve of the games. In the aftermath, a number of venues have been left in an eerie state of decay.

With a price tag of $43 billion, the 2008 Summer Olympics in Beijing are the second most expensive games in history. However, questions have been asked of the legacy the games have left behind, with several venues underused or abandoned

Cape Town Stadium was built for the 2010 World Cup in South Africa. Nowadays, it hosts the occasional concert or sporting event, but apart from guided tours, largely stands empty – and is losing money through operating costs.

An earlier version of this story incorrectly stated the 1976 Winter Olympics were held in Montreal. Rather, Montreal hosted the 1976 Summer Olympics.