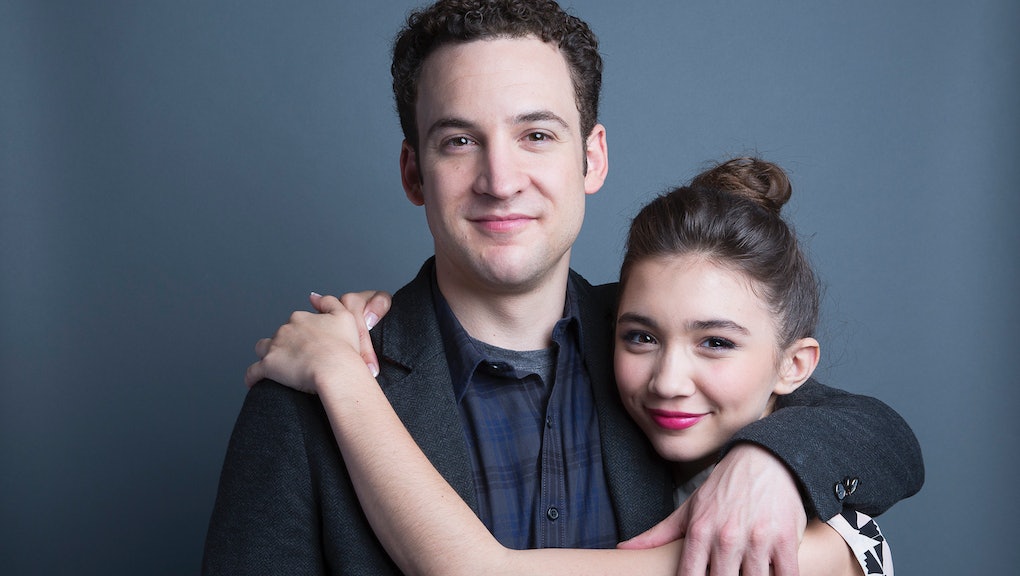 Boy Meets World went off the air on May 5, 2000. Cory, Topanga, Shawn and Eric gathered in Mr. Feeny's classroom to hear his final lesson: "Believe in yourselves. Dream. Try. Do good." Cory and Topanga then headed off to New York and their story faded to black — or so we thought.

In November 2012, the Disney Channel announced it would be spinning off the beloved series with Girl Meets World, the tale of Riley Matthews, daughter of Cory and Topanga. The hearts of 20-somethings across America swelled with joy.

After a seemingly endless year-and-a-half-long wait, Girl Meets World finally premieres Friday night (and you can watch it online now) — but let's get this out of the way early: It is not the show you remember and it is likely not the show you've been waiting for. That show, our beloved Boy Meets World, is gone and has been for 14 years. In its place is a winking, fun house mirror version of a sequel, which may leave many longtime fans heartbroken. But don't be afraid: We children of the '90s will band together in our grief and mourning. And if we work through these five steps of grief together, we may just come to appreciate Girl Meets World for what it is and love Boy Meets World even more.

Almost immediately, Girl Meets World thrusts us into the harsh world of Disney Channel sitcoms — and there's no getting around the fact that that's exactly what this show is. Still, the first stage you'll go through is denial. It's not that bad, right? Look, there's Cory! And Topanga is there too. So what if the acting is hammy and the audience laughter is dialed up to 11? We're getting new episodes with our favorite characters. Look, there's a guy named Farkle who's just like Minkus! And other old cast members are going to return in later episodes. It's going to be okay. We can't judge a show by its pilot anyway.

There is something seriously wrong with Girl Meets World and time has not been good to the family sitcom, period. Boy Meets World in 1993 had a surprisingly grounded take on what it means to be the middle child and how complicated yet heartwarming it is to live next door to your teacher. Now, everyone talks in one-liners and takes things to the most insane place almost immediately. On top of all that, Michael Jacobs' script is overt and lazy — a far cry from the Boy Meets World pilot he wrote 20 years ago. We get it, it's her turn to "meet the world." That's actual dialogue: Meet. The. World. Also, screw Farkle. Did he learn to act from SNL's Disney Channel Acting School sketch?

It's just the pilot. Comedy pilots are tough, and this one needed to pull the extra weight of paying homage to its predecessor while allowing new, young viewers to hop on. Maybe it'll get better as it develops? If we give it a few episodes, it could shake off the "big comeback" problem and become more rounded and less jarring. Ben Savage is always reliable for a laugh, and there really are a lot of fun winks at the original series, including a surprise cameo at the end of the pilot that will give you all the feels. It's even possible that Farkle will become more than Minkus — maybe he's Girl Meets World's Topanga?

Face it. Our youth is over. Girl Meets World is just further evidence we have bills, student loan debt and 10 weddings on our calendar this summer alone. We'll never again feel the joys of childhood, or of staying home on a Friday night with our best friends to watch Family Matters, Boy Meets World, Step By Step and Sabrina the Teenage Witch consecutively. The magic of the past can never be recaptured.

Let's be frank: Girl Meets World is for children. It's not for us, the 20-somethings who grew up alongside Cory, Shawn and Topanga. It's for the kids of today who get to grow up alongside Riley and Maya (who are shockingly like Cory and Shawn). Shows like Boy Meets World don't exist anymore, but Girl Meets World deserves a lot of credit for bridging the gap between old and new viewers. The best news? Girl Meets World doesn't negate the glory that was Boy Meets World. It doesn't tarnish its legacy or make it any worse in retrospect. If anything, it reinforces what a unique and fun show it was. And hey, we still have our DVDs and reruns, and if we absolutely need more Cory and Topanga (and eventually some others), we can have Girl Meets World too. We'll just have to suffer through Farkle.