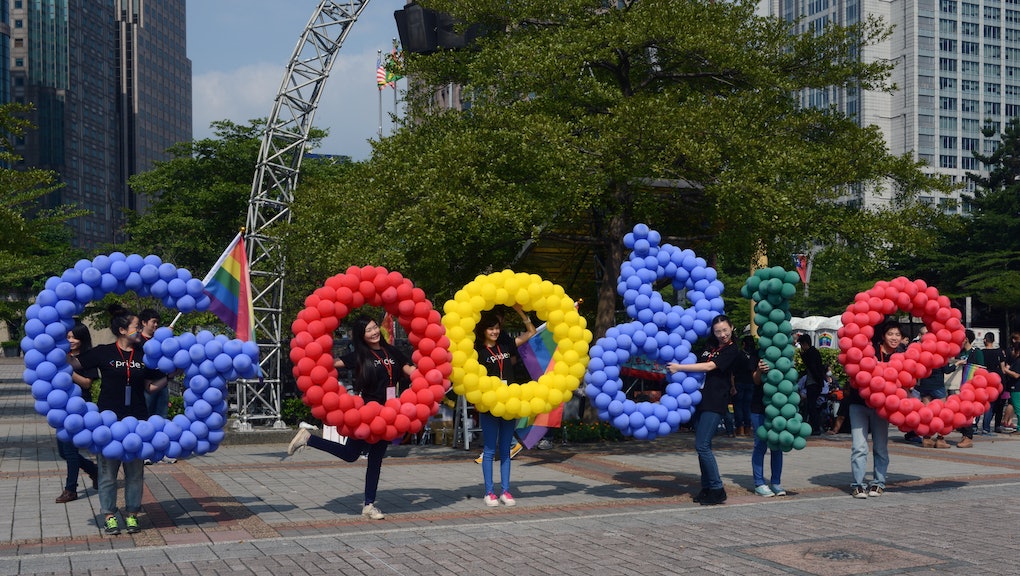 Just in time for New York City's Pride celebrations this weekend, Google has launched a secret "Easter egg" that has the LGBT community smiling even as LGBT Pride month comes to an end.

The Easter egg in question, tech slang for a hidden surprise, is available to anyone operating a spreadsheet in Google Drive. The egg is activated when you open a new spreadsheet and spell out "P-R-I-D-E," putting each letter in a separate column. When the word is completed, the document becomes technicolor, with each column illustrating one color associated with the rainbow flag.

The nifty trick is a savvy way for Google to show its support for the gay community. And while this may not have been Google's original intent, the Easter egg also serves as a visual representation of the act of coming out itself: saying, or spelling out, your pride opens a whole new world.

This isn't the first time Google has given a nod to the LGBT community during Pride Month, however. In addition to the rainbow spreadsheet Easter egg this year, the Google search bar currently changes to a rainbow background upon searching for LGBT-related items.

On its website, Google asserts, "LGBT rights are human rights:" "Though our business and employees are located in offices around the world, our policies on non-discrimination are universal throughout Google. We are proud to be recognized as a leader in LGBT inclusion efforts — but there's still a long way to go."

A long-time supporter of LGBT rights, Google Mountain View, based in California, made headlines in 2008 when it took the unusual step of publicly criticizing the state's anti-gay Proposition 8.

In an official blog post, company co-founder Sergey Brin noted that while Google prides itself on having a "diversity of people and opinions," it could not stay silent given the homophobic implications of the law.

"While there are many objections to this proposition — further government encroachment on personal lives, ambiguously written text — it is the chilling and discriminatory effect of the proposition on many of our employees that brings Google to publicly oppose Proposition 8," Brin wrote. "While we respect the strongly-held beliefs that people have on both sides of this argument, we see this fundamentally as an issue of equality. We hope that California voters will vote no on Proposition 8 — we should not eliminate anyone's fundamental rights, whatever their sexuality, to marry the person they love."

More recently, the Human Rights Campaign congratulated Google for featuring two transgender women in a Google Doodle dedicated to honoring International Women's Day, and, earlier in the year, Google made a point to celebrate LGBT athletes leading up to the Sochi Olympics.

While Google has also recently been criticized for its poor gender diversity (company statistics show that the company is 30% women, indicating that the representation of the LGBT community skews heavily "G"), the company is openly proud and supportive of its LGBT employees, nicknamed Gayglers.

"The Gayglers are an employee resource group comprised of LGBT Googlers and their allies," the company notes on its website. "The Gayglers not only lead the way in celebrating Pride around the world, but also inform programs and policies, so that Google remains a workplace that works for everyone."

It's nice to know the Internet giant is committed to practicing what it preaches.