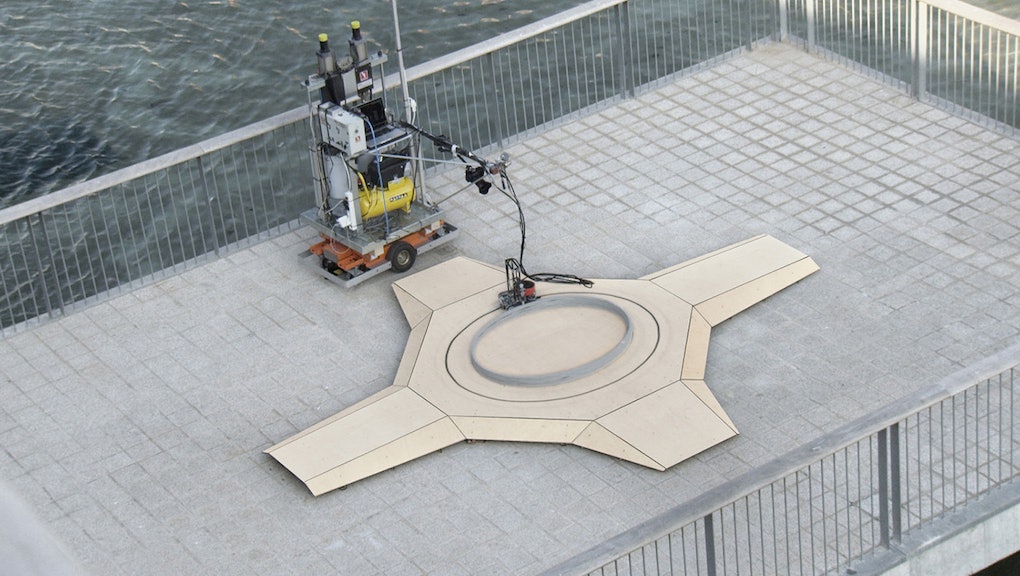 If you can dream it, these bots could print it.

The news: A team of researchers at the University of Catalonia built a cadre of miniature drones that could craft an entire building on-site.

The bots, which their inventors are calling "minibuilders," work independently, using sensors and positioning systems, but the team of three follows instructions from a central computer to coordinate their actions.

Beyond printing structures simply for art's sake, this little family of drones could build homes for the more than 600,000 Americans who don't currently have them.

While we've seen 3-D printing advertised as the solution for everything from slow construction to homelessness, these tiny bots are poised to actually make a difference. Rather than printing parts of a larger project off-site, transporting them to the site and assembling there, these critters 3-D-print in one continuous process, erecting a home or office layer by layer, right where the final structure is supposed to be.

Meet the home-makers of the future.

"Foundation" bot: This puts down the base of the structure in a predesignated pattern, using a printer at its head that rises as each successive layer is applied. A sensor at its front recognizes curves on the ground and enables steering. Once the structure reaches its final height, it's the next robot's turn.

"Grip" bot: When the foundation is done, the grip uses its four rollers to attach itself to one section, making its way around the foundation and erecting walls as it goes. Once the walls are up, "grippy" here starts shaping the building's ceilings, window frames and doors.

"Vacuum" bot: Using a vacuum-operated suction cup, this moves up and down the new building as it prints extra material to reinforce the structure.

Not sold yet? Check out this neat .gif of the bots in action, posted by Joseph Flaherty over at Wired:

The minibuilders' team of designers purposefully made the bots simple. Because they want their work to be shared, the designers crafted the drones using open-source materials. The simple frames are held together with laser-cut plastic, and the team picked up their motors and wheels from a hobby electronics shop.

There's a precedent for success: A Chinese building company is already 3-D-printing homes using a mixture of cement and construction waste. Each house costs less $5,000 to make, and the company can churn out 10 complete structures each day. Hopefully these bots can help speed up the process, especially considering that it's three times cheaper to house a homeless person than to keep her on the streets.

With this kind of work happening on a global scale, it's not hard to envision a 3-D-printed skyline crafted entirely from millions of these little drones.