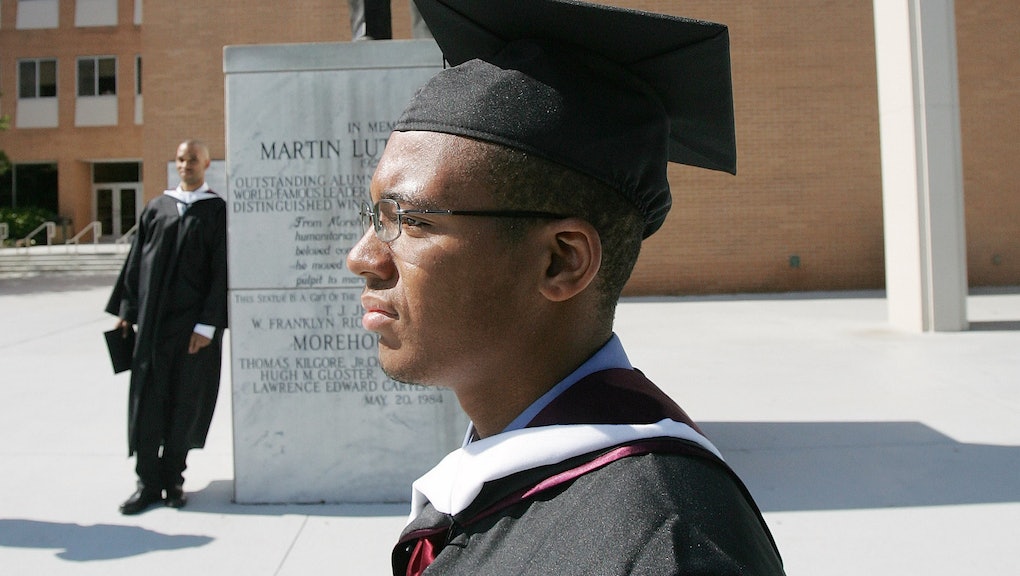 At least not for a while. Though education is often seen as an equalizer, recent data suggests its bounties can be anything but — especially when distributed across racial lines.

A new study from the Young Invincibles found that black men between the ages of 18-34 who've attended "some college" are as likely to find jobs as white men the same age who never graduated high school.

Young black men generally require two more levels of education for the same chance at employment as their white counterparts.

The silver lining, if you like, is that the gap narrows with each education level. Although this implies that school yields a "higher payoff" for blacks than it does for whites, it doesn't erase the fact that black college grads remain twice as likely to be unemployed as the graduate population overall.

Maybe it's time to go back to school. Then again, maybe not.

Background: The report is based on an analysis of recent Census data, which was used to project these figures controlling for factors like marital status, geography and whether respondents were still in school. Though its scope is somewhat limited — it stops before graduate school and doesn't account for field of study or quality of institution — the pattern it projects is consistent with what we already know about the black-white employment gap.

It's big. And it's been that way for a long time.

Unemployment rates for blacks have consistently been twice those of whites for the past 60 years, and get even higher during times of economic downturn. As Mic's Chris Walker points out, the Great Recession has been no different in this respect — a fact reflected in the starkly divergent employment figures since 2007.

The difference isn't as drastic between black and white women, but for women in general, disparity is felt more deeply in the wage gap.

And even despite narrowing employment disparities, whites make significantly more money than blacks regardless of education level.

But these patterns don't exist in a vacuum. Though their reasons can vary, many are easily identified.

Besides the legacy of imposed inequality black Americans have been subjected to throughout history that is reflected in disproportionate poverty rates and their resulting barriers to mobility, most signs point to discriminatory hiring practices. Various studies attest to this: Devah Pager has conducted years of research into the phenomenon, and found that blacks are consistently less likely to receive callbacks from potential employers than whites – even if the white applicants have criminal records and the blacks do not.

How's that for post-racial America?

Yet there is hope: Just don't ask me where to find it.

The best thing about these statistics is that they are known, and can thus direct efforts to alleviate the disparities they hint at. The Young Invincibles' study is only a limited glimpse at a problem that's persisted for decades. Now that we know the problem, it's time to get serious about finding solutions.