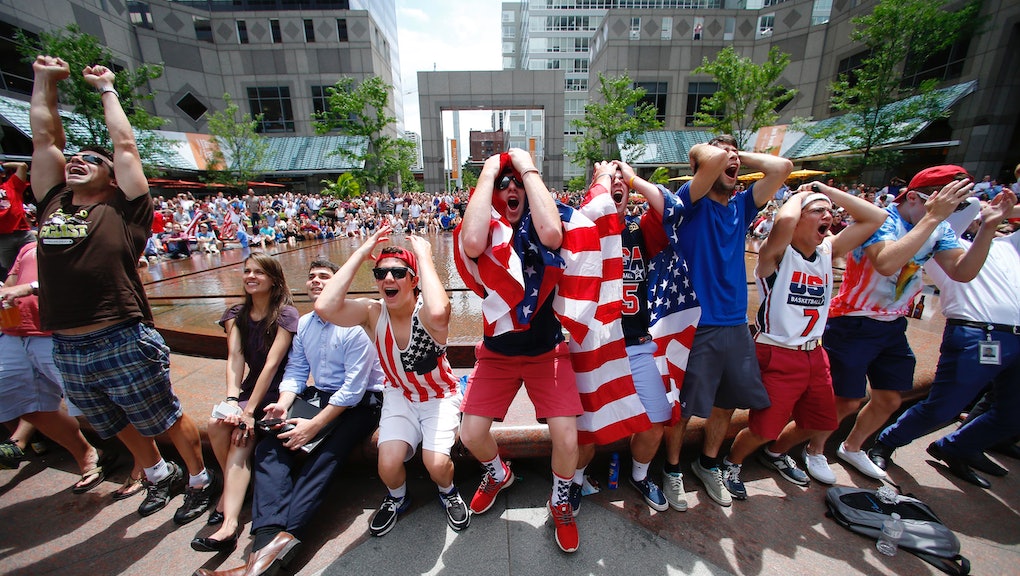 What Happened on Twitter Right When Germany Scored Against the U.S. Doesn't Look Great for America

The news: It might not be fashionable to spew racial slurs during the World Cup anymore (though they do on a near-continual basis), yet fans apparently feel it's okay to accuse the German team of being goose-stepping, Heil Hitler-ing Nazis. Especially when they score against team USA.

This graphic from Regressing shows that during the Germany-U.S. game (which Germany won 1-0), plenty of people were thinking about the former country's murderous past:

Yeah, that's nearly 25 accusations a second. Dang. Not exactly the most sportsmanlike conduct.

Regressing also picked up some example of the Nazification of Twitter during the matches.

The background: This is all in some pretty poor taste. But actual neo-Nazis have made a big showing at the World Cup, like this shirtless man who ran across the field during the Saturday match between Germany and Ghana. On his chest was scrawled the letters "HH" (Heil Hitler) and the symbol of the Nazi S.S.

In another match, Russian and Croatian fans waved neo-Nazi banners and anti-Semitic symbols. Joe Simunic, a player for Croatia, was banned from the Cup after proclaiming fascist slogans. An Instagram user saw German fans in blackface during the Ghana game, a practice sometimes still seen as acceptable in Germany.

Of course, the racism hasn't been limited to matches involving Germany. Mexican fans chanted a homophobic slur during many matches, which FIFA stunningly concluded was "not considered insulting in this specific context."

Despite FIFA's promise to punish hate speech — and even deduct teams' points for offenses — there's reason to believe this isn't the last incident of this kind. Anti-Semitism and racism are on the rise in many parts of Europe and in its soccer stadiums; in particular, the 2018 World Cup host, Russia, has a disturbing trend of violent neo-Nazism and racism (and, as Mother Jones has reported, homophobia). Some players have already called for a boycott.

More controversies: Germany has encountered some criticism for displaying a replica of a soccer jersey from 1934 displaying a Nazi reichsadler (imperial eagle).

Why can't we just play soccer and get along?