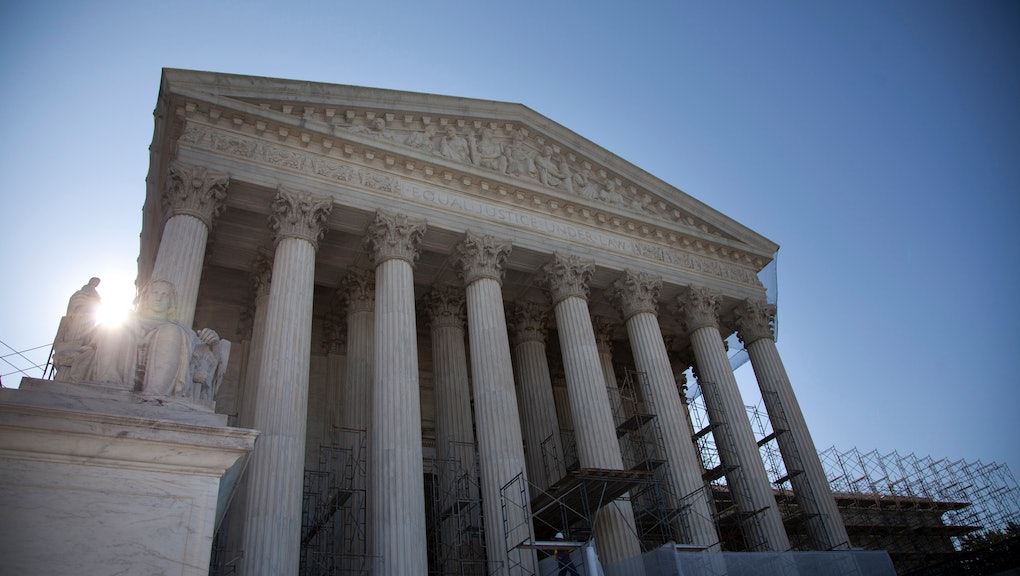 The biggest Supreme Court case of the year will be decided on Monday. The ruling in Sebelius v. Hobby Lobby will decide whether corporations can impose their religious beliefs on employees — and if so, whether or not they can deny employee access to the Obamacare mandate requiring insurance plans to cover contraception.

The case has been going up the judicial ladder for two years and this final ruling on Monday will set a controversial precedent no matter the result. The SCOTUS ruling will determine how far religious freedoms can extend, and to what degree they can be imposed on others. Either religious conservatives or liberal proponents of government-run health care stand to lose, depending on the outcome.

Hobby Lobby, the for-profit craft chain store, along with co-plaintiff Conestoga Wood Specialties Corp. have sued the federal government because they want their strong religious objections to be one of the guiding principles applied to their employees' health care coverage. Simply put, the companies don't want to pay for employee birth control, or pay a fine if they do not comply with the Obamacare mandate, because of their faith.

At the appellate court level, Hobby Lobby won an exemption to deny employee access while the Third U.S. Circuit Court ruled against the other plaintiff, Conestoga, arguing: "Corporations can't be religious."

Depending on the language used in the ruling, either narrow or broad, a number of possible outcomes are at stake. Here is a rundown of several possibilities:

Hobby Lobby loses. The 1993 Religious Freedom Restoration Act (RFRA) is a federal law that prevents other laws from substantially burdening a person's right to exercise their religion. If Hobby Lobby loses, RFRA does not apply to for-profit corporations; corporations are therefore not religious people. This would mean that the Supreme Court doesn't have to determine if Hobby Lobby's rights are violated, which would close the gateway for other companies to impose religious beliefs on employees.

The likelihood of this outcome is slim. Justice Anthony Kennedy thinks that if ruled this way, "a [for-]profit corporation could be forced – in principle, there are some statutes on the books now which would prevent it but – could be forced in principle to pay for abortions." Equating birth control and abortion is medically inaccurate, but this fear-based ideology does exist on the Supreme Court bench.

Hobby Lobby wins. RFRA would apply to individuals and to companies, and Hobby Lobby and Conestoga would neither have to pay for contraception nor pay a fine.

This would uphold the Tenth U.S. Circuit Court of Appeals ruling that extends constitutional protection to a corporation's political and religious expression. Similar to churches being exempt from the Obamacare mandate, corporations would be as well.

That would mean the floodgates may open and public corporations like McDonald's and Walmart could argue against complying with the law as well.

Hobby Lobby wins, but not completely. The court could find that there is a significant burden to the company, but that it conflicts with government policy. That means if Hobby Lobby is granted an exemption, it would harm employees. The employees wanting contraception would have to pay more than employees at non-religious businesses.

Hobby Lobby loses, but in a more narrowed scope. SCOTUS could decide that corporations can be seen like religious individuals, but that they aren't exempt from covering female contraception.

Another version of this outcome would be if the Supreme Court rules that the government does not require an "employee mandate" to pay for contraception. Companies can currently opt out of covering female contraception, and even though the corporation may be taxed slightly higher for choosing to do so, there is no penalty. So government law does not force a person or company to violate their religious beliefs. Therefore, there is no substantial burden to the corporations.

Additionally, an alternate route for the courts would be to rule that the substantial burden from RFRA does not apply here because the burden isn't burdensome enough. Employees can use their hard-earned benefits in the way they choose.

The decision will be handed down Monday morning at 10 a.m. EST.