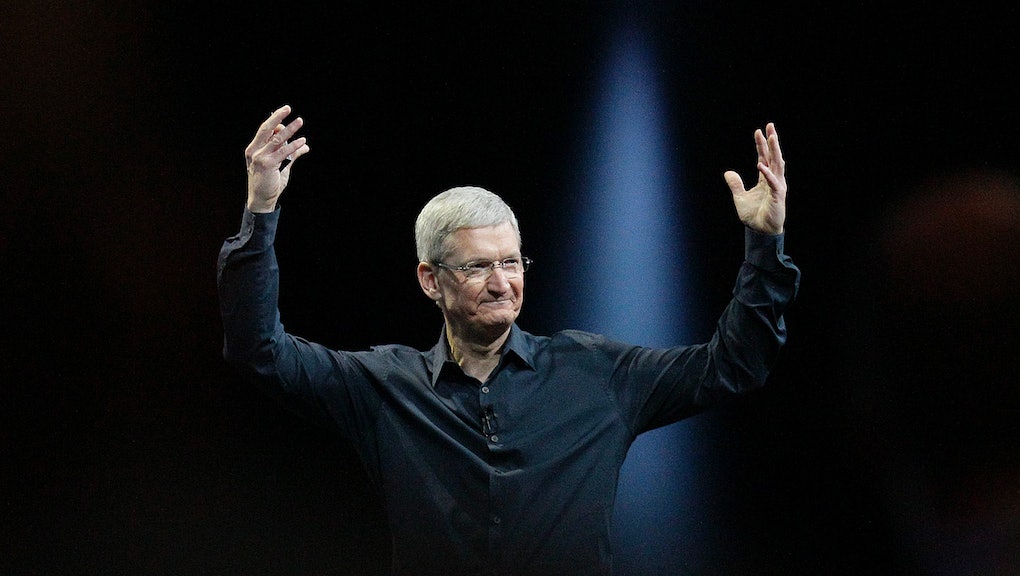 It was an exceedingly awkward moment, even by live television standards.

On Friday, CNBC Squawk on the Street co-anchor Simon Hobbs may have inadvertently outed Apple CEO Tim Cook on air.

The incident was prefaced by an exchange in which one of the show's guests — New York Times columnist James B. Stewart — mentioned the lack of LGBT representation in the corporate world. Stewart is writing a column on the difficulties faced by former BP CEO John Browne, who lived many years as a closeted executive, and told his fellow panelists that it was impossible to speak to any openly gay CEOs in major companies.

Chiming in, co-anchor Hobbs then objected with, "I think Tim Cook is open about the fact he's gay at the head of Apple, isn't he?"

Met with rather stunned silence from other panelists, Hobbs immediately backtracked: "Oh, dear, was that an error? I thought he was open about it." To which Stewart responded, "I don't want to comment about anybody who might or might not be. I'm not going to out anybody."

To some, including Hobbs, Cook's sexuality is not just a fact but a public one. For example, Cook was named the "most powerful" person on OUT Magazine's 2013 Power List.

But to others, whose responses were more of the slack-jawed silence variety, this fact was a little less public:

But this is not a simply issue of someone allegedly "outing" a public figure. If that figure is known in multiple circles to be gay, can talking about it really be equated with outing him?

Instead, the pronounced dearth of openly gay — not to mention openly lesbian, bisexual or transgender — business leaders may be more an issue of the industry, and less of their own preferences.

While Cook has never publicly confirmed his sexual orientation, he is far from quiet on gay issues, penning an open letter published in the Wall Street Journal in 2013 advocating for the Employment Nondiscrimination Act:

Indeed, the response of the CNBC panel takes on a much less empathetic pallor when viewed in the context of the Times' rather transparent dance around the issue of Cook's sexuality in its profile of the CEO earlier this year:

He often quotes Martin Luther King, Jr. and Robert F. Kennedy but doesn't much talk about the origin of his political views. The speech he gave last December, in which Mr. Cook mentioned the cross-burning, started to give some hints. “Since these early days," he said, "I have seen, and I have experienced, many other types of discrimination." All of those, he continued, "were rooted in a fear of people that were different than the majority." Apple declined to say what he meant by the reference to discrimination he experienced, but it did confirm the details of the cross-burning story.

As ValleyWag's Sam Biddle wrote: "Tim Cook is gay, as we pointed out back in 2011. Since then, Cook has been named the most powerful gay person in the world, addressed LGBT rights, and most recently (and prominently), spoken about his own experiences with discrimination."

So, to Biddle's point, and to substantiate Hobb's genuine contribution to on-air conversation, why does it seem like the Times and other mainstream media pushing Cook back into the closet?

The proliferation and democratization of new media means that not only are channels of communication between two bodies faster than ever before, there are more diverse voices participating in this conversation than ever before. So, for those of us who work in new media, or who are members of the LGBT, or business/tech communities, Cook's sexuality was already known. But for other audiences not circulating in those communities or channels of knowledge, Cook's sexuality is far from clear-cut. The moment of silence on air last Friday represents the schism between these yet-to-be connected communities or channels of information. But it also speaks to a lingering discomfort among Fortune 500 titans regarding their most prominent leaders and homosexuality.

So far, neither Apple nor Cook have commented on the segment.