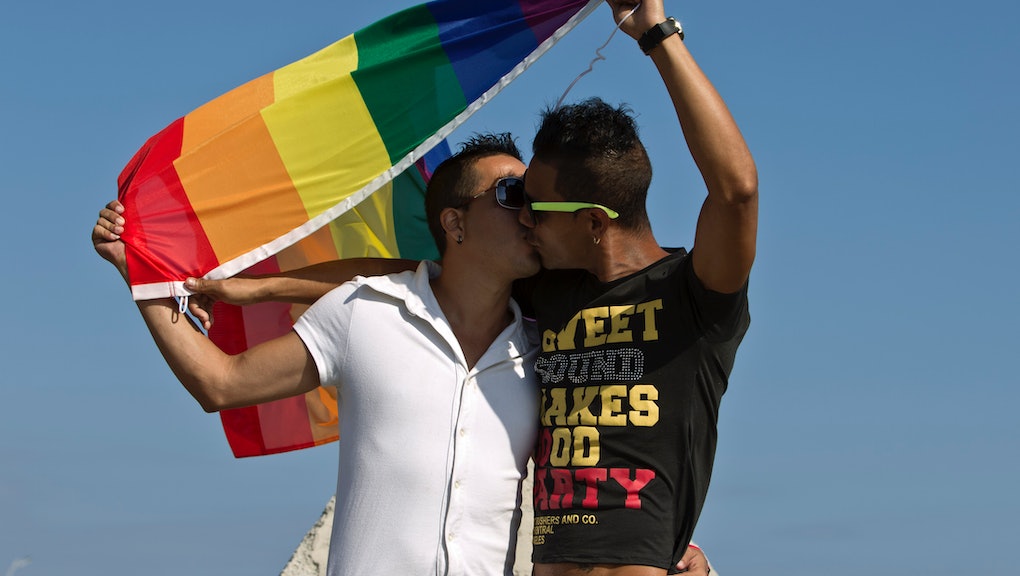 How Cuba's Gay Rights Activists Are Starting a Revolution With Kissing

Against the backdrop of gay pride in the United States — where cities are bursting with revelers and colorful parades celebrating gay rights — it's not unusual to spot groups of same-sex couples kissing.

But this past weekend, in Havana, Cuba's capital, 60 people marked gay pride weekend with a second annual "kiss-in" to protest the country's persisting homophobia and challenge the country's tight grip on dissent.

In a socialist country where organizations must align with the state's official agenda, the kiss-in is a political provocation: "to appropriate the streets, to normalize the rights of every person to be themselves, [in] broad daylight, is a political challenge in our country," Afro-Cuban journalist, activist and independent blogger Yasmin Silvia Portales Machado said in an interview with OnCuba magazine.

The kiss-in, which last took place in 2012, happened during the country's first-ever event celebrating gay pride, highlighting the struggles of Cuba's LGBTQ community for visibility.

A history of homophobia

Back in 1963, Cuba's now retired leader, Fidel Castro, used homophobia to lambast his opponents during a speech: "Sons of the bourgeois, they go around with their little pants that are too tight. ... They want to do their girlie scenes out in the open."

In the 1960s and 1970s, openly gay people were sent to forced labor camps; the government used physical labor as a way to "cure" them of homosexuality.

But Castro, and indeed Cuba, have come a long way from those days. Today, Castro has called for the acceptance of the country's LGBT community.

"Long gone are the days when political dissidents, rockers and gay people got sent to labor camps," Portales Machado told Mic via e-mail. "Even Fidel Castro apologized for this shameful episode in 2010 to a foreign newspaper, obviously, as from inside Cuba, he was never wrong."

Yet even in today's Cuba, repression still takes place in its public spaces, and gay people still face harassment from police for showing affection in public.

It's indicative of the island's social environment, which remains highly heterosexual, patriarchal and predominantly white. According to Portales Machado, "There is a sustained effort to minimize the visibility of the LGBT community in public spaces; and whenever it is possible, to minimize their needs." "This is a common practice regarding all the minorities in Cuba who are trying to claim rights, such as people of African descent, and religious, non-Christian groups."

Fighting for equality without space for dissent

The group of activists and bloggers that organized the kiss-in are part of an independent organization called Proyecto Arco Iris (Project Rainbow), the first of its kind in Cuba.

But being independent of the state also means that the people behind the project also challenge the country's tight hold on freedom of expression — a risk that activists like Portales Machado are willing to take to end homophobia in the country — a fight that will take more than lip service from Castro to tackle.

"All the time we hear from gay or trans teenagers kicked out of their homes, of people who cannot get promoted to higher job positions because their superiors repudiate their gender identities," said Portales Machado.

Fidel Castro's niece, Mariela, leads the country's state-sanctioned LGBT rights organization, the Cuban National Center for Sex Education (CENESEX). However, it ultimately represents the interests of the state, rather than the community, according to Aro-Cuban journalist Sandra Abd'Allah-Alvarez Ramírez, who studies psychology and gender at the University of Havana, and has been writing on her own blog, Negra Cubana (Black Cuban) since 2006.

"CENESEX represents Cuba, but its priorities are different than ours," Abd'Allah-Alvarez Ramírez told Mic via Skype. "We wanted to ask for equal marriage rights, for example, but that wasn't a possibility, as it involved changing the Cuban constitution."

Even pointing out that inequalities like sexism, racism and homophobia exist — contradicting the official party's line — is controversial in today's Cuba. The members of Proyecto Arco Iris believe that the country's revolutionary government should take what they view as a truly leftist stance — one that includes actively combating homophobia, sexism, and racism.

The work of Proyecto Arco Iris is only becoming more visible — and the second annual kiss-in, was not romantic, it was symbolic of an inevitable revolution for gay rights:

"There is nothing romantic in challenging state policy when it comes to civil rights of Cuba's LGBT community, and its autonomy," Portales Machado said.

But the online world is helping create more space for Cubans to call for social change — and make its burgeoning gay rights movement even more visible.

"I believe that we created a turning point with our coordinated use of several electronic communications resources — telephones and mobile phones and Internet social media," Portales Machado told Global Voices.

Fusion Net recently reported that in the past 10 years, the percentage of Cubans using the Internet has grown from about four percent to 25%. While most Internet content is blocked and filtered as "anti-revolutionary," independent sites such as Bloggers Cuba, Observatorio Critico and La Joven Cuba feature reform-minded bloggers. Some write in favor of the Communist party, others remain critical or think it needs to change, yet all offer their individual perspectives about today's Cuba.

Image Credit: Getty Images. More and more people are getting online in Cuba.

As technology only becomes more available in Cuba, the organization has more chances of expanding its work and challenging the state's tendency to make the LGBT community invisible. Still, even some of the smaller parts of organizing are complicated by the country's government.

"It's a political challenge to create electronic newsletters without permission from the National register of News Publications," Portales Machado told OnCuba. "It's a challenge to break with the information monopoly of state media and its logic, which considers the publications of any independent organization to be a threat to national unity."

But Abd'Allah-Alvarez Ramírez says that censorship is a risk that she and other activists have to take in order to finally make headway on gay rights: "I'm not afraid [of censorship] because I don't consider it possible. I fear ignorance more."

An earlier version of this story incorrectly said that Mariela Castro is the granddaughter of Fidel Castro. In actuality, she is his niece and the daughter of Cuba's current leader, Raúl Castro.