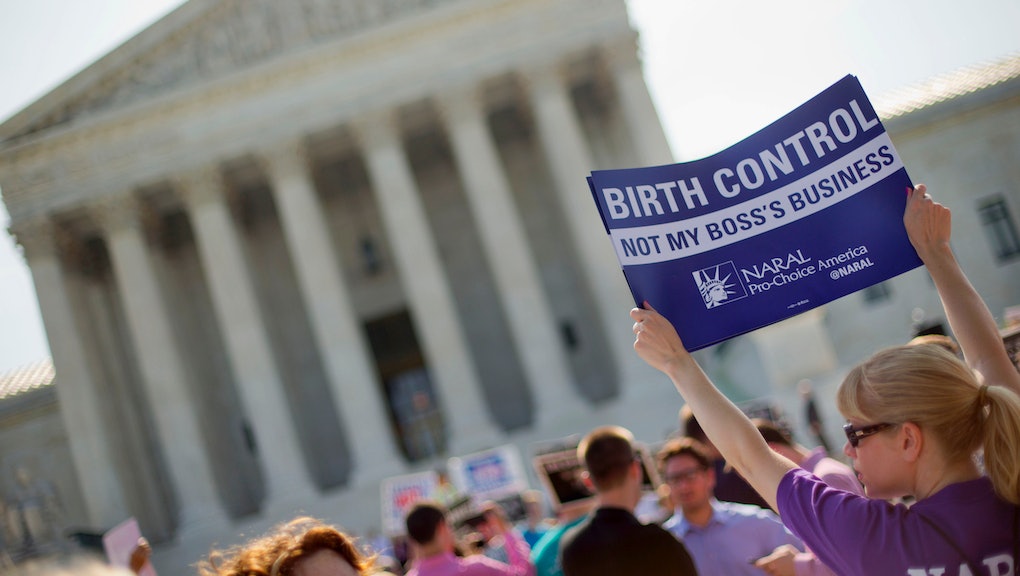 What the Supreme Court's Big Contraception Ruling Means for You, in Plain Language

The news: The biggest decision of this year's Supreme Court term has been decided. In Burwell v. Hobby Lobby, SCOTUS ruled in favor of Hobby Lobby and against Sylvia Burwell, the secretary of Health and Human Services (HHS), dealing a devastating blow to women's right to choose and in favor of religious freedom.

The decision is not a total win for Hobby Lobby. The ruling was extremely narrow and exclusive to specific corporations. How the decision will trickle down to affect female employees working at Hobby Lobby and Canestoga is limited in scope to no coverage for the four contraceptives at stake in the court case.

Here is a breakdown of what the decision actually means:

The key issue was whether or not a critical law was applied to this case. The 1993 Religious Freedom Restoration Act (RFRA) is a federal law that prevents other laws from substantially burdening a person's right to exercise their religion. SCOTUS determined that in this instance, "The contraceptive mandate, as applied to closely held corporations, violates RFRA." This upholds the Tenth Circuit decision that corporations, like individuals, can be religious ... both share the same designation.

The government infringed on Hobby Lobby's belief system. "Since RFRA has been applied in these cases, we must decide whether the challenged HHS regulations substantially burden the exercise of religion, and we hold that they do. The owners of the businesses have religious objections to abortion, and according to their religious beliefs the four contraceptive methods at issue are abortifications."

It is medically inaccurate to equate birth control to abortion, but the court did recognize that Canestoga and Hobby Lobby feel this way. And therefore, the court deemed that covering contraception as part of an offered health care plan for employees would infringe on their belief system.

Let the government pay for it instead. SCOTUS decided that even though private corporations don't need to cover contraception, the government should pay for women to access birth control.

The court's suggestion was that "the most straightforward way of doing this would be for the government to assume the cost of providing the four contraceptives at issue to any women who are unable to obtain them under their health-insurance policies due to their employers' religious objections."

Corporations are considered persons, similar to the Citizens United case. "No conceivable definition of the term includes natural person and nonprofit corporations, but not for-profit corporations," the decision stated. Therefore, corporations can have religious faith and that faith can carry throughout company policy like not covering birth control for female employees.

This won't lead to businesses like Walmart and McDonald's applying the same logic. The Supreme Court limited the application of this ruling to closely-held corporations (which is a company in which at least 50% of the stock is held by less than five people), by determining that "these cases, however, do not involve publicly traded corporations, and it seems unlikely that the sort of corporate giants to which HHS refers will often assert RFRA claims."

The "substantial burden" for the company is the money. The decision says that Hobby Lobbby could end up paying $1.3 million per day or $475 million per year in taxes for not covering contraceptives in their health care plans for employees per a penalty. The court finds this to be significant enough that they should not have to pay the fine and now will not have to.

The 5-4 SCOTUS ruling is key because it will allow religious for-profit companies to impose certain religious beliefs on employees. Meanwhile, it is a worrisome decision because female contraception should not conflict in any way with a company's religion. The problem is that even with a narrowed decision, there will certainly be a misuse of the application of the law, and women's rights are at the epicenter of that possible future. Further, this decision could be used as a stepping stone for future cases that deal with contraception, Obamacare and the rights of organizations and corporations.