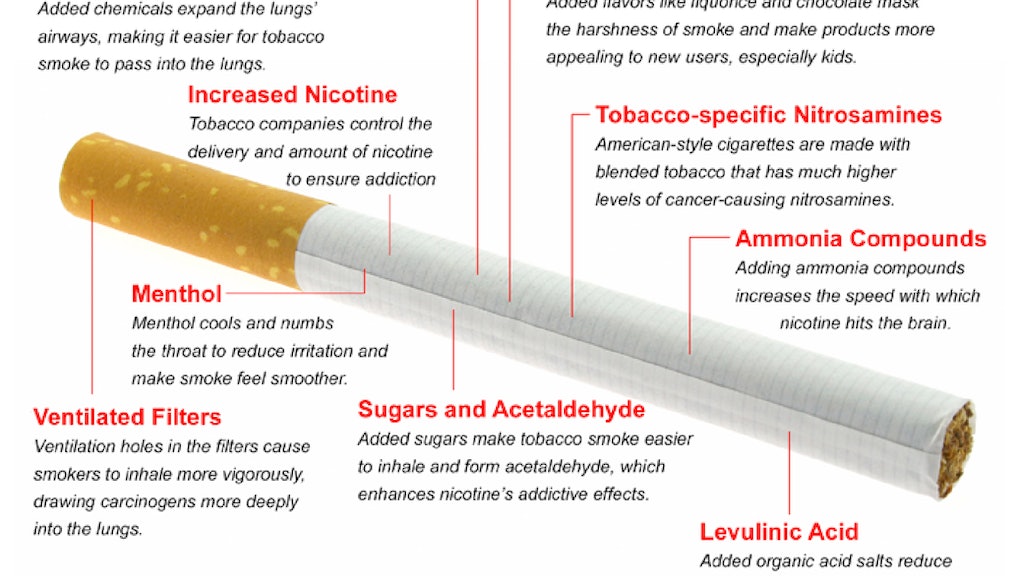 The news: A new report from Tobacco Free Kids shows that since the 1960s, U.S. tobacco companies have been making their products more deadly and more addictive.

The "big three" cigarette makers — Philip Morris, R.J. Reynolds and Lorillard — have progressively engineered their cigarettes to make them not only easier to smoke but to deliver more of their key addictive ingredient: nicotine.

The key changes they've made in the past five decades include:

2. Adding ammonia, which speeds up the delivery of nicotine to the brain

More nicotine is key to a more addictive cigarette. As W. L. Dunn, one of Philip Morris' lead researchers from the 1970s said in an internal company conference, "No one has ever become a cigarette smoker by smoking cigarettes without nicotine."

Here's how it works: When you inhale cigarette smoke, the nicotine inside the cigarette travels into your lungs, where it gets absorbed into the bloodstream and carried to the brain in seconds. Because it's so addictive, a group of European scientists wrote in a 2010 report that tobacco has a higher risk of addicting its users than heroin, cocaine, alcohol or marijuana.

Between 1999 and 2011, cigarette companies increased the average nicotine yield, the amount of nicotine delivered in smoke, by almost 15%.

This might seem like a small increase, but it has substantial effects. Today's cigarettes are not only easier to smoke and more habit-forming, but are also more likely to give you cancer. More nicotine means more nitrosamines, the cancer-causing chemicals formed when tobacco is cured.

Why it matters: Tobacco use remains the leading cause of preventable death in the U.S., killing close to 500,000 Americans every year. And despite the fact that smoking rates across the country have plunged in the last several decades, tobacco companies continue to target low-income Americans, more than 28% of whom still smoke.

In response to continued smoking in the U.K., British doctors recently moved to ban cigarettes outright. In June, the British Medical Association, the same agency that successfully helped push through a ban on smoking in public in 2002 and smoking in cars with children in 2011, voted "overwhelmingly" to bar the sale of the products to those born after the year 2000.

Policy makers in the U.S. are fighting a slightly different battle. The Food and Drug Administration has tried to rein in tobacco companies since the 1990s, but failed to successfully enact any laws controlling tobacco marketing until five years ago, when Congress explicitly outlined the agency's power in the Family Smoking and Tobacco Control Act of 2009. Still, the agency has had mixed results — when they tried in 2013 to make cigarette companies change their labels to make the health hazards of cigarettes more obvious, for example, the manufacturers sued and blocked the mandate.

Perhaps the report will be just what Congress needs to prove that today's cigarettes are even more deadly than the ones Don Draper peddled for Lucky Strike.